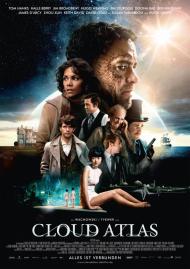 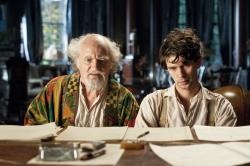 Cloud Atlas is as ambitious in concept as it is sprawling in scope. Taken from the 2004 novel of the same name by British author David Mitchell it spans numerous centuries and occupies more than one planet. Its main themes are reincarnation and the effects of karma on future lives. Six different stories are interwoven with the same ensemble cast playing a variety of roles. Each of the main character's lives from each historical epoch is read about or somehow observed by a character in a future existence. Cloud Atlas credits three different directors, Tom Tykwer, and Lana and Andy Wachowski.

The six stories (in chronological order) are as follows...

In 1849 a young man from America named Adam Ewing gets shipwrecked in the Chatham Islands. On the ship returning to America he saves the life of a slave that has snuck aboard and he's being treated by a doctor for some mysterious island malady.

In 1973 in San Francisco, a journalist named Luisa Rey investigates the safety of a nuclear power plant. Luisa meets an elderly scientist who was once Robert's lover. She reads some old love letters the two men wrote to each other.

In 2012 England, a book publisher receives Luisa's story in the mail in the form of a thriller-type novel. When he pisses off some gangsters he winds up hiding in an old folks home where he is held captive against his will (this is the one story out of the six that is played for laughs).

In 2144 a cloned woman called Sonmi-451 joins a rebellion. Her connection to the previous character is that she watches a movie based on his daring escape from the nursing home.

The final story takes place 104 years “after the fall” of civilization on a tropical island. The main characters in this story watch a hologram image of Sonmi-451 who has since become a famous martyred figure.

Although it features plenty of action and the one story I mentioned above is quite funny, Cloud Atlas suffers from several flaws. First of all the conceit of having the same actors play different characters is taken to the extreme with the use of facial prosthetics. Caucasians play Asians and vice versa. I get the point the filmmakers are trying to make, it's not a subtle point after all, that we are all the same under the skin. Still it just looks ridiculous. Jim Sturgess's Asian make-up reminded me of Marlon Brando's in The Teahouse of the August Moon.

My other complaint is the manner in which the villains are portrayed. It's not enough for them to be run of the mill bad guys. They are all shown to be incredibly vile racists. In fact the heavy handed manner in which the issue of race is dealt with throughout the movie is about as sophisticated as a 1970's After School Special.

And speaking of the 1970s, Cloud Atlas pays homage to one of that decade's most famous dystopian future sci/fi movies; first for laughs and then later for real. Actually, now that I think about it, Cloud Atlas is like a combination of parts from various other movies as well. In addition to Soylent Green, take a little China Syndrome, bits of Blade Runner, add a dash of One Flew Over the Cuckoo's Nest, a smattering of Amistad and shake well.

Now for the good things. Cloud Atlas provides a sumptuous feast for the eyes and it's crammed with details that link the different stories together. I'm sure I missed many that I would notice upon repeat viewings. The cast, despite the unfortunate make-up, do good work playing the various characters. You have to give them credit for putting aside their vanity and agreeing to look so hideous onscreen. Actors are notoriously vain after all.

The best way for me to sum up this audacious film is to call Cloud Atlas an interesting failure. 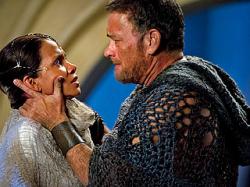 I agree with Patrick. Although there are some entertaining moments, with both impressive visuals and performances, ultimately Cloud Atlas is unable to assemble all of its different parts into a whole that feels worth the time and effort needed to watch it.

While Patrick pointed out the themes of reincarnation and karma, a deeper theme seems to be about oppression. In 1849, it is the African slaves. In 1936, it is homosexuals. In 1973, it is the rich oppressing the poor, or at least lying and manipulating them to gain profit through fear. In 2012, it is the elderly. In 2144, it is the fabricated humans. And in the final story, it is the age old oppression of the strong oppressing the weak. In every era, there is one group being controlled by another.

With so many interwoven stories, it's inevitable that this would be a long movie and yet even so, it runs longer than needed. The earliest story spends too much time with Adam Ewing suffering from his fever on-board the ship. The 2012 publisher's story, which provides some of the most purely entertaining moments, could have been trimmed by removing Tom Hanks' author and Susan Sarandon as the first love. Sonmi's escape is spectacularly filmed, but does nothing except provide the chance for some Sci-Fi eye candy. I mean, do we really need to see her escape, get caught, and then escape again? There are other areas that could have been trimmed, but those are the main ones.

The choice of having the same actors play different parts in each time era is an interesting one. It's never explicitly stated, but is heavily implied that they are supposed to reincarnations of the same people. Luisa Rey's story does sort of muddle this theory however. How can Hugo Weaving be both Bill Smoke in 1973 and Nurse Noakes in 2012. Is Nurse Noakes supposed to 39 or younger? Likewise, Tom Hanks appears in both of those eras, so again we must assume that his gangster character in 2012 is younger than 39, something that his look belies. Interestingly, in the original novel, the Luisa Rey storyline is purely fictional, which would remove these possible discrepancies. Certainly I agree that the prosthetics used to make occidental actors look oriental and vice-versa, never really works and instead of making the stories feel more connected, simply reminded me that I was watching a movie.

Interesting, yes. Ambitious, yes. Occasionally entertaining, yes. Beautiful to look at, most definitely. And there's no lack of good acting performances, but no matter how you arrange the pieces they just never form a satisfyingly complete puzzle. 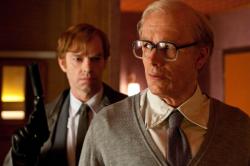 I agree that Cloud Atlas is an interesting failure and an unsatisfying puzzle but not because it is missing anything. It contains drama, comedy, romance and action. It may likely cause conversation with its many interesting details. The cast is brilliant throughout most of the movie, minus the ethnicity issues of course.

The problem with Cloud Atlas is simply that there is too much going on. Six stories play out with similar themes. Each is somehow connected to the others. Is it reincarnation? The movie never states that exactly but it certainly hints at it. Lines like, “Our lives are not our own. From womb to tomb, we are bound to others. Past and present. And by each crime and every kindness, we birth our future.” Can be interpreted a couple of different ways.

The most interesting aspect of the film for me is how each story has been affected by a previous one. This serves to remind us all that our lives may have a greater purpose than we may ever know. What an awesome message and piece of inspiration. “My life extends far beyond the limitations of me.”

Although this movie provides some food for thought to go with the feast for our eyes, it is several courses too many. The point that we, or our ideas, may live on after we have died could have been explained in fewer segments. Cloud Atlas could make an excellent mini-series. Take each segment apartment and view them each as a whole, instead of bouncing back and forth. I think I would have liked these stories better had I viewed them that way.