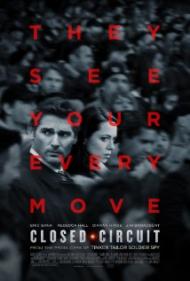 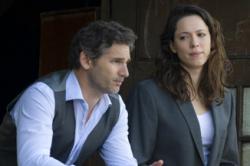 Closed Circuit wants to be a smart political thriller, but frankly it lacks the smarts. The premise is there, but it's executed so poorly that it lacks tension and intrigue, which are the two most important ingredients of any thriller. There's an attempt by the filmmakers to try and throw in some action, but that never really works either. The end result is a rather dull affair that limps to an unsatisfying ending.

There are reportedly nearly 2 million CCTV cameras in the UK, although some reports place that number even higher, claiming that there is one camera for every 14 Britons. From the title of this film and its opening scene, which features CCTV coverage of an explosion in a public London marketplace, you would assume those cameras and the protection from crime or the invasion of privacy they represent, depending upon which side of the argument you land on, would play a major part in the story, but you'd be wrong. They barely enter into the plot and the ethics of using them is never discussed.

The plot that at first seems dense and complicated, turns out to be quite simple. A middle-eastern man is arrested for the bombing that takes place in that opening scene. His trial is to be held in two stages, one public and one private. Due to the nature of the evidence to be used against him it has been decided that it can not be revealed in open court. Two different lawyers are to be used for his defense. One for the public portion of the trial and another for the private sections. The two lawyers are to have no contact with each other.

Eric Bana stars as Martin Rose, the lawyer who is assigned to the public portion of the trial after the previous attorney commits suicide. He keeps it a secret from the judge that he was once in a relationship with Claudia, the defense attorney who will be handling the private portion of the trial. After the barest and simplest of investigations, which merely involves Martin checking the accused's spending habits and asking him a point blank question, Martin discovers that the accused was really working for MI-5 and the explosion was part of a botched sting operation. This is a fact that the government will do whatever it takes to cover up, including going on a murder spree of unbelievable proportions. The problem with this cover-up is that it only requires one murder, but the kill-happy government seems eager to kill everyone else except the one person who could actually reveal the truth.

The story unfolds predictably and by the book. Martin and Claudia's relationship develops on cue and the betrayal by a colleague happens right on schedule. There's not a surprise in the entire film despite an attempt to build tension and a sense of paranoia.

The British government is presented as evil and corrupt, willing to do whatever it takes to not look bad, including cold bloodily killing its own citizens. Even if you're a conspiracy theorist who believes that is true, you'll have trouble believing they would be so incompetent and blatant about it. Even harder to believe is the way Martin and Claudia shrug it all off by the film's end.

Bana, Hall and the rest of the cast all do good work and the film is shot stylishly. However, nothing they do can overcome the dull predictability of the script. 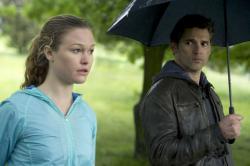 Ever since the events of 9/11, which seems to be some of this films inspiration, the subject of information has become more and more of interest to a growing amount of concerned citizens. First we were told that 9/11 could have been stopped if the different government agencies had shared what they knew with each other.  Then we were given the Patriot Act by George Bush, which allows the U.S. government to legally spy on its own citizens in the name of their security. Then CIA employee Edward Snowden leaked the information that the U.S. government was in fact doing just that.

Closed Circuit thrives on conspiracies that some can relate to current events and some believe more and more are true. The theme of the film is the lack of privacy. Not only are there cameras everywhere, but our cell phones and internet activity is available to others with the ability to research them. Closed Circuit drives home the issue of privacy as often as it can. From the crowded streets to the many cameras, we are reminded of just how limited privacy can be in this modern world. When the priest at the funeral is talking about the deceased, he rhetorically asks, “Was he alone?” When we see Claudia in her apartment we do so from the outside, through her large windows.

As Scott explained, the accused here was actually working for MI-5 and the explosion was part of a botched sting operation. Before this film came out I heard this same theory about the Boston marathon bombers. The British government here will do whatever it takes to cover up their connection. Hasn’t the U.S. government done everything it can to cover up what really happened in Benghazi?

Where I really agree with Scott is that it makes no sense for the British government to kill so many when all it has to do is kill one to keep their secrets out of public domain. Or, why not just hire a lawyer who has already been paid off?  One who would not so easily discover or even care about the truth. If this government has the power to easily kill innocent citizens, certainly they can find a barrister they can pay off.

The government in this film is so stupid that they actually send an agent to court who can answer questions. Why not do what they do here in the United States and send someone who does not know everything so they cannot reveal everything. Remember when the Senate committee questioned the Obama Care web designers and all they ever answered was that they did not know or that was someone else’s job.

At the end of the film we hear an audio rant of someone asking the Attorney General, “Does he still consider our legal system to be fair and transparent?” It is reminiscent of one of Barack Obama’s false promises, “Transparency and rule of law will be the touchstone of this presidency.”

Closed Circuit is definitely a film for conspiracy theorists. So much of what is shown here is relatable to what has happened, or is happening, in the real world. Big brother is watching and he wants you to not ask too many questions.