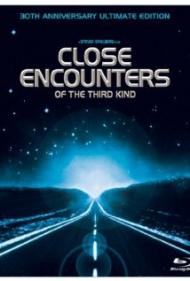 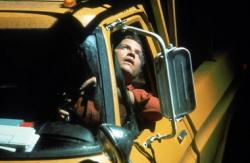 Richard Dreyfuss having a close encounter.

Close Encounter of the Third Kind was Steven Spielberg's follow up film to Jaws (1975). He was the hot new director, but he had yet to prove whether or not the success of Jaws was merely a fluke. Close Encounter of the Third Kind demonstrated that although he still had some things to learn, he was in fact, a force in film making to be recognized. His next film was his most notorious flop 1941 (1979), but he rebounded in 1981 with Raiders of the Lost Ark, and he would rarely again be doubted.

With Star Wars (1977) tearing up the box office and UFO sightings a frenzied fad, science fiction films had found new life and audience. With Close Encounters, Spielberg approached the UFO craze of the time as if it were merely a matter of time before we made contact. It begins with a French scientist, Lacombe, traveling the world to find planes and a ship deposited in odd locations. They were all believed lost in the notorious Bermuda triangle decades before. He also discovers a five note piece of music that is somehow a message from space. It will get stuck in your head.

We also meet two Americans. Roy Neary is a married father. After he encounters some UFOs, he becomes obsessed with an image of a mountain, making the shape in his shaving cream, mashed potatoes and eventually a huge model in his living room. It causes huge problems in his marriage. The other is Jillian, a single mother of a small boy, Barry, whom some aliens seem very interested in. They visit her home twice and eventually abduct her son. She likewise becomes consumed with the mountain image, drawing picture after picture of it.

The two live near each other in Indiana, and eventually join forces after they discover what the symbol means. They meet others who had the same vision and everything culminates with the arrival of the aliens' mothership. Scientist want to control the meeting arranged by the aliens and try to keep Roy and Jillian away. Lacombe's assistant eventually understands, "We didn't choose this place! We didn't choose these people! They were invited!" To which Lacombe adds, "They belong here more than we."

There are some incredible moments in this film. Notice that we never actually see the aliens visit Jillian's home. We hear noises and see plenty of moving lights. Objects move around the home, with the most famous moment being the screws on the vent seeming to unscrew on their own. Barry sees the aliens and we see Barry's reaction to them. It is a brilliantly filmed tease.

Spielberg took writing credit, although it is based on others work. He may be a brilliant director but the story is flawed. I never felt Roy's frustration over the mountain image. He lets it destroy his family and later shares a romantic kiss with Jillian. Why am I supposed to root for him when he so easily hurts his own family? Jillian is a much more sympathetic character, as she simply wants her son back. They should have been married and Barry their son.

Another flaw is in the 137 minute length. It takes far too long to get to the mountain. It would not have been so noticeable if Spielberg had simply eliminated Lacombe's part up to the final scene. We never become attached to his character any way. His most notable trait is his accent. Roy and Jillian are intended to be the emotional center, while Lacombe merely gives plot exposition that comes out on its own anyway. Note that for E.T. (1982) Spielberg did just that, cutting the part of the man searching for the alien, leaving the focus on Elliot and his siblings.

Close Encounters of the Third Kind is not Spielberg's greatest film, but it definitely shows his developing genius. 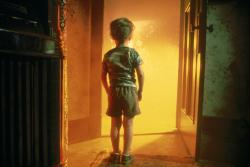 Cary Guffey in Close Encounters of the Third Kind.

The idea for Close Encounters was reportedly with Spielberg for many years and was partly inspired by a childhood event in New Jersey when his father took the family to see a meteor shower late one night. Even before Jaws, he was working on a deal with Columbia to make a Science Fiction film, but it was that movie that gave him the clout and box office credibility to move ahead with it. And despite concerns from the studio that it was more serious and less an adventure story than Star Wars, 1977's earlier Sci-Fi blockbuster, it went out to positive reviews and became a huge moneymaker.

I agree with Eric that the film does run long, but I disagree with what could have been trimmed. I enjoyed the family drama with Richard Dreyfuss, but I also enjoyed the scenes with the scientists running around the world investigating the return of long lost planes, ships and odd musical messages from the sky. If I were going to trim anything, I would trim the finale with the alien ships at Devil's Tower. The scene is played out slowly, with attention to detail and the mother ship is quite beautifully done, but it doesn't need to go on for nearly fifteen minutes of dialogue free scenes. All that this overly long light show seems to really do is cover the fact that we aren't given any solid answers to anything except the confirmation that everything that happened earlier was caused by aliens, but without a solid explanation as to why or what their intentions were in behaving as they've done.

Unlike Eric I was able to root for Dreyfuss's character. The aliens implanted the obsession of Devil's Tower within his mind. It's not as if he was voluntarily hurting his family. You could just as easily turn it around and say, "How could I care about his family, or at least his wife, when she abandoned him when he asked for help and when he was clearly suffering from some form of mental illness?" Although, even Spielberg has said in interviews that if he were making the movie today, now that he has children, he would never have had Neary leave his family and go on the mother ship.

As with many of Spielberg's films, this one is very cinematic. Every scene seems made for the big screen, even the smaller moments. Eric mentioned the scene at Jillian's house when the aliens visit. It's one of the greatest scenes Spielberg has ever filmed. As Eric said, we never see the aliens, except through the character's eyes. The mother's filled with fear, the child's filled with wonder. Spielberg was asked in 1990 to pick one single image that summed up his film career, and he chose the moment young Barry opens the door in this scene, saying, "That was beautiful but awful light, just like fire coming through the doorway. [Barry's] very small, and it's a very large door, and there's a lot of promise or danger outside that door."

We have often written on this site about how movies are a window into the past. Usually, however, we're talking about much older movies than this one. This movie though, is a window into my own past. Seeing the Leary house was a little like looking at my own childhood. The clothes, the hair, the television set with a dial and an antenna, the car radio with push buttons to change the channel and many other things were perfect reminders to me of a younger time in my life. Although he was really just making a modern movie, Spielberg also captured a moment in time.

Despite finding the ending to be a little anticlimactic, I still enjoyed this movie very much. The buildup and anticipation toward that ending, more than make up for any disappointment.

One of many iconic images in Close Encounters of the Third Kind.

3 different versions of Close Encounters of the Third Kind have been released over the years, the original theatrical version in 1977, The Special Edition in 1980, and The Collector's Edition which received a limited roadshow release in 1999 and is the “official” version released on DVD. Upon the insistence of the studio The Special Edition included a peek inside the mothership. Spielberg thought this was a mistake and deleted it from the Collector's Edition, which is the version that Eric, Scott and I watched and reviewed for this site.

I think both of my brothers bring up valid points but to me this remains a 4 star classic. I love how Spielberg builds up the mystery of the story. It doesn't follow the formula of most sci-fi movies but rather takes the viewer on a journey. And for once the aliens aren't bent on taking over the planet and making us their slaves before they devour us.

There is a spiritual aspect to the story. The aliens communicate through music as well as telepathically inducing visions in their chosen subjects. This is done in an almost biblical manner. Note the scene where DeMille's The Ten Commandments is playing on television in the Neary living room. Like Moses Roy and Jillian go on a pilgrimage, only to Devil's Tower rather than Mt. Sinai, where they meet other pilgrims who have been contacted. But these two are the only “chosen ones” with the fortitude to get up close to the ship.

The use of light and music is very innovative. Although Spielberg had a then generous budget of $20 million he was very creative in his use of special effects. I agree with both Scott and Spielberg himself about the scene where Barry opens the door (see photo in Scott's review). It is as beautiful as it is iconic and not only rates as one of the most memorable scenes in a Spielberg picture but as one of the single greatest moments in all of cinema.

Richard Dreyfuss deserves a mention for his performance as Roy Neary. He really captures this everyman who becomes obsessed with a vision in his head to such an extent that it destroys his family (although I don't think their problems are insurmountable). But these aliens, like the God of the Old Testament, are jealous beings who demand attention be paid to them. Roy, like Moses, has no choice but to obey.

Again agreeing with Scott, I too enjoyed the time capsule aspect of this movie. The 1970s was the decade of three movie buffs' childhood. Seeing these old cars, televisions and rotary telephones brought back a wave of nostalgia. I remember wearing my hair long just like the Neary son. Ah, memories.

The inclusion of real life mysteries adds another layer to the story. Both the ship discovered in the Gobi Desert and the airplanes that appear in the desert in Mexico were based on real life incidents. The Cotopaxi was a tramp steamer that went down in the Bermuda Triangle in 1925, and the planes are from the lost Navy flight 19 which disappeared off the coast of Florida 20 years later.

As a kid I remember being disappointed by the ending. I wanted to board the mothership with Roy and see other planets. Now as an adult, however, I think Spielberg was wise to leave the mystery intact. After all no movie can exceed our imaginations.