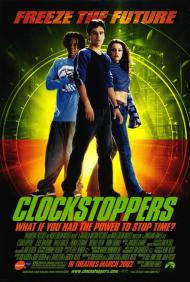 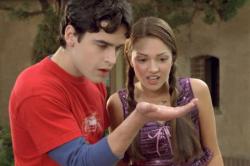 Clockstoppers is a harmless, adolescent thrill ride. It has lots of heart, but lacks completely in suspense. A well paced, family friendly movie that only the kids will like.

This is a story of a teenage boy who just wants to buy a rad car to impress the ladies. His dad is working on something scientific and has little time for his family. Junior stumbles across dad's top secret watch that he just left in an unlocked box in the basement. He soon discovers that it speeds the wearer and whomever is touching him, up to an incredible speed so it appears that everything around them is standing still, when in fact it is they who are just moving faster.

Before you can say Men in Black, some government suit wearers come looking for the watch. This is all supposed to be tense and exciting, but it never comes to pass. The main character does some fancy bike riding and his girlfriend is cute, but so what? We have some chasing, we have bad guys, but never is there any real danger for our teen hero.

The best thing this movie offers is its special effects. His girlfriend moving the water droplets from the sprinkler is impressive, but is not enough to save this ho-hum movie.

Jonathan Frakes of Star Trek: The Next Generation directs this movie. He even throws in a Star Trek reference to remind the audience that he used to be associated with more entertaining work. Perhaps he should spend more time in front of the camera instead of behind it.

The two things I came away from this movie thinking was; wow that guy looks just like Xander from Buffy: The Vampire Slayer and two, If they ever make a Green Lantern movie one of those two guys would make a great Kyle Rayner.