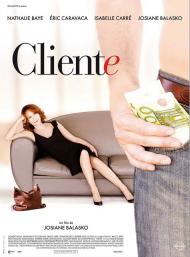 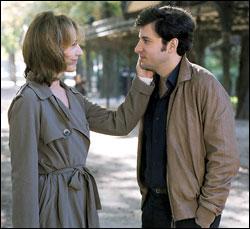 Through films like Cliente and Hors de Prix, the French seem very mature when it comes to sex.  They understand quite well the difference between making love and fornicating.   Both also share a common plot line of an older woman hiring a younger man for sexual pleasure.

The movie opens with Judith, a well-to-do 50 something, shopping network pitch woman meeting thirty yeard old Patrick in public.  They go to a hotel, have sex and she pays him his fee.  Judith narrates that she uses a male prostitute once or twice a month to have an orgasm.

Patrick is actually Marco, a house painter.  He leads a double life. Marco is Married to a hair stylist who thinks her husband's extra cash and expensive gifts come from painting work he is doing on the side.  They live with her mother and obnoxious sister.  His wife owes money on her salon, and they want to get their own place.  Marco is a gigolo out of financial necessity and not pleasure.

Judith lives in a nice Paris apartment with her near spinster sister.  Her life is very structured and stable.  Things change when her sister falls in love and Judith starts to have feelings for Marco.  At their second appointment, Marco, for what ever reason, cannot perform.  She still tries to pay him but he turns it down, endearing himself to her.   At this point he became a human to her and not a robot with an erection.  Marco meanwhile, has his own issues as his wife discovers his secret.

Cliente tells two stories, Judith's and Marco's.  Both are well told and everyone does fine acting.  I was more fascinated with Marco's though.  Shortly after his first visit with Judith he goes to pick his wife up from work.  He pulls up in an old worn out car.  This is not Richard Gere cruising a highway in a hot black sports car, while Blondie plays on the radio.  Marco is a working class stiff, who happened upon a way to help support his family.  As a guy, I could not help but like him.  Women will likely view him differently.

The movie gets more dramatic as Judith's sister moves away with her American boyfriend, leaving Judith more needy of Marco.  With his secret known to his wife, Marco's marriage is hanging by a thread, but when the bills pile up she suggests he do one last weekend trick.  This adds a whole new dimension to their marriage as well as a shit load of tension.

Cliente is a great character driven story.  Although the plot is completely unique to movies, it is all done with conviction and honesty.     Most of us will never find ourselves in these situations, but you will find yourself caught up in the emotional spiderweb this movie spins none-the-less.