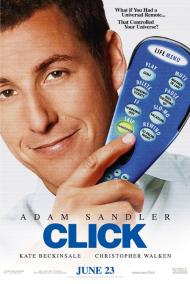 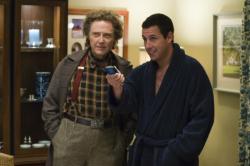 I was first introduced to Adam Sandler's comedy years ago when a friend loaned me one of his comedy cd's. It was funny but also extremely adult, profane and quite pornographic. Sandler's movie career however, has been more Frank Capra than Ron Jeremy. In Click, Sandler visits Capra land while only occasionally throwing in a dirty joke. In fact, most of the sex jokes stem from his many dogs humping a stuffed duck.

Sandler plays family man Michael. He is trying very hard to make partner in his firm. To do so he must work long hours at the office and at home. He is not actually a workaholic as those people do it because they like to. Michael is just trying to make a nice home for his family. After a stressful evening that culminates in him not knowing which remote works what, he heads out to find a universal remote to simplify his life. He gets a special one from the ever daffy looking Walken.

He soon discovers that the remote is actually a remote for his life. He can rewind to past moments in his life as well as fast forward through arguments with his wife. Much of the comedy derives from the scenes where he uses it. Michael soon becomes too dependent on it and after not getting a promotion he decides to skip to the moment of his promotion. He does not realize that it is a whole year later. The remote then starts fast forwarding on its own. Michael loses great chunks of his life as he sees his kids grow up and his marriage fall apart at small snippets at a time.

The message of Click is both simple and heavy handed,life is about the journey not the destination. Yeah, we all know that. The one thing that this movie does not say is how do you stop to smell the roses when if you do you may not get that promotion or you may even lose your job then your wife because she is mad as hell that the bills can't get paid so you end up divorced paying child support to a woman you no longer like so you can see your kids twice a month who now resent you because you didn't work hard enough to pay the bills and keep the family together. In other words, stopping to appreciate what you have in your life is important but unless you're independently wealthy, it is not very realistic. We all have to answer to our bosses and meet all kinds of financial responsibilities. I would have loved to have bought into the whole message of stopping to smell the roses as I do with It's A Wonderful Life's it's all about what you do for other people and not what you do for yourself that counts message. It sounds nice but I am not independently rich.