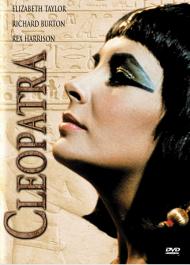 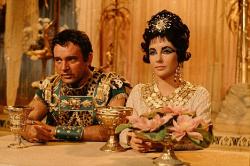 The Elizabeth Taylor version of Cleopatra is quite possibly the most extravagant spectacle Hollywood has ever produced. For one thing it nearly bankrupt 20th Century Fox and turned the retreat of the studio era into a rout. The problems during its more than two years in production are legendary, including the near fatal illness of its star. Taylor made headlines around the world when she became the first movie star in history to be paid one million dollars by a studio for a single motion picture. No expense was spared. 26,000 original costumes were made and 79 separate sets designed and built. The greatest of these was a recreation of Alexandria that remains to this day the largest set ever constructed for a movie. Has there ever been a scene more gloriously over-the-top than Cleopatra's entrance into Rome?

Unfortunately no amount of money spent on visual opulence can make up for a plot that crawls along at a tedious pace. Compared to most Historical Epics this one has relatively little action. Instead we get pages of dialogue. Sure there are a few battle scenes but the movie's heart is never in them. The focus is never allowed to be off of Cleopatra long enough for that. Taylor has the necessary charisma to play the most famous woman in history but at a rather mature 30 she is a bit too old for the role. Still she looks great in the many stunning outfits she wears and she chews up the scenery in a few scenes. My favorite line is when she tells Marc Antony to kneel before her and he refuses. She imperiously commands, "I asked it of Julius Caesar. I demand it of you!"

The movie takes place in two long acts. The first act shows Cleopatra's relationship with Caesar, how she gets pregnant and eventually arrives in Rome with her son ready to be made Queen. Of course things turn out a bit differently when Caesar is assassinated. So Cleopatra does what any good diva would under the circumstances. She falls in love with Caesar's best friend and righthand man. Act II tells of this alliance with Marc Antony that leads to both of their downfalls. Cut. Print. The End. (after 4 hours)

Rex Harrison plays Julius Caesar to the hilt. What a ham. By contrast Richard Burton is a positively subdued Marc Antony. But maybe he just didn't want to upstage the woman he had fallen in love with. The woman that he would spend the the next fifteen years having the most famous tumultuous love affair of the Twentieth Century with.

If nothing else Cleopatra provided the perfect template for how NOT to make a movie. Not that Hollywood has always heeded the example. Heaven's Gate, Ishtar and Waterworld are all latter day Cleopatra's. Still the infamy and grandeur of this early sixties behemoth has yet to be topped. 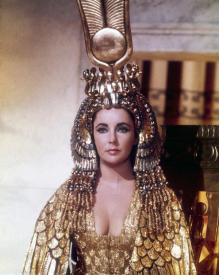 Elizabeth Taylor as the Queen of the Nile.

My interest in watching Cleopatra was based entirely on my fascination with Egyptian history. I wondered greatly how historically accurate this film was. It is high drama, but it turned out to be at least based on actual events.

To discuss this film from a historical perspective we must establish the true history. First and foremost is that Cleopatra was not Egyptian. After Alexander the Great, of Greece, conquered Egypt, one of his generals, Ptolemy, became ruler of Egypt, taking the title of King Ptolemy I Soter of Egypt. His descendants ruled Egypt for the next 300 years. In 51 B.C., one of those heirs, Ptolemy XII died, leaving the throne to his 18-year-old daughter Cleopatra VII and his 10-year-old son Ptolemy XIII. Cleopatra and Ptolemy XIII did not wish to share power. Ptolemy XIII chased Cleopatra out of Egypt and into Syria, where she built an army to challenge her brother.

Meanwhile, there was a civil war going on in Rome between Julius Caesar and Pompey, who fled to Egypt. Caesar followed him there with an armada, presenting the sibling rivals with a possible powerful ally. Ptolemy XIII made the first gesture by having Pompey killed. The film depicts him presenting Caesar with Pompey's severed head.

In 48 BC, Cleopatra returned to Egypt with a military force. She was not able to see Caesar as Ptolemy XIII would have her captured on sight. Thus was born the legendary story of her being smuggled into Caesar's chambers wrapped in a rug. The facts surrounding that event are non-existent, but she clearly made an impression on him. In 47 B.C. Cleopatra gave birth to Caesar's son, Caesarion. With Caesar, and his army, firmly on Cleopatra's side, she easily dethroned her brother and became the sole ruler of Egypt. Soon after being defeated in battle, Ptolemy XIII is believed to have fled and drowned in the Nile.

Caesar returned to Rome and Cleopatra soon followed him. The film depicts Cleopatra's arrival in Rome as one of the greatest entrances ever made in history. No diva before or since has made such a first impression by merely sitting on her ass. The film shows Caesar spending quality father/son time with Caesarion. In truth, Caesar never acknowledged that he was his real son.

After Caesar's assassination, Cleopatra returned to Egypt. In 41 BC, Marc Antony, embroiled in a power struggle with Octavion for Rome, sent for Cleopatra. He was in need of her financial and military support. The film shows them having met earlier in Rome, but it is believed that this meeting was the point in which they first met and began their romance.

Their love affair would eventually produce three children, who do not even get a mention in this film. Their alliance would create a navy to unsuccessfully challenge Octavions. Marc Antony and Cleopatra died as they lived, fighting for control. Marc Antony committed suicide by falling onto his sword, while Cleopatra let a snake bite her and died on August 12, 30 BC.

Patrick noted that Elizabeth Taylor was a bit too old for the part. At 30 she was age appropriate for the later scenes but not the earlier ones. She was likewise a tad over weight as displayed by her abundant cleavage. Her glowing white orbs seem more appropriate for a northern middle aged woman than a girl from such a warm climate.

As poorly cast as Elizabeth Taylor was, she is hardly the film's biggest flaw. At four hours, this film is more bloated than Elizabeth Taylor after a Thanksgiving dinner. As Patrick wrote, there is far too much yakking and far too little action. This film does not know when to end.

Cleopatra had one of the most amazing lives of any woman in history. It is unfortunate that this movie was not able to properly tell her story.