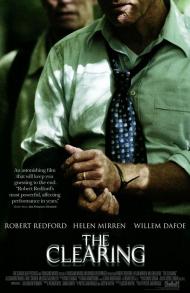 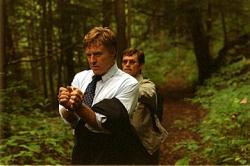 Robert Redford and Willem Dafoe in The Clearing.

The Clearing is a simple little psychological drama/thriller with a veteran starring cast. Robert Redford is wealthy executive Wayne Hayes. He and his wife of thirty years Eileen (Helen Mirren) seem to have drifted apart. They go through the motions of their everyday lives without much joy. When Wayne gets kidnapped by a disgruntled former employee (Willem Dafoe) from the driveway of their suburban Pittsburgh estate it forces the buried conflicts of their relationship - as well as that of their two grown children - to the surface.

The movie tells two stories. One is how Eileen and her family deal with the situation and having their lives invaded by the FBI agents searching for Wayne. The other shows Wayne being forced to march through some woods by his kidnapper Arnold. One interesting aspect of the movie is that while Eileen's story covers about two weeks time the scenes with Wayne and Arnold all take place in one day.

The acting is first rate. Robert Redford has rarely been given his due as an actor. Now that his looks have faded perhaps he will finally be recognized as more than just a pretty face. His performance here is compelling and 100% believable. He can take straightforward dialogue and give it just the right finely nuanced inflection so that it doesn't seem like acting at all. Helen Mirren has a strong presence onscreen but in a subtle almost covert manner. She commands your attention but you are not quite sure how she does it. She is especially good in the scenes where she must deliver the ransom money. Willem Dafoe, for his part, is playing another of his vaguely sinister roles. This is one he could probably do in his sleep. And to be honest he seems less involved that either Redford or Mirren. Still he is able to conjure a real sense of danger that is absolutely necessary for the movie to come off.

As entertainment The Clearing is a bit methodical, as a character study it shines.

Mirren contemplates whether or not to save Redford.

The Clearing is the biggest mess of a movie I have seen in a very long time, and I recently saw Disaster Movie. I had very little expectation for Disaster Movie, but The Clearing has two amazing leads that have both mastered the art of downplaying. The way Redford and Mirren look at each other says far more than any of the phoney dialogue their forced to say. “Do you love me?” “Yes.” “Then I have everything I need.”

Redford gets abducted and forced to walk through some woods. It takes him far too long to start asking what it is all about. When they do start talking it becomes worthless exposition of the abductors inner conflicts. In short, he hates his life and envies Redford’s. Twice, Redford could have gotten away from Defoe. Once, all he had to do was stay hidden and once he could have killed him. For some reason he does neither.

As Patrick wrote, the spark has gone out of Wayne and Eileen’s marriage. This is a couple that is merely going through the motions. At the end of the movie, Mirren risks her life delivering the ransom, because she supposedly still loves her husband. There is one single flashback of a scene that shows Redford and Mirren happy together. It is not enough to convince me they still give a damn about each other.

The only person I liked, or at least related to, was their grown son, Tim. He is married with a baby. He complains that they will not likely have any more children because the baby always sleeps with them. He is just starting out in a marriage. He has tons of problems ahead of him to over come. Wayne and Eileen are nearing retirement age. They have a huge home with a maid. Eileen seems to spend all of her time swimming and shopping. Although the movie ends with the afore mentioned lines, I never once felt these two actually loved each other, and if they do not care, why should the audience?