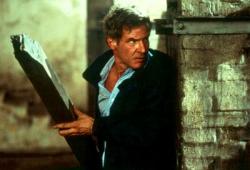 Clear and Present Danger was the second and last Jack Ryan film from star Harrison Ford and director Phillip Noyce. As you'd expect from a story by Tom Clancy, it's very much a "guy" movie, with politics and the military playing a big part of the proceedings and with only a couple of supporting female speaking parts.

It's a fairly tense thriller, despite a 2 and a quarter running time. With its large cast of characters and political intriguing, it's a much less personal story than Patriot Games, which was essentially just a simple revenge tale with Jack Ryan trying to protect his family. You'll need to pay more attention to follow the story this time and Ryan is part of a larger cast of characters.

Much of the tension takes place in the corridors of power in Washington. When Admiral Greer (James Earl Jones), Ryan's mentor is diagnosed with cancer, Ryan is promoted to temporarily take his place. His first crisis is to deal with the murder of a rich American family onboard their yacht by drug dealers from Colombia. The matter is further complicated when it is revealed that the family was close friends with the President of the United States and also may have been partners with the drug dealers who murdered them.

The scenes in D.C. are some of the best. Jack starts off at his job very naive and wide-eyed, even described as a boy scout by the more experienced Ritter. He's impressed when the President takes his advice. As the story moves along he begins to learn how to play the game, all leading up to his final confrontation with the President.

While the backbiting and infighting is taking place in the US, the more traditional fighting takes place in Colombia where the President and his Secretary of Defense have inserted a small military unit to turn the War on Drugs into a literal one. This highly trained unit is soon blowing up drug labs and taking out drug lords with all the high-tech weaponry you'd expect from Tom Clancy. They're controlled by Clancy's other literary creation, John Clark, played by Willem Dafoe.

Until the climax, Ryan's involvement in the action is mostly limited to tangling with politicians, including a good—if dated—scene where Ryan and Ritter (his nemesis at the CIA) race for information on their computers while Ryan tries to distract Ritter with small talk. However, when Ryan is sent to Colombia to verify some details he is involved in the film's most exciting sequence when his motorcade is ambushed. Reportedly, the real CIA and Secret Service were so impressed with the scene that they now use it as a training film.

Ford does another decent job in the part of Jack Ryan, but character development isn't one of this movie's priorities. There isn't a lot of room for dramatic stretching and I wonder if this, more than anything else, is why he never returned for a third installment. He does get a few scenes with Dafoe and the two seem to share a spark, but their time together is limited. His strongest acting moment comes at the end when he faces off with the President and gets to utter the movie's most famous line (which will make sense if you watch it) when he declares, "Sorry Mr. President. I don't dance."

Despite being the most successful of all the Jack Ryan movies to date, taking in over a then very respectful $120 million, it would be 8 years before the character would return to the screen with Ben Affleck in the part. There's been rumors of another attempted reboot of the series, this time with Chris Pine as Jack. I'll see it if they actually make it of course, but I doubt it will live up to this movie or Patriot Games. 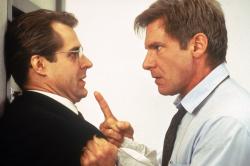 Clear and Present Danger touches lightly on a subject often considered one of our governments dirty little secrets.  Look on line and you will find all kinds of articles attaching the CIA and The U.S. government to drug cartels and drug trafficking.  These stories go as far back as the Vietnam war and as recent as the current administrations guns to Mexican cartels known as "Fast and Furious."  Early on at a meeting someone tells Jack that he is suggesting that the killing on the yacht was a hit on a respectable business man.  Jack comes back with, "You're assuming he is respectable."   A bit later, the President asks Jack to get them the 650 million dollars in off shore accounts that the "respectable" businessman was laundering.

At one point Jack goes before a committee and asks for funds.  He assures them it will not be used for military action.  Unknown to him, that is exactly what it is to be used for.  Much of the suggestions behind the connection between the CIA and drug dealings is that it generates unaccounted for money that can be used for black ops.  This way, no one ever has to go to any committee and ask for or acknowledge what the money is to be used for.  Clear and Present Danger directly supports the theories that deals between the U.S. government and drug cartels are very real.

There is much tension to be found here, whether in the halls of The White House or the jungles of Colombia.  It is topical as well as intriguing.  Although it has a lengthy running time it never loses it's steady pacing.  Noyce directs this film from a broad perspective.  He includes characters whose parts could have easily been trimmed.  Their roles give the film a more solid foundation but they add screen time.  As Scott wrote, pay attention to the details.  Noyce covers all his bases, making Clear and Present Danger a solid political thriller.

Harrison Ford is once again terrific as Jack Ryan, although as noted above, this is more of an ensemble piece than Patriot Games had been. This one covers a lot of ground and has ramifications that reach all the way to the Oval Office. It's not surprising the CIA has had clandestine financial relations with drug cartels but it is somewhat surprising that a mainstream Hollywood movie would so brazenly depict these backroom deals. What keeps it from being propaganda is the fact that the system itself isn't under attack, just certain corrupt individuals in the system. Jack Ryan, of course, represents all that is good and noble about America.

The Colombian drug lord living in a palatial jungle compound has become a movie cliche but never was it better represented than by Miguel Sandoval as Ernesto Escobedo. He was based on real life drug lord Pablo Escobar who just happened to die as this movie went into production. At least the filmmakers didn't have to worry about pissing him off.

The scene Scott mentioned where the CIA's motorcade is ambushed is the highlight to the action. It is very tense as Ryan's fellow agents are killed around him as he makes his desperate escape. Unfortunately this scene is never topped and it makes the remainder of the movie feel a bit anticlimactic. Ryan's dramatic confrontation with the President makes do as the real climax but it was probably more satisfying for Harrison Ford as an actor to play than it is for the audience to watch.

Clear and Present Danger is a solid political thriller but at 2 hours and 15 minutes it could have benefited from a pair of editor's scissors.