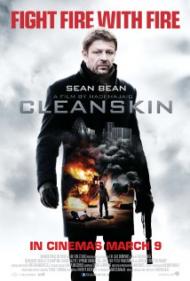 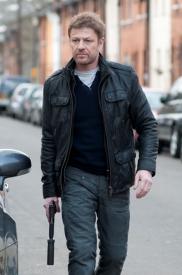 Cleanskin is a British made political action thriller with Sean Bean starring as a British undercover agent, Ewan, protecting his country from terrorists and killing whoever gets in his way. He tells his new partner. “I fought over there, to stop this from happening here…again. Didn't stop, they're not going to stop, neither will I. I'm going to find every one of them, and send them to the death they pray for.” Ewan has a serious chip on his shoulder as his wife was killed in a terrorist attack. Bean is the star and selling point but the movie belongs almost as much to Ash, a young Muslim of some unspecified Middle Eastern descent.

The movie opens with him killing and stealing explosives from a man guarded by Ewan. Although we see Ewan going about his investigation in finding Ash before he can kill again on a bigger scale, the film spends as much, or more, time getting us to know and sympathize with Ash. The movie flashes back to him in college, having political arguments in class and falling in love with girl who likes to party far more than Ash would like. We see him join a Muslim group led by an older Muslim man who tells Ash what he wants to hear.

All through Ash’s indoctrination and journey to becoming a terrorist, we are reminded how human he is. He tries to save a British woman and her baby. Ash is horrified when he is witness to the beheading of a man he helped to abduct. Although caught up in a terrorist organization, Ash still wants to be with his college girlfriend whom he reconnects with and still has feelings for. He is a man torn by ideology and morality.

That makes for a well-rounded character but the movie focuses so much on getting us to understand Ash that Ewan is left out in the cold. Although Ewan is the intended and ultimate hero of the film, he comes across almost less sympathetic than Ash. Ewan kills an innocent man in a very torturous way. The only thing we learn of his history is his wife’s death. Ash is seeking respect and a place where he belongs while he struggles with his conscience. Ewan seems simply motivated by revenge and blind patriotism. “I love my country. I'd kill for it and I'd die for it.” He proudly tells his boss, who responds, “Good for you.”

Cleanskin contains some intense moments and graphic gore. The action starts from the beginning and is never too far away. The real treat of the film is the ever present tension and the complete greyness of the characters. Hadi Hajaig wrote and directed this film. His motives are not exactly clear. Was he intending for us to like Ash? He is a terrorist but as played by Abhin Galey, comes across more as a bitter man with self-esteem issues than an all-out evil person.

Cleanskin was released on September 11, 2012 in the United States. It was a limited release and barely registered in the North American market. One can speculate why, be it the lack of publicity, the absence of an “A” list star or its politics. Those on the right could complain this movie creates sympathy for the terrorists while the people on the left may not like the message that the only way to end a conflict is through violence. Either way, I found myself caught up in the political intrigue of a film that Hollywood would have never made.