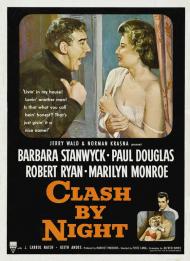 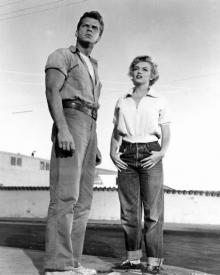 Keith Andes and Marilyn Monroe in Clash by Night

Clash by Night was made during the new wave of dramatic films coming out in the early 1950s. They featured blue collared "real" characters with personal issues, set in unremarkable places. The most notable example of these films was A Streetcar Named Desire (1951). Like that famous film, Clash by Night is also based on a play. The plot is pure soap opera, but the players are all well defined and there is some good dialogue.

Middle aged Mae Doyle returns to her family home in which her twenty something brother Joe, still lives. It is in a fishing village that she left years before with a man who turned out to be married. After living a life of questionable morality, she returns home down on her luck, or as Mae puts it, "Home is where you come when you run out of places."

She meets Jerry, who owns the fishing boat her brother works on. "I like you - you know that." Jerry tells a reluctant Mae who comes back with, "You don't know anything about me. What kind of an animal am I? Do I have fangs? Do I purr? What jungle am I from? You don't know a thing about me." Jerry sees only good in Mae. He persists and eventually they marry and have a child.

Before the marriage, Jerry introduced Mae to his best friend Earl. He is a married, woman hating drunk bigot. He eyes Mae, Joe's girlfriend Peggy and every other woman as only being good for one thing. He constantly talks about physically abusing women. He also sees right through Mae, "Don't kid me baby. I know a bottle by the label."

Mae's life seems set as wife and mother until one morning a hung over Earl tells Mae he loves her and makes a pass. She briefly plays hard to get, but once Earl starts kissing her, she responds and they start having an affair. Passions and tempers flair as Jerry learns of the affair. "You're no good. You're rotten." He tells Mae, who quietly responds, "I know Jerry. I know."

This was Monroe's first large, and least glamorous role. As Peggy, she wears blue jeans and acts more spunky than overtly sexy. She and Joe have a playful relationship that almost borders on violent. Early on he says he would beat her to keep her in line, if they were married. She tells him otherwise. Later he chokes her with a towel and she punches him. He asks her to marry him after they get into a fight. After seeing how Mae and Jerry's marriage falls apart, Joe says to Peggy, "If what you think is that Joe's alright until something better comes along, honey you better take another streetcar."

Clash by Night is dark and moody. You know it will not end well for someone. I hoped Mae and Earl would get their comeuppance, but I never really liked any of these people enough to really care. The ending is not completely satisfying but then neither is the rest of the film. Put this one down as memorable only as an early unique effort by Monroe. 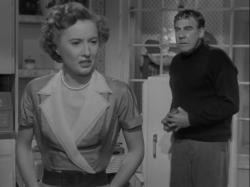 Barbara Stanwyck and Paul Douglas in Clash By Night.

Barbara Stanwyck was in her mid-40s by the time she made Clash By Night and she had been working in Hollywood for nearly 25 years. She would continue to work for another 30+ plus years, with much of her later work on television. Over her long career, she developed a reputation of generosity and kindness, making her a favorite of directors and co-stars. Monroe, on the other hand, had a career that lasted barely a dozen years and managed to develop a reputation for difficulty right from the start, including on the set of this, her first important part, when she was constantly late to set and reportedly often fluffed her lines due to nerves. And yet, it is really only because of Monroe that this kitchen sink drama is remembered today.

As Eric noted, this film came out at the time when stories with a more realistic edge were being produced. The influence of European films and the weakening of the production code were two causes for the change. Under a stricter enforcement of the Code, the ending of this film would have been much different. However, more realism doesn't always mean more entertainment and in the case of this film, it makes a duller, more depressing story.

Eric mentioned the threat of physical abuse and the film is littered with such references, making it seem as if it were quite a common thing. Monroe as Peggy tells her boyfriend Joe about a woman she works with who came in with a black eye courtesy of a domestic squabble. Her boyfriend replies, "Well he's her husband ain't he?" As if that answer alone is enough of a justification. This attitude towards women as well as Earl's racist impersonation of a Chinese man are the two most dated aspects of the film.

I agree with Eric that it's difficult to get too caught up in the film's outcome. Jerry is the most sympathetic character, but the film is so slow paced and drab that it's difficult to really root for him. And given how easily Mae cheats on him, it's debatable whether audiences should be hoping he and Mae will make up or whether he should come to his senses and let her go. Stanwyck is solid as Mae, but given her character's experience, she knows what she's doing to Jerry going into their marriage, making it difficult to feel sorry for her. Robert Ryan, as the "bad boy", lacks the needed looks or charisma to really sell his character.

Monroe's brief appearances come like a breath of fresh air. She breezes in for her few scenes and manages to deliver a quite natural performance despite, according to reports from the set, being so nervous that she vomited before each scene and broke out in blotches. She was further distracted, as was everyone else involved with the film, when her nude calendar photos surfaced and attracted a swarm of reporters.

There are some good things about this film, thanks mainly to the cast and some moody filming by director Fritz Lange, but as Eric wrote, if it weren't for Monroe, it would be just a minor footnote in Stanwyck's long career. 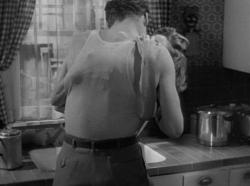 Robert Ryan and Barbara Stanwyck give in to their passion in Clash by Night.

Fritz Lang's opening sequence showing seals and sea gulls sets the scene in an atmospheric manner. Later he makes overtly symbolic use of waves crashing on rocks or shots of storm clouds gathering in the sky. The entire movie has a moody, slightly claustrophobic feel to it. Unfortunately both the direction and the acting are better than the screenplay. These characters lack depth and Odets wrote some overly flowery dialogue.

Eric mentioned Mae's quote to Jerry about which jungle she comes from. Another example happens while Mae and Earl are dancing together. Earl tells Mae that Jerry is the salt of the earth but not the right seasoning for her. She asks him what kind of seasoning she needs and he responds, “You're like me. A dash of Tabasco or the meat tastes flat.” In another scene Mae complains, “Aren't there any more comfortable men in this world? Now they're all little and nervous like sparrows or big and worried like sick bears. Men!” Who talks like that? At least in Streetcar it made sense for Blanche DuBois to speak in a flowery and poetic manner. But lines like these don't suit Mae Doyle or Earl Pfeiffer, despite the best efforts of Stanwyck and Ryan.

Some of the dialogue is humorous, like Jerry saying that Earl's in the movie business because he runs the projector at the local Bijou theater. Some of the humor is unintentional. When a bitter Earl says of his wife, “Someday I'm gonna stick her full of pins just to see if blood runs out.” Paul Douglas, as Jerry, chuckles and says to Mae, “That wife. She sure leads him a merry chase.” As if a husband speaking of stabbing his wife is all just part of the fun of marriage.

Marilyn Monroe is underused but she is good in her drunk scene. She and Keith Andes are around more for eye candy than anything else. Monroe shows off her figure and Andes spends most of the movie shirtless. Scott mentioned that the famous nude calendar shots of Monroe surfaced during the filming of this movie. Ironic when you consider that the script contains several references to some “dirty pictures” that Jerry's old uncle has on his bedroom wall.

Clash by Night is an overheated potboiler but it does contain a few good scenes like the one in the kitchen where Earl kisses Mae and she gives in to her desire and kisses back. In that moment she is willing to forget her husband and baby for the one thing Earl can give her, namely an explosive orgasm. The sexual violence in the moment is what makes this scene interesting. I like how she puts one hand inside the back of his wife beater and you can see the outline of her fingers digging into his back (see photo). The fight at the end in the projection room is also a great moment, brilliantly staged and filmed by Lang.

Clash by Night proves that a great cast and inspired direction cannot compensate for a clunky script.