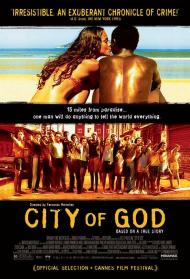 Masterfully directed with an interesting chronological looping and stylish use of split screen images, City of God is one of the year's best films. This brutally violent story is both a desperate cry for help and a searing indictment against poverty and corruption. City of God tells how the street-gang culture of guns and drugs developed in the slums of one of Brazil's largest cities. It shows how this culture perpetuates itself from generation to generation amidst the fertile ignorance of intense poverty and police corruption.

Director Fernando Meirelles displays uncanny timing in knowing just when to throw in a funny line. These moments are a brief respite from the intensely depressing world of the Rio de Janeiro slums and - just as the characters in the movie use humor to make their lives more bearable - these surprisingly witty laughs keep the audience from overdosing on the squalor and hopelessness of the world portrayed. For example when the power-crazed drug lord L'il Zé orders his minions to search through every page of newspaper to see if his name is mentioned, he asks one of the guys if he can read. Without a hint of irony, the guy replies, "yeah, but only the pictures."

Thankfully at the very center of the story there is Rocket. Rocket is a thoughtful young man who has somehow remained above the waves of violence and drugs surrounding him. He is ingenious if not completely guileless, since true innocence is a luxury not available in his world. Rocket dreams of being a photographer and of one day escaping the City of God. But getting out isn't easy.

This movie is filled with colorful characters, the majority of whom die violently before the end credits. The violence gets so extreme and is treated so nonchalantly that by the end of the movie you can feel yourself growing numb to it. And I think that is the director's intention.

The movie ends with a scene featuring a group of young boys ranging in age from maybe six to thirteen. They have just committed a brutal murder and as they march off through the streets, filled with cockiness and armed to the teeth, they excitedly discuss who they will kill next. Remove the artillery and this could be any group of young boys in any tough neighborhood around the world in any time era. But these kids aren't given to hyperbole, they are deadly serious. It is a chilling denouement to a riveting movie.

I have to mention how good the young cast is. Phellipe Haagensen who plays the much loved, beautifully spirited Bené and Alexandre Rodrigues as Rocket are the standouts but not once does even the youngest child in the movie compromise the artfully crafted realism.

Meirelles brilliantly reveals his story. Often back-pedaling to fill in details or suggesting what is to come. This allows him to cover a lot of ground, cinematically speaking, and though the movie runs over two hours in length, it plays swiftly throughout. I'm glad the Academy has recognized him with a Best Director nomination. Frankly I think he deserves to win. But either way he has received world-wide recognition and hopefully opened millions of eyes to a vast societal problem with this terrific motion picture.

Leandro Firmino as L'il Ze, the most vile character in the history of cinema.

After two hours of watching these vile people kill, torture, rape, steal and do endless amounts of drugs, I felt as if I needed a shower to wash away the despair dripping from every pore of these ignorant people. If it sounds as if I lack pity for these people it is because I do.  Sure, it is not their fault for being born into such a poor violent place, but none make any rational decision at any point in the entire film.

These people are so removed from reality that one guy's dream is to live on a farm, smoke pot and listen to rock music with his girlfriend.  When Shaggy and his girlfriend want to leave, it is only after he is wanted in connection with the mass killing at a motel.  To leave, they try to carjack some guy at gun point.  Shaggy ends up dead as his girlfriend screams.  How am I supposed feel sorry for people who live by the gun and die by the gun?

Patrick is correct that you eventually grow numb to the killing.  Perhaps that was the directors intention.   By us growing bored with all the death, we become a citizen of the City of God.  We no longer feel at all shocked by someone being shot. There are so many killings and dead bodies everywhere that death becomes mundane and an optional escape.

Rocket is meant to be the beacon of light in this drug induced fog, but he benefits from the drug deals and crime indirectly.  He smokes dope and is given a stolen camera.  In fact, it is because he has access to Li'l Ze that he gets attention at the newspaper.  The irony being that he may have never escaped the slum without the crime and violence.  He was the biggest beneficiary of the drug trade in the slum.

City of God is one heaping pile of violent hopelessness.  It is a well made film, but not a fun one to watch.  I need to look up a Buster Keaton short to help lift my spirits. 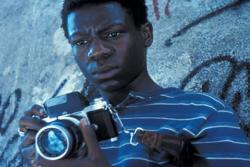 Alexandre Rodrigues in City of God.

Cecil Rhodes once said, "Remember that you are an Englishman, and have consequently won first prize in the lottery of life." Nowadays you could extend that to include all of Western Europe and North America. The characters in this film though, are among the losers of life's lottery. Not that this excuses their behavior. Lil Z would be a psychopath no matter where he was born, but he's certainly given more opportunities to exercise his killer instincts in the City of God than he would be in more civilized areas.

I agree with you Eric. This is a well made movie but I didn't enjoy it. It's a dark, violent and disturbing film that left me feeling drained by the end of it. The meager moments of humor did nothing to prevent me from overdosing on the hopelessness of this movie. Its cycle of violence that begins with the Tender Trio and then moves on to Lil Z and Carrot before ending with the gang of young boys shows no signs of being broken. It offers no hope. Rocket may escape the ghetto, but even that is not assured. If the final scene was his, it would have ended on a slightly higher note, but the filmmakers are careful to end it on the young boys and not him.

The way the story is told and edited together is one of the best things about it. Rocket's narration pauses and backs up when needed, as you mentioned Patrick. For instance, when Rocket goes to buy marijuana, the story backs up until we are caught up on the story of Blacky and Carrot. And of course the entire film is a flashback, opening as it does with the final scene and then going back to catch us up to that point.

Certainly not a movie I would ever want to sit through again, but I can at least admire the skill that went into making it.