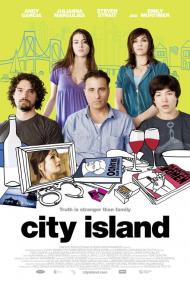 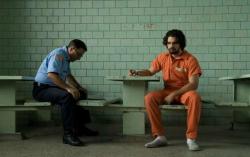 City Island is a clever little dramedy written and directed by Raymond De Felitta. It's about a working class family living on The Bronx's City Island in New York City. Many of the exterior scenes were filmed on location on this urban island. Andy Garcia plays Vince Rizzo the patriarch of a family in which each member has a secret. This deceptively simple story unfolds in quite an entertaining manner. It builds to a memorably comic finale which takes place at night on the street in front of the Rizzo house.

Vince is a security guard at a local prison. He is secretly taking acting classes at night but he's told his wife that he plays cards with his friends on these nights. He begins a platonic relationship with a fellow class member named Molly, played by Emily Mortimer – she has a secret of her own as well. Vince also discovers that his secret illegitimate child Tony (Steven Strait), is now a 24 year old inmate at the prison where he works. Without revealing his true identity to Tony, Vince takes custody of him and brings him home in the guise of a hired hand. Vince's wife Joyce, (Julianna Margulies) begins to suspect her husband of having an affair and in her anger and desperation begins to sexually pursue Tony, whom neither of them realize is her stepson.

The Rizzo children are likewise dysfunctional. 20 year old Vivian (Dominik Garcia-Lorido – Andy Garcia's real life daughter) hasn't told her parents that she has been suspended from college, lost her scholarship, had a boob job and started stripping to pay her way back into school. Their teenaged son Vinnie (Ezra Miller) meanwhile has a rather odd sexual fetish where he fantasizes about feeding overweight women. He soon has a relationship of sorts going with the morbidly obese woman next door. As the story progresses, the outsider Tony learns of each of the other family member's secrets, all of which builds to the hilarious climactic confrontation.

The cast is terrific with Andy Garcia giving the comic performance of his career. He talks with a stereotypical New York accent but his Vince is a fully rounded human being. The scene where he auditions for a role in a Martin Scorsese, Robert De Niro gangster movie is wonderful. Julianna Margulies is also superb as the loudmouthed mom. Her funniest line is when she reacts incredulously to the news that her daughter was suspended from college just for “smoking a little pot”.

City Island failed to garner much national attention when it was first released. I highly recommend it however, for anyone that enjoys a funny and smart script about a dysfunctional but lovable modern American family, that features a great cast. 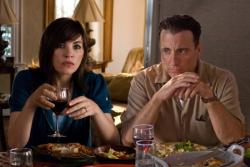 City Island has its charm.  From the very start as we see each member of the family sneak off to smoke, we know this is a family full of secrets.  Enter an outside force, Tony a walking secret himself, and the dirty laundry starts to rise to the top of the basket.  It is somewhat of a cliche.  A dysfunctional family just needs an outside presence to help fix its problems.

My favorite character, and the most unique, is that of Vince Jr, the chubby chaser.  His discovery and acceptance of his sexual preference is a fascinating as well as funny story line.  His dinner with two fat women is his fantasy come true.  My favorite lines in the movie is when he spent the night outside and his dad asks him, "Did you sleep outside last night?"  and Vince Jr. answers, "No, no, no. I did heroin with a bunch of prostitutes at the Plaza Hotel. I'm thinking of becoming a pimp."  His distracted father responds, "Good. I'll see you later."

The movie moves along very well with each family members personal issues.  All of their problems can simply be resolved by just talking about them with each other, but as is so common in families, they keep up appearances to not cause embarrassment or a lecture.  Both of which end up happening anyway in the films confrontation, that Patrick mentioned.

The film's weakest aspect, and the part that should have been trimmed, are the scenes with Molly.  Emily Mortimer is as cute and charming as they come.  However, it is time spent away from the family home.  It is there that the movie thrives and is its most entertaining.  Molly has a secret but it has little to do with the Rizzo family.  The Rizzo's interacting as they dance around their problems is the heart and joy of the film.  The final message of the movie being that with family there should be no secrets. 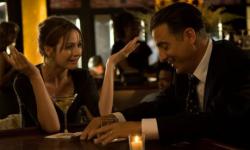 This movie has lots of charm. As Patrick said, it didn't get much attention when it was released, which is a shame because a movie with this talented of a cast and such a warm, funny script definitely deserved a wider audience. Thanks to a budget of just $6.7 million though, it did turn a profit.

Eric, I have to disagree with you on a couple of points. Molly is a very important character. The story needed someone outside the family to push Vince into doing what needed to be done. Without Molly's prodding, he may never have gone on the audition or revealed his secrets. If any story could have been cleanly removed from the plot, it would be Vince Jr.'s storyline. Vince, Joyce, Tony, Vivian and Molly's stories are all tied together, but Vince Jr.'s secret isn't connected to any of them. I also didn't find his fetish particularly funny or fascinating, although some of his sarcastic comments were worth a laugh.

Andy Garcia's performance reminded me why in the early 1990s he was tipped to be the next big thing. He's continued to work, but in a much lower key manner than his early starring roles indicated. Here he holds the movie together, providing comedy and pathos, as the family patriarch.

The supporting cast is equally good. Julianna Margulies is great as the hot tempered wife and Emily Mortimer is quite sweet as the frustrated actress with a past. Alan Arkin provides a couple of laughs as the acting teacher. Really though, there's not a bad performance in the bunch.

When it to comes to independent films, the dysfunctional family dramedy is practically a genre of its own. City Island is the best example of the type since Little Miss Sunshine.