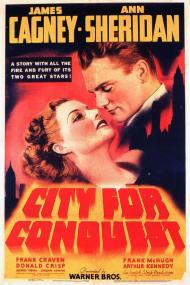 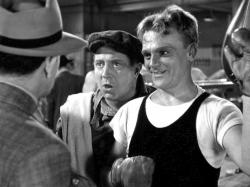 James Cagney in City for Conquest.

City for Conquest is classic Warner Bros. A gritty urban story filmed in black & white and starring James Cagney and Ann Sheridan along with many other well-known Warner faces like Frank McHugh, Donald Crisp and George Tobias. It also boasts a rare acting performance from legendary director Elia Kazan and an early screen appearance by a young Anthony Quinn. With a musical score by Max Steiner and cinematography by James Wong Howe.

The plot is simple, and like other Cagney movies it begins early in the 20th Century on Manhattan's lower east side. Here all the main characters are introduced before we quickly move ahead 15 or 20 years. Cagney plays a boxer known as Young Samson. He has a kid brother who is an aspiring composer. Ann Sheridan plays his girlfriend Peg who dreams of dancing in the big time and Donald Crisp is the big fight promoter. Anthony Quinn plays a sleazy dancer who comes between Cagney and Sheridan. The movie culminates with Cagney being blinded in the ring. This one is a highly dramatic tragedy.

The performances by the cast elevates City for Conquest above the run-of-the-mill drama that the script warrants. Everyone in it gives a first rate performance. Cagney plays one of his most sympathetic characters and he pulls off both the fight scenes and the resulting blindness convincingly. For its day the big boxing match is gruesomely shown. Cagney's face gets beat up pretty badly.

Cagney worked out hard to get in shape for this picture and it shows. At 40 this would be the last time he realistically pulled off playing a "young" man. While the script is overly dramatic and formulaic, the cast makes it much better than it deserves to be.