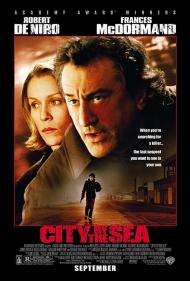 James Franco and Robert De Niro in City by the Sea.

City By The Sea is a moral lesson on the value of fatherhood. Robert De Niro stars as a NYPD LT whose estranged son, James Franco, is accused of murder. De Niro's character is torn between being a cop and being a dad.

Long Island junkie, Joey, stabs and kills a pusher in a fight over some drugs. His dad starts the investigation and soon learns that his son, whom he has not seen in years, is the lead suspect. Things get even hairier when De Niro's partner is killed and his son is also accused of that murder.

The cast in this movie is incredible. De Niro of course is brilliant. The scene near the end where he is begging his son not to kill himself is one of his best. He is also begging him to forgive him for not being the father he should have been.

Frances McDormand is great as De Niro's thankless girlfriend. She plays the conscience that his character lacks. A little more screen time and she could have a best supporting Oscar nomination.

James Franco nearly turns this movie into Rebel Without A Cause. Like James Dean in said movie, Franco is the sympathetic grown child of parents who just didn't give a damn. Both movies end inside a building surrounded by police. Sons whose parents realize far too late that they should have done something different.

One of the reasons this movie does not turn into Rebel Without A Cause is because this movie has De Niro and that movie had Jim Backus. Another reason is the direction and editing. The director blew it in the few critical scenes that De Niro and Franco share. The camera shows one actor deliver lines then shows the other's reaction. Far better would have been to show both faces on screen together and let the reactions happen as the actors speak. As is the scenes play out as if neither actor was actually on the set at the same time.

Another problem was the editing. This movie is nearly 2 hours long. So often the director lets the camera linger over the entropy of what was once a nice town. Okay, we get it. Long Beach is now a pit. It was left unattended and has now fallen into ruin. The symbolism to the father son relationship is obvious. We didn't need it thrown at us every other scene.

A better editing job could have done wonders for this movie. However, we do get to see good performances by some great actors. If only the director had been as good. 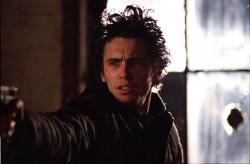 James Franco in City by the Sea.

Eric is right when he says that this movie features some good performances, but not even the great De Niro can turn this long, depressing movie into something even remotely resembling entertainment. I found none of the characters sympathetic or likable, with the exception of Frances McDormand's Michelle, and found none of them to be interesting.

Sometimes depressing and dark is good. Requiem for a Dream, for example, is a very dark and depressing movie that also features drugs and desperation in a similar locale as the one used in City by the Sea. The difference being that Requiem not only featured some great performances, it also kept your attention to the very end. City by the Sea never drew me in or made me care at all.

Of course Eric might have really summed up the problem with this movie best when he said that it is just too long. Snappier editing and a few scenes cut completely would have greatly improved the pacing. It also might have helped remove some of the depressing moments by not giving you time to dwell on things for as long.

I do wonder how residents of Long Beach, Long Island feel about how this movie portrayed their city. Especially when you consider that this movie was actually filmed in Asbury Park, NJ and not in Long Beach at all. Not a major flaw when watching the movie, but a curious point when you consider how much of a character the city plays in the movie.

Unless you are such a De Niro junkie that you must see every one of his movies, then avoid this one completely. 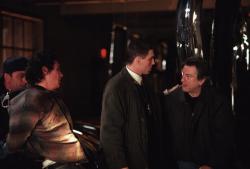 James Franco, Anson Mount, and Robert De Niro in City by the Sea.

It's interesting that both my brothers complained about the length of this movie. While I agree that it's leisurely paced, if you skip the end credits it runs only about 100 minutes. This gritty police drama is filled with cliches but also features some nice cinematography and solid acting. I can't think of anything De Niro has done in the dozen years since this movie that is anywhere near as good.

I didn't find it depressing just a bit dark. All of the characters are emotionally fucked up but I could still empathize with all of them. It's all just too predictable and by the numbers. The distant father, the bitter ex-wife, the screwed up son, the understanding but frustrated girlfriend, the frightened baby mama, the over-weight, gregarious partner, the utterly vile drug dealer. It's populated with so many stereotypes that I was surprised to learn it was based on a true story. Vincent LaMarca was a real life former NYPD officer.

James Franco gives a solid turn as the junkie son, although his Long Island accent comes and goes. The climactic scene between him and De Niro is the best in the entire movie. I do see Eric's point about the direction. The two actors rarely share the screen. But the dialogue in this scene is spot on between this estranged father and son. His face sick with regret,Vincent pleads with his boy, “How'd we get this way son? I remember the day you were born.” Joey's response drips with rancor, “Yeah? Well, I remember the day you left. So we're even.”

After so much melodrama and family dysfunction the story ends on a positive note with Grandpa Vincent and his toddler grandson on the beach in Florida. It was the setting of Joey's one happy childhood memory; a family vacation in Key West. It represents his lost innocence, and freedom from the drugs he uses to anesthetize his deep emotional pain. Not surprisingly, the real Vincent LeMarca moved to Florida after retiring from the NYPD.

City by the Sea is a run of the mill cop drama with stellar acting that almost overcomes the formulaic script.