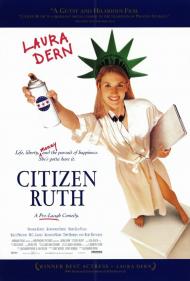 Citizen Ruth was the debut feature by filmmaker Alexander Payne (Election, About Schmidt, Sideways, The Descendants). It tells the story of a young drug addicted woman who finds herself smack in the middle of the abortion debate. Citizen Ruth caustically satirizes both sides of the abortion rights issue.

Ruth is superbly portrayed by Laura Dern. She is a woman with no redeeming qualities at all. She gave birth to four children that were taken away from her by the courts, she is constantly in and out of jail due to her substance abuse problem, and she sleeps around with anyone willing to give her money for drugs. Yet despite all of this, and thanks in large part to Dern's acting, by the end of the movie you just might feel some compassion for this infuriating woman.

The screenplay makes fun of both sides of the debate. When Ruth is arrested for public intoxication after huffing patio sealant (huffing is where you spray the contents into a paper bag which you then inhale to get a cheap, short lasting high) it is discovered that she is pregnant again. She faces felony child endangerment charges. The script points out the hypocrisy of the fact that Ruth can go to jail for harming her fetus but she has the perfect legal right to kill it.

Ruth gets taken into the home of a staunchly pro-life family. The husband is the head of the local "Babysavers" group.  Eventually Ruth winds up on the other side of the debate at a country house owned by a pro-choice lesbian (hilariously portrayed by Swoosie Kurtz) who was living undercover on the other side.

As the debate rages, Ruth's case gains national attention with both sides offering her money if she will/won't have the abortion. Members on both sides of the issue sing songs of protest and inspiration. The pro-lifers hold up signs, some of which say, “Mommy, where's Baby Tanya?” in reference to Ruth's unborn child.

Eventually Burt Reynolds shows up in the form of a national leader of the pro-life movement. He is smarmy and self-satisfied and has a creepy relationship with a very effeminate teenage boy who acts as his personal assistant. His equivalent on the other side of the debate is played by Tippi Hedren.

Citizen Ruth is a dark comedy. It pokes fun at the hypocrisy on both sides of the abortion debate. In truth neither side really cares about Ruth as a person, only as what she represents to their side of the argument. The ending, which I won't give away, brilliantly illustrates this fact.

The cast, besides those I've already mentioned, includes many famous faces. Laura Dern's mother Diane Ladd has a cameo as Ruth's mother that's truly hilarious, and this was the last movie appearance for Kenneth Mars. Mary Kay Place and Kurtwood Smith are both good as the pro-life couple that first take Ruth in.

But make no mistake, this movie belongs to Laura Dern. It is one of her finest performances and if the Academy held comedy in the same high regard as it does drama she would most assuredly have gotten an Oscar nomination for her troubles. But they don't and she didn't. Still Citizen Ruth is my favorite Alexander Payne movie. It remains a biting satire of an issue that continues to divide the country. 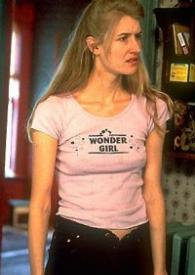 I love old pop standards and how they are frequently incorporated into contemporary films. They usually play during some sweetly sentimental part of a movie. With that said, I laughed out loud at the opening scene of Citizen Ruth, which features a filthy looking couple having unromantic sex in a very rundown apartment, as the classic “All the Way”, made famous by Frank Sinatra, plays on the soundtrack. You have to hear, or know, the song to get the joke.

Although the subject of abortion is highly inflammatory to some people, this movie treats it with dark hilarity. At a clinic, she gets a lecture from a nurse and a doctor aimed at getting her to have her baby. She listens intently before yelling back, “Are you fucking people deaf. I said I wanted an abortion!” The look on their faces is priceless disappointment. Many punch lines are simply someone’s quiet reaction to another’s line.

Although I was skeptical, I agree with Patrick that neither side of the debate comes off any better than the other. The religious pro-life family sings of God’s love in a room in their home made to look like a church, while the pro-choice lesbians sing to the moon. Both sides are represented as crazed zealots. Also as Patrick noted, both sides care more about their opinion being expressed and heard than Ruth as a person.

As this is a comedy, only extremists on both sides of the abortion issue are shown. Sure, these kind of hysterical people exist. Hell, our own mother used to protest an abortion clinic. Most people have an opinion on this subject but most of us have too much going on in our lives to have the time to protest one way or the other.

I have enjoyed her work before but never has Laura Dern been better. Ruth is at once pathetic and hopeless. Her track record is horrendous and her future bleak, at best. Watching her trying to make sense out of the war going on around her is like watching a toddler take its first steps. Ruth is slow at catching on. “I am a woman and my body belongs to me…right?” I never actually felt compassion for her but I did root for her to get all the money. She never deserved any of it but getting away with it would be a lesson to the people who gave it to her.

Although it wimps out at the end, Citizen Ruth is a bold film. Never has such a dark subject been treated so humorously honest. It will likely not change any minds but there is a great chance it will make you laugh. 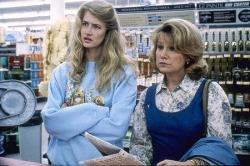 Abortion is a subject that almost everyone has an opinion on, but few of us do much about it. Moderates aren't as funny as extremists though, which is why, as Eric said, Payne keeps the focus on those who hold very strong opinions on both sides of the debate and he skewers them mercilessly. And although the specific characters and situations are fictional, the script was based on the true story of a woman who was offered money by both sides if she would either complete or abort her pregnancy.

Although the script mostly refuses to take sides, the mere fact that it takes on such an inflammatory subject is pretty amazing. When Payne and co-writer Jim Taylor were shopping the script around, several studios, while noting they thought it funny and well written, passed on it because of the topic. It wasn't until Laura Dern came across a copy and got behind it that Miramax came on board and even allowed the neophyte director to helm his own project. Payne has said that he believes it was only because of the film's limited release, in strategic markets, that it sparked relatively little outrage.

I agree with both my brothers that Dern delivers a great performance. Ruth is a horrible person and one of the most frustrating characters ever filmed. She has zero redeeming features; using and stealing from anyone who tries to help her, even punching a small child at one point. The script and Dern both deserve credit for not trying to give her a happy ending or suddenly having her change for the better. It's down to Dern that while Ruth is someone you would never want to spend time with, you keep watching to see what happens to her. Like Eric, I don't think compassion is the right word for what I felt for her, but also like him, I had little sympathy for those attempting to use her for their own gain either. While I agree with Patrick that her performance was worthy of being nominated for an Oscar, it's ironic that he calls out the Academy for their habit of not nominating comedies often enough (something that is normally true), when that same year it was Frances McDormand who won the Best Actress Oscar for the darkly comic Fargo.

The real strength of the script is that even though it shows these characters as extremists, it also keeps them real. Only Burt Reynolds, with his creepy adolescent assistant, feels truly over the top. Characters on both sides of the debate are allowed moments of sympathy. The other strength is its sharp wit. From that opening sex scene Eric mentioned, right through to the final audio joke during the end credits, the laughs rarely stop.

Expecting an answer to the abortion debate from a movie would be foolish and the script never attempts to offer one. Instead, it happily pokes fun at all involved, while possibly making you think at the same time. And for a movie that's quite an accomplishment.