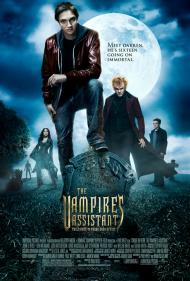 Chris Massoglia and Josh Hutcherson get an invitation they cannot refuse in Cirque du Freak: The Vampire's Assistant

Cirque du Freak: The Vampire's Assistant is the first three books in the series The Saga of Darren Shan, written by Darren O'Shaughnessy. This young adult story has a bearable enough story, even if it is nearly entirely unoriginal and is yet another butchering of vampire lore.

Darren Shan is just your average middle class high schooler.  Very little happens to him in school.  He is not a jock nor does he have a girlfriend.  His only concern and source of stress is his parents.   At one point his dad lays out his priorities for him.  "College! Job! Family! And one day, if you're really lucky, you'll be standing here yelling at a teenager of your own."

Darren's best friend is Steve, who seems to be the only student with real issues.  He comes from a single parent home and tends to lead Darren astray when he can.  If you are not clear that Steve is the school delinquent, just note that all the kids wear pastels, usually solid colored shirts, while Steve wears dark colored clothes and plaid, a sure sign that he is trouble waiting to happen.

One day, a flyer advertising a Freak Show gets mysteriously dropped from a passing car that Steve and Darren find.   Steve talks Darren into sneaking out to attend the show.  The freaks are as much an assortment of classic monsters as they are played by "B" actors.  When Larten comes on stage he says, "Thank you ladies and gentlemen. I am so excited to be here in an anonymous small town that used to have character but is now just a bland suburb filled with chain stores and surrounded by slums."

After the show ends in chaos, Darren finds himself in Larten's dressing room, where he learns many things.  First is that Larten is a vampire.  Willem Defoe pays Larten a visit, where Darren learns of a war close to starting between good and bad vampires, like in the Twilight books.  He also discovers that Steve is very unhappy and wants to be turned into a vampire.  Steve gets bit by Larten's spider and ends up in the hospital at death's door.  Just as Anakin struck a deal with Palpatine to save Padme, Darren makes a deal with Larten that if he saves Steve, he will become Larten's vampire assistant.

The deal is struck and Steve is saved.  However, Steve is not grateful so much as he is jealous.  He wanted to become a vampire so he turns to the dark side, where he becomes an evil vampire.  The two former best friends are now enemies with each possessing new powers.

Although that may sound mildly interesting, the entire film has a warn out feel to it.  How many times have we seen a film where an older, wiser mentor trains a brass young hard head?  Off the top of my head there is Star Wars, Highlander and Eragon, and that was not even considering all the many buddy cop films.

The plot is not the films only problem.  This story (like Twilight) softens and tries to humanize vampires and their abilities.   The movie has one line that acknowledges it.  Right after becoming a vampire, Darren asks, "So do I turn into a bat?"  Larten yells back, "NO. That is Bullshit."

Another problem is the casting.  Chris Massoglia is completely forgettable in the lead.  If Hutcherson were taller, it should have gone to him.   His height, 5' 7", may keep him from leading man status, but it will keep him playing high schoolers for years to come.  The worst bit of casting is that of John C. Reilly as the bad ass vampire that kicks ass and is boinking Salma Hayek.  Reilly is a good actor but who in the hell thought to cast him as the hero in an action film?  Because of his past roles, I could never take him seriously.

This is a mildly entertaining film but Darren O'Shaughnessy should not expect to attend anymore film premieres based on his work any time soon.