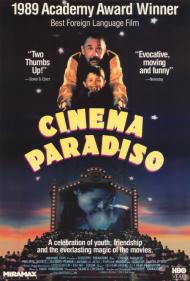 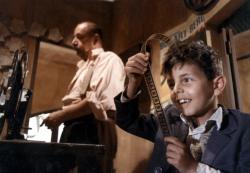 A film to help us appreciate the joy of life.

Cinema Paradiso is a very personal film to me. I lived for two years in a small Italian town that had a lone theatre, much like in this movie. The small Italian town in this film, and the one I lived in, appear to be so old fashioned. The movie theatres must have been magical places at one time as it may have been the one and only window these small town people had to the outside world. This movie also appeals to me in that it is about the love of movies and the emotions they allow us to show.

Cinema Paradiso tells the story of a young fatherless Italian boy who falls in love with movies and befriends the old projectionist of the one theatre. The projectionist becomes his unofficial surrogate father. So conservative is this village, the projectionist must edit out all kissing scenes prior to it being shown to the public.

The boy grows up under the guidance of the old man, quoting movie dialogue along the way. He falls in love with a girl who will not defy her family to be with him. He joins the army and eventually moves away. The projectionist tells him to never look back.

The film is told in flashback. The boy, now grown and living in Rome returns for the projectionist's funeral. He revisits his childhood and, of course, the old movie theatre. He is even given a roll of film by the projectionist's widow. Back in Rome, he watches the film. It is all of the kissing and make out scenes the projectionist had edited out over the years. The symbolism is over powering. His life since leaving his small town has been with out real love. His mother complains to him that a different woman answers whenever she calls him. Watching the reedited reel of film is like having a torrent of joyous emotion poured into him.

This movie represents what the magic of the movies is all about. The greatest gift a movie gives is an emotional response. They can make us laugh or cry. This rare film makes us appreciate life and all of the joy of love. Cinema Paradiso is a bit slow at times, but the payoff is rare and wonderful. 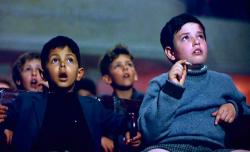 Salvatore discovers the magic of the movies in Cinema Paradiso.

Can it really be 22 years since you and I saw this movie in a theater together Eric? The years have certainly flown by. Watching Cinema Paridiso now, for the first time since 1990, I felt a bit like Salvatore returning to the village he grew up in after a 30 year absence. This movie lays on the sentiment pretty thickly but I'm a sucker for it when it's done with such sincerity, and it really is a glorious paean to The Movies.

When the story begins Salvatore is now a famous movie director. His current girlfriend tells him that while he was out his mother called to tell him that someone named Alfredo died. This information, like Proust's madeleine, triggers a night spent in remembrance of things past.

The two different actors that play the young Salvatore are both quite good but it is the younger boy that steals the movie. He is a smart little rascal badly in need of a male role model and something on which to focus his robust energy. He worms his way into Alfredo's life inside the movie theater projection room and, as Eric wrote, they form a father/son bond that is very touching to behold. The old man affectionately dubs Salvatore “Toto” and the nickname sticks. Soon everyone in the village is calling him by Dorothy's famous dog's name.

Although Alfredo is gruff and later pushes Toto away, his love for the boy is never in doubt. Their bond grows even closer when Toto pulls Alfredo to safety from a fire in the projection room. This mishap costs Alfredo his sight and so the young boy takes over the older man's responsibilities at the titular movie theater. Later, when Toto has had his heart broken, it is Alfredo that advises him to venture out into the big world and never to return.

As Eric mentioned, Alfredo is forced to edit every kissing scene, and anything else the local priest finds objectionable, from the prints he screens. This sets the stage for the very touching final scene. Cinema Paradiso tells a gently nostalgic story and is a wonderful homage to film. To paraphrase Norma Desmond, it's a celluloid gift to all of us wonderful people out here in the dark.

I agree that Salvatore Cascio as the young Salvatore is a scene stealer. His scenes are the most lighthearted and purely entertaining. His enthusiasm and smile are infectious. It's no wonder that Alfredo is unable to resist him. As Toto grows up the story becomes more serious, as it does for all of us. The film is still a great one, but it loses the unbridled sense of joy of these early scenes and doesn't regain it until the final moment when Toto views the assembled "kiss" reel that Alfredo so lovingly reconstructed for him.

The bittersweet feeling of the later scenes is amplified in the director's cut, which I watched for the first time. Although normally the director's cut comes after the theatrical version, with Cinema Paradiso it was the other way around. It was first released with nearly a 3 hour running time, but flopped with critics and audiences alike. The distributor then trimmed it down to just over 2 hours and it went on to great renown and Oscar glory. Director Tornatore was reportedly never happy with the edited version and so took the opportunity to release the original version on DVD. For once however, I think it was the studio that got it right and the director who got it wrong.

In the director's version we learn what really happened on that final fateful day between Toto and Elena and what Alfredo had to do with the circumstances and the outcome. It also includes a reunion between an older Toto and Elena. It alters not only the story, but also the emotional ending. As Eric wrote, the symbolism of watching those excised loves scenes is obviously connected to Toto's own lack of love, but it has an added significance when you realize that it was Alfredo who was responsible for that lack of love. He not only cut the love from the films, but also from Toto himself, only restoring that love at the film's end.

A big problem with this longer version is that it not only gives a twist to the relationship between Toto and Alfredo, but it also spends too much time away from it. The longer version focuses more on Toto's relationship with Elena, when the film's strongest relationship is between Toto and the man who became a father to him. It is the love between these two men and the love of films that they share that makes this such a joyful movie. The director's cut, while interesting, undercuts itself. Given the choice, I will always watch the shorter version if I watch this film again.

Giuseppe Tornatore has said that part of his motivation in making this film was to celebrate the cinema, which he saw as on its last legs. He saw the rise of home video as a signal that the theatrical experience was dying. Thankfully, 23 years later, with more ways of watching movies available to us than ever before, he is still wrong. Despite the changes in technology, no hand-held device or living room appropriate size screen has yet replaced the experience of going to the movies, which is why this movie remains as relevant today as it was when it was released.