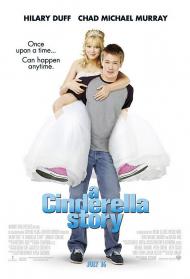 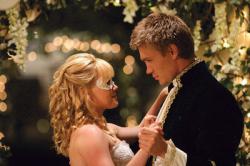 Take cute young female star, add an attractive b-list boy, mix with a dash of a classic tale, sprinkle heavily with sitcom situations, and then throw in virtually every high-school movie cliché you can possibly imagine -- from the heroine's geeky best friend to the bitchy but beautiful cheerleaders -- and you'd end up with something pretty bland, inoffensive, and completely forgettable. You would, of course, have to name it A Cinderella Story.

Hilary Duff, currently so popular with the pre-teen set right now, plays Samantha, a high school girl who lives with her wicked stepmother and two annoying stepsisters. Her stepmother (the always funny Jennifer Coolidge) keeps Sam busy by using her as her personal servant, and by making her work at the family owned diner. At school, despite the fact that she's obviously one of the cutest girls there, Sam has only one friend, the prerequisite geeky male friend.

The few moments of happiness that Sam derives come from her online boyfriend, whom she's never met. When her mystery guy makes arrangements to meet her at the Halloween homecoming party, Sam shows up in a Cinderella inspired dress and mask. Waiting for her -- dressed as Prince Charming of course -- is the football captain/president of the student body Austin Ames. They share a dance and a few moments before Sam has to leave so that she can be back at the diner before midnight so that her stepmother won't know she's been gone. While running for the door, she drops, not a shoe, but her cell phone, and the hunt for the mysterious Cinderella is on.

This is supposed to be a comedy, but the only real laughs come from the cosmetic surgery obsessed Coolidge. Unfortunately, most of her best lines have already been shown in the previews. Some of the worst attempts at humor are generated by the slapstick antics of the stepsisters.

Duff is cute in a -- given the current fashion -- surprisingly non-anorexic way. She fits the part well enough, but then so could half-a-dozen other young actresses working today. The rest of the young cast is equally cookie cutter shaped. To be fair to the actors though, this is perhaps due more to the dull script than their talents.

This is clearly a movie that is aiming strictly for its target audience of young girls and for all I know, it might strike a chord with them. If so, they will have to be pretty forgiving. 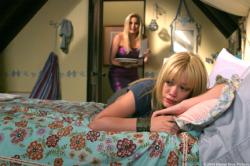 The one and only thing I got out of watching this exceedingly boring film was just how short the shelf life is for a teen queen. Who exactly is Hilary Duff anymore? Three years ago she may have been a preteen girl's idol, but today it is Miley Cyrus. Much like Duff's popularity, this movie is likewise unmemorable.

I can enjoy any kind of movie. I like action, comedies and yes, chick flicks, if they are well made. A Cinderella Story is so pathetically bad that I had a hard time staying awake through it, and I was not even tired. The inane dialogue was more tedious than a message in a fortune cookie. "Waiting for you is like waiting for rain in this drought, useless and disappointing." "Never let the fear of striking out, keep you from playing the game." "Sometimes, fantasies are better than reality."

As Scott wrote, Coolidge has the only good lines. "You're not very pretty, and you're not very bright. Oh, I'm so glad we had that talk." and "Droughts are for poor people, you think J-Lo has a brown lawn? People who use extra water have extra class." Are a couple of her best, but they are not enough to make this film worth watching, EVER! 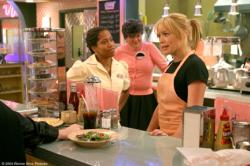 This uninspired update of the classic fairytale is inanely written, blandly acted, and predictably directed. Although, despite how relentlessly insipid it all is, if you read the user reviews posted on IMDB you will see that Scott was right when he suggested this movie might strike a chord with its target audience. Critics may have lambasted it but it has developed a nearly cult level fan base. In fact A Cinderella Story just might wind up being the movie for which Hilary Duff is best remembered.

But it is just awful. Every joke and contrived situation can be seen coming from a mile away. You can tell exactly when Fiona and her ridiculous daughters will get their comeuppance, and when Sam and Austin will finally get together. There are some unintentionally humorous moments. I found the utter earnestness with which Sam and Austin sent texts and emails back and forth to be funny. “We've been at this for five hours!” “Maybe this whole relationship is just better off in cyberspace.”

Jennifer Coolidge definitely gets the best lines. This is how she comforts Sam about not getting into Princeton (even though (shock!) she really did get in), “People go to school to get smarter, so that they can get a job. You already have a job, so it's like skipping a step.” Or when talking about Norwegian salmon, “You know it costs a fortune to fly that stuff in from Norwegia.”

Unfortunately she's just a supporting player in this theater of the blasé. The focus rarely strays from the terminally dull Duff. The only halfway witty dialogue exchange between Diner Girl and her Prince Charming is the following. Sam: “Don't you know who I am?” Austin: “Of course I do. You're Princeton Girl. You're the girl I've been waiting to meet. I know exactly who you are! What's your name?”

It has now been ten years since A Cinderella Story was released. For its two leads there hasn't exactly been a happily ever after – career wise anyway. Hilary Duff's star has long since fallen to earth and Chad Michael Murray's never really took off, but Jennifer Coolidge and Regina King are both still busy working.