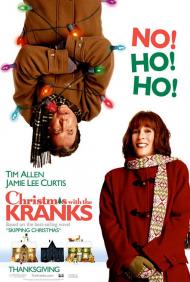 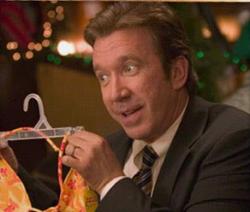 Tim Allen in Christmas with the Kranks.

Allen and Curtis play Luther and Nora Krank, a couple who's daughter has just gone to Peru with the Peace Corps, leaving the two of them childless for the holidays for the first time in 23 years. Luther hits upon the idea of skipping the normal festivities and going with his wife on a ten-day Caribbean cruise. Nora is reluctant at first, but soon warms to the idea. Their neighbors however are affronted by the Kranks' lack of holiday spirit and their refusal to participate in the neighborhood decoration contest. Eventually, as has been shown endlessly in the previews, their daughter calls them on Christmas Eve to tell them that she'll be coming home for Christmas after all, and they've got only a few hours to get the house decorated and prepare for their usual Christmas eve party.

The 'jokes' in the movie are quite pathetic and many of them are straight out slapstick, and almost all of them are telegraphed way in advance or have already been shown in the previews; Tim Allen falls off the roof, Jamie Lee Curtis goes riding on a shopping cart, Christmas Carolers slip on a frozen sidewalk. The only people in the audience that were laughing as I watched this movie were very young children. Most of the adults were either groaning or glancing at their watches.

Being that the story is based upon a successful book by John Grisham (which I've never read), I can only assume that something was lost in the translation, leaving several plot holes or at least questionable actions by the main characters. Since the idea of skipping Christmas is merely to save money, there really isn't a reason given as to why the Kranks refuse to participate in the cheap or free activities of Christmas. A major point of contention between Luther and the neighbors is that Luther won't put up his Frosty the Snowman on the roof of his house. Since Luther already owns the Frosty, it makes no since that he won't put it up now. And why he won't spend $20 on a calendar for charity, is also unexplained. Perhaps the book was trying to make a point about the commercialism of Christmas, but if there was any kind of message it's totally lost in this script by Home Alone director Chris Columbus.

The movie tries to portray Luther as the selfish bad guy for daring to celebrate or not celebrate Christmas in his own way. And yet, according to this movie, his neighbors have no real life of their own, except to pass judgment upon his. Apparently, there aren't any Jewish people living anywhere in this Chicago neighborhood either. Rather than having anyone try to show Luther the good side of Christmas, he simply has the holiday spirit rammed down his throat for showing his individuality.

I dislike certain movies that I've seen in the past, but only a few do I actually say that I hate. Christmas with the Kranks is now added to that short list. Instead of coal in the stockings of bad children this year, Santa should pass out tickets to this movie. 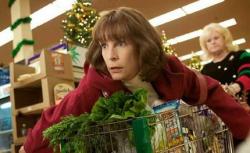 Jamie Lee Curtis in Christmas with the Kranks.

I have read John Grisham's Skipping Christmas, and yes, much is lost in translation. The novel has Luther and Nora Krank skipping Christmas to avoid all of the pressure and stress of the holidays. They agree to drop all of the holiday traditions from putting up Frosty to buying the annual police calendar. The idea is that after so many years of spending time and money on frivolous things this once they can skip it all and just have a quiet relaxing vacation. The fun in the novel is how the neighbors react to these two people, who all of a sudden, want to celebrate Christmas in their own way. It speaks volumes about how conditioned most of us are to act a certain way around the holidays, whether we realize it or not.

Christmas with the Kranks goes for laughs via slapstick comedy. Scott mentioned that it appealed to kids only. I agree. My nine year old was the only one who laughed. The pratfalls, for the most part, are not in the book.

The lesson to be learned from Skipping Christmas is that it is not about being selfish. You can go on a vacation any time during the year. The beauty of Christmas is that it unites those who celebrate it. It brings together family and friends. Too bad Christopher Columbus couldn't have kept this film above a childish level of entertainment. The book deserved better. 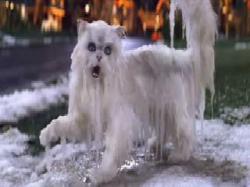 If you think a frozen cat is funny then you will probably enjoy Christmas with the Kranks.

Scott, clearly you’ve never seen Deck the Halls as that is a worse Christmas movie than this one is. Although I agree that Christmas with the Kranks is pretty god-awful. The first act of the movie is a slapstick mess with all of the Kranks’ neighbors acting like characters in a poorly written sitcom. The second act tries unsuccessfully to evoke an old-fashioned cozy Holiday mood. It even ends with Santa Claus riding off in his sleigh, which is depicted as a Beetle Bug car.

The supposedly hilarious antics are not only predictable but not even cleverly executed. And everything goes wrong in such broad unfunny ways that it gets tiresome watching after the first few minutes. It isn’t enough that Jamie Lee Curtis drops the ham and chases it across the parking lot. No, it must get run over by a semi that comes roaring by out of nowhere. Likewise Tim Allen’s attempt to put Frosty on the roof ends with Frosty smashed on the ground and Allen dangling upside down from the roof.

But perhaps the biggest sin this movie commits is the ending. After an hour of mindless antics performed by silly one-dimensional characters the movie suddenly switches to a gooey feel-good Christmas ending. Luther Krank giving his vacation to the neighbors (the wife has cancer for god’s sake) is such a blatant attempt to manipulate an emotional reaction from the audience that it is nearly a cinematic crime. I still think Deck the Halls is the worst Christmas movie I have ever suffered through, but Christmas with the Kranks is now a close second. 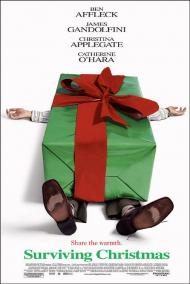 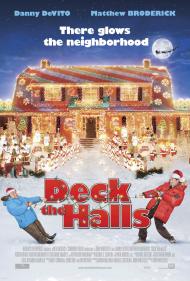