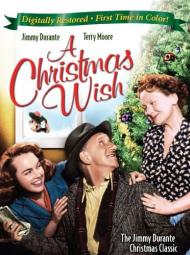 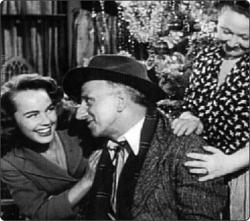 Jimmy Durante in A Christmas Wish.

A Christmas Wish is a minor little film that could have been a perennial Christmas classic had the movie set it's mind to it. The first third of the movie is all about Christmas and a wish made to sappy music. However, the last two thirds of the movie take place after Christmas.

Durante plays the husband and father of a vaudeville family down on their luck. On Christmas eve they rent a run down apartment from the landlord whose house is right up against their's. The landlord has a son who is immediately attracted to the attractive daughter. On Christmas the mother prays saying that her daughter needs new shoes. The landlord has been hiding his money, that he gets from an investment, every week behind his wall molding. A squirrel living in the rafters and behind the landlord's wall throws the money down that the landlord had hidden. The family takes the money and splurges on themselves assuming it is a gift from heaven. Every week the mother prays and the money comes down. Durante ends up investing the money in the neighborhood businesses. The lesson of the movie being that the greedy landlord hiding his money does nothing while investing money helps everyone. Or, as Durante puts it, "You cast your dough upon the water. It circulates and it comes back strawberry shortcake."

A Christmas Wish is also known as The Great Rupert. Rupert is the name of the squirrel who gives the money to the family. The squirrel is given too much screen time. The DVD commentary will give you some insight into how they got the squirrel to do things, such as pull him by a wire across a street of moving cars.

Besides Durante, the movie has the beautiful Terry Moore who was in Come Back, Little Sheba and was briefly married to Howard Hughes. Her suitor in the movie is played by Tom Drake who is best known as the boy next door that Judy Garland sings about in Meet Me in St Louis. In perhaps an in joke, Durante asks his wife at one point where their daughter is. The wife responds, "She went for a walk with the boy next door." Another in joke is when the house catches on fire and Durante tells his daughter to save the radio so he won't miss The Jimmy Durante show.

The big mistake with A Christmas Wish is that it abandons the Christmas theme so early in the movie. The movie ends with everything reconciled and a huge gift is given. To increase the Holiday spirit of the movie it should have ended at the following years Christmas. At least the movie would have been book ended by the holiday decor and thus been better suited as a Christmas movie. As it is, Durante sings Jingle Bells and the lesson is about giving, but more Christmas trimmings would have helped raise the holiday charm. 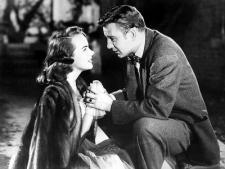 I agree that the movie should have ended the following Christmas but I still think it makes a fine Holiday classic. I disagree that the squirrel gets too much screen time. He is really not in it that much and most of his scenes are pertinent to the plot. Some of the scenes use a real squirrel but some are clearly a model squirrel using stop motion animation.

The best moment is when Durante comes home with a tiny little Christmas tree that he has bought for a dollar (40 cents of which he has paid in cash with the balance due later) only to discover that there is already a huge decorated tree in his tiny apartment. It reaches nearly to the ceiling. Durante takes one look at it, then looks at the puny tree he brought home, then pitches the small tree out the front door.

Without being preachy this movie makes a good point about capitalism. As Eric mentioned the miserly landlord hoards his money while Durante invests his (actually the same money) in local businesses. It is perhaps a bit simplistic in the fact that all of these business ventures succeed. Still the point is nonetheless a valid one.

I also enjoyed the way that the story wraps up. It is like a Christmas present. All the strings are tied neatly together and every ribbon is in place. Eric, I think you sold A Christmas Wish short. I can see myself watching it every year from now on. 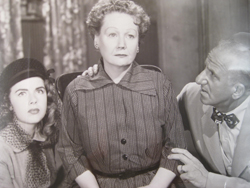 It's true that having the film end on Christmas, in the same way that it began, would have provided some symmetry to the plot. However, considering that this movie's original title was The Great Rupert and was released in the Spring of 1950, it's obvious that it was never the original producers intention that this be solely a Christmas film. It wasn't until years later that the copyright holders decided to rename it The Christmas Wish and market it for the holidays.

In any case, I thoroughly enjoyed this silly trifle of a film. Its lightweight plot is good for a few laughs and will keep a smile on your face. There's a definite old-fashioned, almost corny, feel to the story, but it's all the better for it. Eric and Patrick both pointed out a lesson or message that this movie has, but seriously, this is not a message movie at all. It's a piece of enjoyable fluff.

Durante is funny and charming in his comic manner. He was living proof that charm and charisma has very little to do with good looks. His character as the father is the focal point of the story around which all the silliness orbits. The other characters get a few laughs but this is his movie. His scenes with Frank Orth, the greedy landlord, are some of the funniest moments in the film.

And speaking of looks, just how Durante was supposed to be able to produce as beautiful a daughter as Terry Moore, I'll never know. In her final scene, she appears wearing a skintight, off the shoulder, sweater that will make you want to put a gift in her stocking. I wasn't familiar with her work before this film, but I was surprised to discover that not only is she still alive, but she's still working, with as recent a credit as October of 2012 in a low budget horror film entitled Mansion of Blood.

The squirrel is also worth a few chuckles and considering his limited screentime and the fact that the movie was named after him, I'm not sure why Eric thought he was in it too much. If I had any problem with Rupert, it was when I realized that for the stop motion they were probably using a stuffed squirrel and so basically we're watching an animated corpse. But it's best not to think of such things while watching.

It's not a perfect holiday film, but then it was never intended to be. It is however, a highly enjoyable little film that, like Patrick, I can see myself watching more than once.