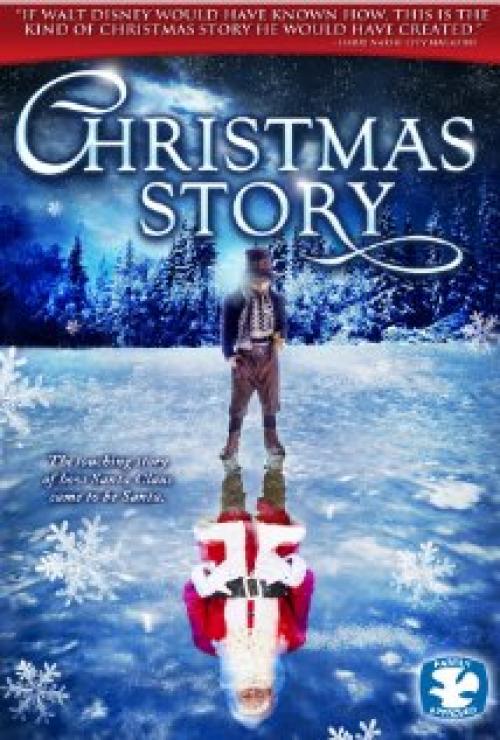 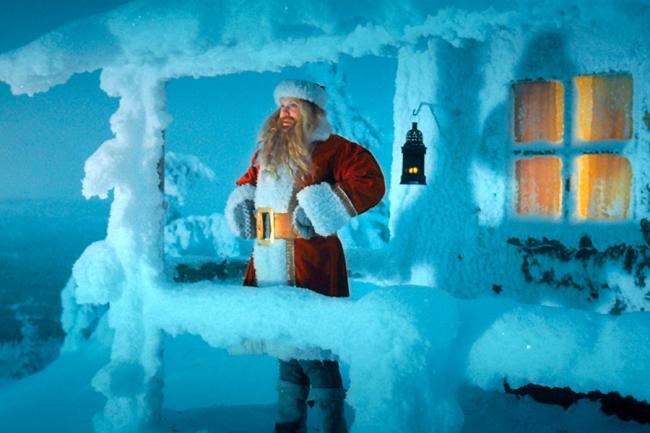 Does this guy look familiar?

Christmas Story, or as it is known in Finland, Joulutarina, tells a story of Santa Claus's origin. Actually, in Finland the man in red is called "Joulupukki" and this is his story. He is very similar to what we in North America think of him, only without the magical aspect. Instead of the North Pole, his workshop is in the mountains of Lapland. Reindeer pull his sleigh, but across the snow instead of through the sky. He wears a beard and has a red coat but is of slimmer build. His toys come through the front door and not down a chimney.

This Christmas story begins long long ago in Lapland, Finland. Many shots were filmed on location. In a tiny fishing village, a little boy named Nikolas becomes a ward of the townspeople when one late December his parents and sister fall through the ice and perish. It is Christmas and each poor family agrees to house the boy for one year. That is to say that every year on Christmas he moves into a different family's small dwelling. After each move, he leaves behind a wooden carving for the child of the homes he has stayed at as a thank you for their parent's kindness.

Upon turning thirteen he starts to live in a remote home with Iisakki, an ornery old carpenter. He keeps Nikolas locked up and treats him like slave labor in his workshop but he also teaches Nikolas to perfect his wood working skills, incorporating furniture building into his repertoire. Eventually Iisakki and Nikolas form a bond and Nikolas is allowed to keep his Christmas tradition of taking gifts to the homes of the villagers that took care of him.

Years again pass and an aged Iisakki is taken away by his estranged sons. However, he leaves Nikolas his home and secret workshop. Being a near hermit, Nikolas becomes obsessed with his holiday tradition and almost seems to become a bit off. We see him train, or try to train, some reindeer to pull his sleigh. You will recognize their names, at least in the dubbed version. Everything serves to realistically create the legend of the man small children make wishes to every Christmas.

Speaking of the dubbed version, I was constantly distracted by the spoken words not matching the movement on the actors faces. A dubbed film can make for an easier watch but this movie is so heaped in a particular culture that I would have preferred subtitles. The dubbed dialogue truly cheapens the entire feel of the film.

Everything in Christmas Story could have really happened as all of the events are based in reality. However, the actual story of Joulupukki is not so well known and not what appears in this film. He was originally a pagan figure associated with Norse mythology. He wore red and had a beard. He rode with Thor on a flying sleigh pulled by goats on a hunt to celebrate the winter solstice. When Christianity came along he was molded into the Christmas holiday. Nikolas narrates the movie and mentions near the end that children started making up stories about him and exaggerated his exploits.

Although the details of Santa Claus's existence have changed over the years, it was in Finland that he first appeared. This is a heartwarming little film but not an overly exciting one. It may come in handy if you want to show it to disbelieving children, while I found it interesting from a historical aspect.