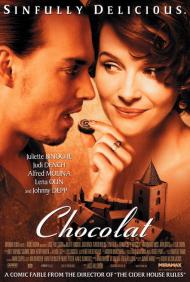 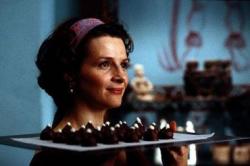 Lusciously enchanting with a near perfect blend of humor and pathos. Chocolat is an entirely satisfying movie-going experience. A simple story beautifully filmed which features one of the best ensembles in any recent movie. Juliette Binoche, Alfred Molina, Judi Dench and Johnny Depp all bring their considerable experience and talent to this story, which is matched in skill by the wonderful script and Lasse Halstrom's exquisite direction.

Set in a small village in France in the late nineteen-fifties, Chocolat tells the story of a woman and her daughter who travel from place to place making and selling the most extraordinary chocolate confections. When she decides to settle in this particular village just as their holy season of lent is beginning she offends and makes an enemy of the village mayor, a devoutly conservative and religious man. She soon has the support and affection of many of the village residents including an aging, caustic diabetic and a woman escaping an abusive husband. The dialogue is sharp and powerful; for example when the woman's husband tells her that they are still married in the sight of God, she replies 'Then he must be blind.'

Enter Roux, the riverboat gypsy who falls in love with Vianne and her magical chocolates. The romance between these two outcasts is touching and sensual. The attraction between them is immediate and completely believable.

Chocolat really tells two stories simultaneously. Vianne who is finally able to bury the ghost of her mother, symbolized by the north wind, which whenever it begins to blow signifies to her that she must move on to a new place. The other story is of the mayor Comte de Reynaud, who is brought face to face with his own hypocrisies and misplaced blame in the funniest scene in the film which I won't spoil by detailing here.

For classic movie fans there is the delight of seeing the original Gigi herself, Leslie Caron in a very rare movie appearance. Though it is a fairly small role as the widow Audel it only adds to the all around sumptuousness of Chocolat, which is as warm, rich and inviting as the hot chocolate served on-screen. 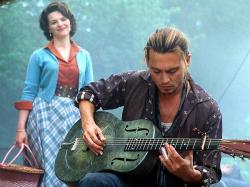 While I obviously didn't enjoy this movie as much as Patrick, I too agree that it is a good film. The acting is good, but rather subdued. No one goes over the top here, and the emotions are all held in check. The real tensions in this movie are all on the inside. The plot is simple because most of the action, except for one or two scenes, also takes place on the inside.

Chocolat begins well and it ends well, only in the middle did it start to lose me for a while.

It begins like a fairy tale. Two figures, cloaked in red, enter the town during a snowstorm, while almost everyone is church. The north wind, an important character in the movie, is blowing strongly and everyone in the church senses something is coming. It's an immediately intriguing opening, filmed beautifully.

The end, and, like Patrick, I won't reveal the details, wraps everything up very nicely without leaving that saccharine sweet feel in your mouth the way some movies do. Everything is tied up and the ending harkens back to the beginning, and makes the movie feel whole. The end made me like the rest of the movie better.

The middle portion of the movie drags in spots. With such a simple story, less, in the way of length, would have seemed to be a better solution than the more which is used here.

On a side note, Patrick may have enjoyed seeing Leslie Caron (whoever that is), but personally I enjoyed seeing Carrie-Anne Moss in something besides science fiction. In fact, so used am I to seeing her in things like The Matrix, and Red Planet, that I didn't recognize her until the very end. Sometimes the acting in Sci-Fi, is undeservedly dismissed or not taken seriously, and I was glad of the chance to see her flex her acting muscles in something which people will take a little more seriously. 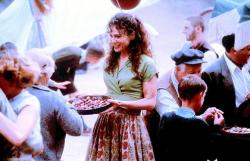 Chocolat is an annoying chick flick. You can tell a woman wrote it. The male characters are all pathetic; the conservative, controlling mayor, the abusive husband, the wandering stud. The women in this story have all the brains, and yes, all of the women are hopeless victims of some sort. blah blah blah.

Then there is the political message. According to this movie, rules and conviction are bad. Conservatives are just a bunch of tight ass, half asleep folk with no clue how to entertain themselves. Life is about passion and joy, but this movie shows religious people as only controlling, dull, half dead zombies who haven't a clue what joy is.

Like so many Hollywood movies, a liberal enters a place a conservatives and sets them all on a new enlightened path. This movie is so full of liberal preach that I thought I was stuck in a college lecture given by some former 60's radical turned professor.

The one thing I liked about this movie is Juliet Binoche. She is as charming as she is talented. A true movie star.