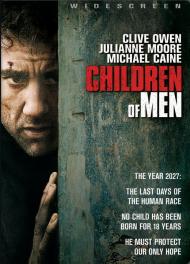 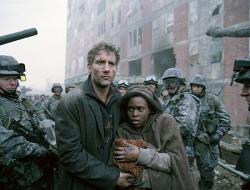 Children of Men is one of those very rare movies that actually surpasses the book upon which it is based. The book was good, but director Alfonso Cuaron, who also helped write the script, fixes some of its flaws and adds some great cinematography.

The movie is set in London in the near future. For reasons no one can figure out, women have become unable to have babies. The world has subsequently fallen into disarray. A flu pandemic and wars have ravaged the world. England has managed to survive by sealing its borders and imposing marshal law. While the book does provide more of a back story of the society that has developed because of these events, the movie offers enough of an explanation so that you understand what has happened, including some clever references in graffiti on walls and the headlines on old newspapers. When the movie opens, the lead news story of the day is that the youngest human being on the planet has died at the age of eighteen.

Clive Owen stars as Theo, a former political activist who now works at a low level job for the government. The dreary routine of his life is interrupted by the return of a former lover (Moore) who's now mixed up with a revolutionary group. They want him to use his connections to obtain travel papers for a young woman, Kee, whom they're trying to get to the coast. The woman, it turns out is pregnant.

Most of the story centers on Theo's journey with Kee. Michael Caine plays an old friend of Theo's who helps them on their journey. Caine is a scene stealer as the pot growing old hippy who's invented a strand of Marijuana that tastes like strawberries when you cough. He also provides some much needed comic relief in this dark story.

Visually, the movie is a grey drab that is both ugly and beautiful at the same time. The subject of the frame is ugly but it is shot in a beautiful manner. There are several battle scenes, one of which is one long, amazing continuous shot. Even if you aren't enamored of the storyline, you have to appreciate the look of this movie.

If I have any complaint about the movie, it is that it ends rather abruptly and with a mixed message of hope and tragedy. I just wish the story could have continued a few more minutes so that it could offer a more concrete ending as to what happens to the world.

I've always been a sucker for end of the world stories and Children of Men is a great example of the genre. 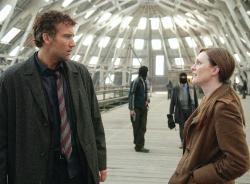 Clive Owen and Julianne Moore in Children of Men.

Scott, all liberals love end of the world movies. It gives them a chance to say, "See! You should have listened to us." Was their any other point to The Day After Tomorrow or The Core? Liberal politics inhabit Children of Men as well. Read the headlines of the newspaper that dot many walls. Many, such as "Don't Attack Iraq" have liberal messages on them. The army gathering up refugees work under the name of Homeland Security. A term very much associated with George Bush. A radio announces a song that is about to play from 2003, "When people didn't think the future was just around the corner." The DJ says. If only those folks in 2003 had listened to those environmentalist, the world would not be as polluted as it has become and people would still be having babies. No the movie never says that it was pollution, but the director chose to have pollution often seen in the background. If you're still not convinced that this movie is liberal propaganda then look no further than Michael Caine's character. How many conservative movies have a drug dealer/user as a hero?

Politics aside, Children of Men has some amazing moments in it. The most memorable scene is when the crying of a baby stops fighting soldiers in their tracks. The scene is eerie yet poetic. As good as this film is, it is still limited by its own lack of resolution. Why can't people have children? What does happen to the baby? Both questions make this otherwise very fulfilling film less than whole. What is left is a great action adventure film set in a liberal's "I told you so" future.

Can someone please point to a science fiction movie made in the last 10 years that does not have a negative liberal slant on the future. 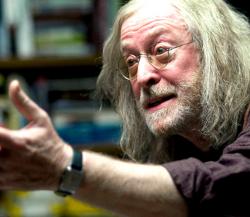 Michael Caine in Children of Men.

Politics, shmolitics, this is a great action thriller! It is original in plot, full of interesting characters and once the action starts it never lets up. In case I'm not being clear enough, I loved this movie. Very few new movies join my DVD collection. This one will.

One thing my brothers both failed to mention was the great job the cast did here. From the "names", Clive Owen (who impresses more and more with his old-style Hollywood charm and dashing good looks), Julianne Moore (in a role that contains an unexpected shock), and Michael Caine in a part unlike any I've seen him play before, to the lesser known talent like Claire-Hope Ashitey, Peter Mullan and Pam Ferris. There isn't a bad performance in the bunch.

I disagree with my brothers about the ending. It left me completely satisfied. We don't need to see the people on the ship, they are better off left to the imagination. It reminded me a bit of the ending to The African Queen. Bogie and Hepburn wind up in the water and start swimming to shore. We don't need to actually see them make it safely, that is implied. Here it is clear that Theo's mission has been successfully accomplished. That is all that matters. And I also don't think we needed to know what, exactly, caused the infertility, since the people in the movie didn't know either.

I rarely use these clichéd words, but this is an instant classic!