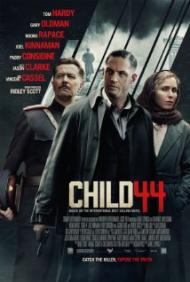 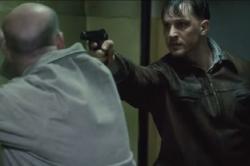 Child 44 is based on the novel "Child 44" by Tom Rob Smith, which was inspired by a real case of a serial killer in the Soviet Union in the 1970s. Smith changed the time period, killer, victims and investigation but kept one very important aspect. Because the Communist government was so desperate to sell itself as an ideal societal set up, it failed to even acknowledge that there was a serial killer. The movie repeats the line, “There are no murders in paradise.” The real serial killer was eventually caught after the fall of communism.

We first see Leo as an orphaned boy who meets and is “adopted” by a soldier. Leo grows up to fight in World War II, making friends and enemies. The main portion of the film takes place in 1953 with Leo now a married Moscow police officer. It is clear to us, though not to him, that his wife Raisa is less in love with him than he is with her. At a formal dinner, he smiles when telling of how he first met her while she looks on nervously. When having sex, she seems to count the seconds until it is over.

The mystery begins when we witness a boy, who turns out to be the son of Leo’s friend, get approached by an unidentified man at a train station. The boy’s body is later found cut up and naked. Leo is instructed to deliver the news to Alexei and his family that it was determined that the boy died from being hit by a train, even though it is clear to the family that it was murder. Leo, who has a soft spot for all things child related, orders an autopsy.

This does not sit well with his boss and Leo is given the assignment of investigating a member of a group of believed traitors. He is handed a dossier and the photo in it is of his wife. Knowing how this all works, Leo has very few options. If he determines his wife is a traitor she will be killed. If he protects her, it will look as if he is hiding something and he will be arrested, guilty by association.

During all of this, the serial killer continues to kill boys all along a railway system, including an area Leo and his wife get sentenced to live and work in. There, Leo meets General Mikhail Nesterov, who agrees to help Leo on the case. Leo is now a marked man by the government and must tread lightly everywhere he goes as some do not want the case solved as it would help show that their communism ideology has all of the same problems as capitalism.

Adding to Leo’s stress is his wife, who reveals that she never wanted to marry him in the first place. She tells him that she cried for a week after he proposed because she knew she had no other real option. In that we see the theme of the movie. Everyone, from the government officials to Leo’s wife, seems to be living a lie, pretending things are better than what they truly are. It is only when Leo and Raisa become honest with each other and begin, literally, to fight for each other that we see just how strong they need each other.

Child 44 is not for everyone. You must have some knowledge of Soviet history to understand the setting. The Russian government t would argue the opposite though as they ordered Child 44 pulled from Russian theaters just prior to its premiere, stating the movie distorted facts and contained historical inaccuracies. Such censorship will likely give it more attention in Russia than if they just let it be shown.

Child 44 runs too long and could have benefitted from a quickened pace. There are some unnecessary details that some may argue are red herrings commonly found in murder mysteries, but they just slow down a movie that too often seems to forget that there is a murder mystery. By the last quarter of the film it becomes clear that solving the murders is less about bringing someone to justice and more a means to bring this couple back together and it works as I found myself caring very much for them.

The best thing about the film is the acting. I was drawn into the story by Tom Hardy’s portrayal of Leo. He is a tough cop but also very sensitive. He becomes emotional several times during the film. Look at how he gets misty eyed when his wife tells him of her feelings toward him. Leo is not an intellectual nor is he well-spoken but Hardy brings him to life. Hardy conveys emotions with a glance or a stare. I will not give away the last scene but Hardy breaks my heart in it. Rapace, Goldman and Kinnaman deliver solid performances but it is Hardy alone that makes Child 44 work as well as it does.