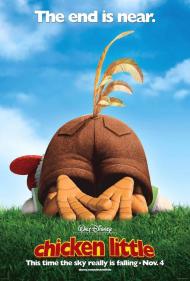 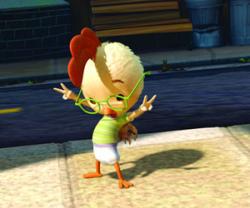 I guess everyone is at least vaguely familiar with the story of Chicken Little and his cry of "The sky is falling! The sky is falling!" And yet, despite his fame, this seems to be the first big screen adventure for the little chicken. The result is a cute and funny movie that falls short of being a hilarious classic.

The story opens with the familiar part of the story when Chicken Little alarms the residents of his small town by screaming out his famous line. When he can't produce the piece of sky that fell on him and when it becomes clear that he fell asleep under an acorn tree that is dropping its nuts, his cry is dismissed by everyone, including his father. Before you know it, Chicken Little is the laughingstock of the town.

Yearning to regain his fallen pride and prove himself to his father, Chicken tries out for the school baseball team, despite his diminutive size. To everyone's surprise, especially his father's (who used to be a star baseball player himself), Chicken manages to score the winning run in the big game and suddenly he's the hero he always dreamed he'd be. But, the night after the big game, he is alarmed to discover that another piece of sky has fallen on him and this time he realizes that it's not just a piece of sky, but actually appears to be a piece of alien technology. It's now up to him and he's misfit friends to uncover the secret of what's lurking over the town, but without making the town think that he's crazy in the process.

My brother has an oft-repeated theory that Disney has some kind of grudge against presenting a complete nuclear family onscreen. I have to admit, I'm starting to see his point. Yet again we are presented with another Disney movie with a single parent. This time it's a father and son, where usually it's the dad who is missing, but nevertheless, it's a single parent situation. And there's really no need for it here. It would have been quite as easy for Chicken to have issues with his father if his mother was still alive then with her dead. I don't know that they actually have an agenda as Eric seems to think, but it is definitely a recurring theme throughout their cartoons.

Also in the cartoon, it is subtly hinted that one of the characters, Runt, is gay, which has to be a first in a children's cartoon. It's never said out right of course, and it will go right over young children's heads, but given his choice in music, I think that is what the filmmakers are trying to imply. For instance, Runt's mother threatens to punish him by taking away his Barbra Streisand collection, to which Runt replies, "Hey, you leave Barbra out of this." And later, when he needs to be motivated, his friends tell him that he will survive, to which Runt replies by singing "I Will Survive."

Another recurring element in Disney cartoons and just cartoons in general, especially lately, is having celebrities provide the voices for the characters and Chicken Little is no exception. In fact, it goes to the extreme by having just about every voice in the film be by someone famous. This doesn't necessarily improve the film, but it does provide for a lot of, "Oh, who's that voice?" moments.

A plucky little cartoon with some funny bits and some very funny bits, Chicken Little just doesn't have the oomph to become a classic, but it's good enough so that parents who take their kids to see it won't be bored. 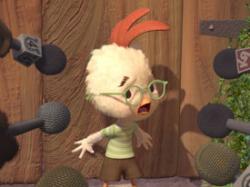 Chicken Little seems a bit stretched and it is only 86 minutes long. However, there are enough jokes to keep you interested. One of my favorites is when they are in Mutton class instead of Latin class. The teacher says a word and the class translates the word out loud into Mutton. The punch line is that no matter what word the teacher says the entire class simply says "baa." My kids didn't get it even when I tried to explain it.

Scott is assuming way to much when he suggests that Runt is gay. So what if he is a Barbra Streisand fan and knows the lyrics to every 70's disco song? Oh who am I kidding? The pig is flaming!

Yes this movie continues the Disney trend of a single parent family. I seem to think that they have an agenda because far too many of their movies have single parents in them for no apparent plot reason. Disney was one of the first major corporations to offer employees same sex partner benefits. Disney has Liberal politics and is not afraid to push their political agenda onto the public through their movies.

Chicken Little is mostly a fun movie but it pushes to hard on the father/son relationship. Chicken Little has issues with his Dad because he didn't believe him. Further more, it has Chicken Little say that his father did not support him. Since Scott started the Gay topic, I might as well continue it by writing that this scene could have easily been about a gay son wanting his father to love and support him for what he is. The issue between the father and son seemed way to serious for this kind of movie and it went way over my 9 year old's head who otherwise loved this film.