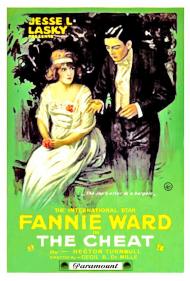 Fannie Ward and Sessue Hayakawa in The Cheat.

You are not alone if you have never heard the name Sessue Hayakawa. Even many film buffs are unfamiliar with his name, but the Japanese-American actor was a hugely popular movie star in the 1910s. His fame rivaled that of Chaplin and Fairbanks. He was a heartthrob with matinee idol looks. He specialized in roles where he held sexual dominance over women (before Rudolph Valentino). His overt sex appeal and extravagant lifestyle caused a backlash against Asian actors in Hollywood.

Soon Caucasians would be donning “yellow-face” to play Asian characters. A practice that would last into the 1960s, culminating with Mickey Rooney's cringe inducing portrayal of I.Y. Yunioshi in Breakfast At Tiffany's. Hayakawa left America for European cinema but returned later in his life. Today he is pretty much remembered for just one role. His Oscar nominated performance as Colonel Saito in The Bridge on the River Kwai in 1957, a role he would spoof the following year in the Jerry Lewis comedy The Geisha Boy. Few movie fans are aware of the fact that Sessue Hayakawa starred in more than 80 movies and was once one of the highest paid stars in Hollywood, earning an impressive $5,000 a week in 1915, the year this movie was released.

The Cheat was directed by Cecil B. DeMille the same year D.W. Griffith made The Birth of a Nation. Whereas that movie was a three hour epic, The Cheat clocks in at just one hour. It is a bedroom drama that culminates in a highly melodramatic courtroom scene. The Cheat was entered into the National Film Registry in 1993.

Originally released in 1915, it was reissued three years later. The 1918 version is the only surviving copy. The only changes that were made were the inclusion of several dates on checks and newspaper headlines identifying the year as 1918 and the nationality of the villain played by Hayakawa. Due to protests from the Japanese Association of Southern California his character was changed from Japanese to Burmese. His name in the original version had been Hishuru Tori. It was a subtle change that most Americans wouldn't have paid any attention to. Apparently there was no Burmese Association of Southern California to voice a complaint of their own.

Wealthy socialite Edith Hardy (played by Fannie Ward, herself a world famous stage actress of the day) spends money extravagantly. She gets into financial trouble when she “borrows” charity funds raised for the Red Cross to the tune of $10,000 to invest in the stock market. When she loses the money, she borrows from the wealthy and notorious Haka Arakau in exchange for her virtue. Fortunately Edith's husband Richard's speculating pays off big time and he innocently writes his wife a check for the ten grand. She explains, “I lost it playing bridge- I was afraid to tell you.”

But Haka Arakau is not to be bought off. All of which leads to the movie's most notorious scene where the sadistic Asian playboy literally brands Edith when she refuses to live up to their original agreement. I won't spoil where the story goes from here but trust me it is highly melodramatic and quite scandalous for its day.

The Cheat shows how adept at storytelling DeMille had already become. It was shot in an intimate manner with only the main characters appearing in most scenes. It tells its story quickly and concisely. It is also proof that fame is fleeting. In 1915 both Sessue Hayakawa and Fannie Ward were household names. Today they are unknown outside of the classic movie buff community. 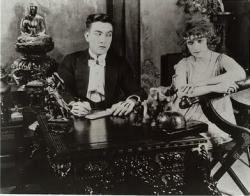 Sessue Hayakawa and Fannie Ward in The Cheat

At a one hour running time and with a plot that involves attempted rape and attempted murder, The Cheat very much resembles a one hundred year old episode of Law & Order: Special Victims Unit. Hell, as long as Law & Order has been around this could actually be one of their first shows. A story of betrayal, blackmail and sex is as old as time itself and still entertaining.

The Cheat was very much ahead of its time. Also made in 1915 was A Fool there Was where Theda Bara seduced men and destroyed them. It treated sex like a weapon that men were powerless to defend themselves from. It portrayed men as innocent victims to any woman who stirred their sexual desires. What a crock of an excuse! Today, no one would even think to accept the mere availability of a woman presenting a married man with sex as an excuse to cheat on a spouse.

The Cheat showed a situation that is far more dramatically realistic. A young wealthy man is attracted to a married woman whom he spends as much time with as he can escorting her to different social engagements acting as a companion. One day he finds himself in the position to finally have sex with her as a trade for bailing her out of trouble she foolishly put herself in. It is not an honorable thing for him to do but one that makes sense within the confines of the story.

The Cheat is horrendously racist. The fact that DeMille, who usually only employed minorities in very small roles, chose to use a Japanese actor to play a blackmailing rapist is despicable. Notice the scene where Edith announces to the court room what Arakau did to her. All of the "white' men in the room become violently mad. Would they have reacted the same way had Edith been an Asian girl? No wonder the Japanese Association of Southern California protested. Picture this film being made in the 1950s with a black actor playing Hayakawa's part.

With that said, Hayakawa does a great job in the role. As Patrick wrote, the guy had some serious charisma. He smiles and is charming. He scowls and is menacing. You can tell he likes her and is yet put out by her blatant disregard for his feelings for her. If only DeMille would have toned down that court room scene and not shown Arakau's male servants looking so much like gang members. 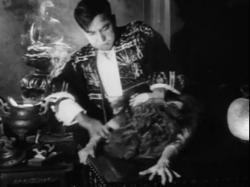 Sessue Hayakawa and Fannie Ward in The Cheat.

Compared to many other films of the period, this one comes across as rather modern, at least in some respects. It quite frankly deals with sex. The shots are set up well and the lighting is quite interesting. It's really only the performances that seem incredibly dated.

Of all the performers, Hayakawa is easily the best screen actor. Fannie Ward was a Broadway star who moved into films and she still seems to be emoting to the back row of the theater. Jack Dean, who plays her husband onscreen, and was her actual husband in real life, gives an equally overwrought performance. Hayakawa delivers the most subtle, screen friendly acting job. He manages to be sinister and smooth, without resorting to metaphorical mustache twirling.

As Eric said, the plot is one that could be used in a Law & Order episode, but it's really more of a soap opera than a criminal procedural. There's not much mystery or investigation into what happens, just the emotional aspects of the events.

Although the film clocks in at just an hour, it could still have been tightened. As is common with many of these early films, title cards and reactions take up too much time. Filmmakers and audiences of the era weren't as experienced as they are today and plot points are really pounded into your eyes to make sure you "get it". I usually find that with most silent films, particularly the pre-1920 ones, that you can watch and enjoy them better by playing them at 2x their normal speed.

The more lurid details do keep the film interesting, even if it's not always the most entertaining. A woman being branded by her rapist/lover would be scandalous today, it must have seemed even more shocking almost 100 years ago.