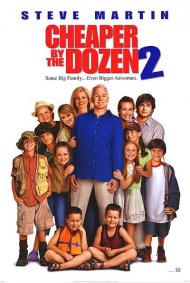 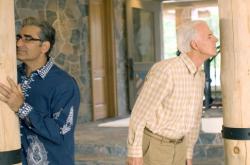 Eugene Levy and Steve Martin in Cheaper By the Dozen 2.

Cheaper by the Dozen 2 is light, harmless and predictable. Although predictable is never a good thing for a mystery or thriller, it does work for family films. You like the family members and how they interact. You know that all will be well by the end of the movie. The joy of these types of films is just that. They are comfort food. No one is threatened. Everyone's problems are simple and easily solved.

As with all children, they grow up. Tom Baker is feeling the tug of his family starting to go in all directions. His eldest daughter, Nora, is married, pregnant and about to move away with her husband. His first born son, Charlie, is working as a mechanic paying off loans. His next oldest daughter, Lorraine, has just graduated and is heading to New York to be an intern. Tom constructs one last big vacation for the whole family on a lake.

The lake they go to is now almost entirely owned by an old rival, Jimmy Murtaugh, who also has a mansion full of children. The two family's children get along very well. Charlie falls for one of the Murtaugh daughters. Sarah Baker has her first crush on Eliot Murtaugh. Eliot is played by Taylor Lautner who was last seen as Shark Boy in The Adventures of Sharkboy and Lavagirl in 3-D . The two fathers spend the entire summer competing with each other and in the process Tom ends up pushing his kids even further away.

Most jokes come from Martin's slapstick. When was it decided that it was funny to see dads get hurt. Like Dennis Quaid in the remake of Yours, Mine and Ours, Martin falls, trips and pratfalls all over the place. It is like watching America's Funniest Home Videos.

Cheaper by the Dozen 2 is not a great movie but it is a nice viewing for anyone looking for a movie to watch with their children.