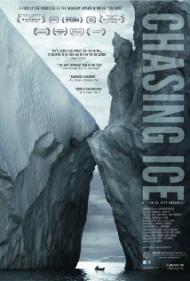 James Balog inspects one of his time lapse cameras in Chasing Ice.

Chasing Ice follows the Extreme Ice Survey as they attempt to photograph the melting of the world's glaciers over an extended period of time. Lead by the dogged James Balog these men risk their lives in extremely harsh climates and precarious situations (even rope climbing down inside some of the glacier crevices) in order to capture evidence of today's rapid climate change. Whether or not you blame the current phenomenon on man or nature there is no way any rational person can deny that our planet is getting warmer. Glaciers that have been around for hundreds of millennia are disappearing at an alarming rate. This film documents the big meltdown that is currently taking place on Planet Earth.

A few dry statistics get tossed out there (for example one glacier that is shown has retreated more miles since 2000 than it did in all of the previous century) but for the most part Chasing Ice is content to speak visually. It is proof that a picture is indeed worth a thousand words. The ice is exquisite to behold. The way it captures and reflects light. Its opaque and stunning beauty is a marvel of nature. And in some of the film's most spectacular shots huge shelves of ice, measuring several kilometers wide, break off (called calving) from the main glacier and crash and roll churning dramatically in the water. Pieces of ice as tall as the Empire State Building bob up and down.

Scientists are able to drill down to the bottom of the oldest glaciers and extract ice that dates back 800,000 years. They can then analyze the air bubbles trapped in the ice when it formed and tell what the carbon dioxide levels in the air were like at that time. About 150 years ago (right about the time the Industrial Revolution really began to accelerate) these CO2 levels began to significantly rise to rates never before found in the more than three quarters of a million years of the ice's history. The levels had fluctuated in cycles throughout that time but never anywhere near as high as the extreme levels they are currently measuring.

Chasing Ice is possible because of one man. James Balog is a man on a mission. He risks his health by going against doctor's orders and hiking around the ice. He's not a young man and his knees are in terrible shape. He's had numerous surgeries on them but his determination is stronger than his pain. The story of his personal obsession to photographically capture the ice as it melts is told simultaneously with the arc of the retreating glaciers. In fact they are the same story and Balog's passion is quite moving.

Chasing Ice is perhaps most famous for its Oscar nominated theme song. Written by J. Ralph “Before My Time” is a tender ballad sung by Scarlett Johansson (sounding suspiciously similar to co-nominee and eventual winner Adele) with accompaniment by Grammy Award winning violinist Joshua Bell. Chasing Ice is an unforgettable motion picture. Whatever your thoughts about man's contributions to climate change are you cannot deny the power of these images.

I so want to take a drink of this water!

James Balog is certainly not the first person to claim that man’s carbon footprint is causing global warming and melting the ice caps. As Patrick wrote, he has a few statistics to share where he compares the increased use of fossil fuels with glacial retreat. It is nothing new. Anyone who has suffered through an Al Gore speech or film has heard all of this before.

Chasing Ice will not change global warming skeptics. Who is to say what the proper amount of ice on this planet is? We have only had about one hundred years of accurate temperature and photographic evidence. We do not have an accurate measure of nature's temperature cycle.

The film claims that nearly all scientists know man made global warming to be true yet so much of the general public does not. I believe that much of the general public does not care. This film shows mile after mile of ice falling into the ocean yet none of that has changed anyone’s life. Balog talks about how it one day will, yet we have been hearing this stuff for years and it has begun to fall on deaf ears. Does anyone else remember Ted Danson doing a show 25 years ago about how our oceans will be dead in 10 years?

Where Chasing Ice exceeds is in the visuals. Balog is not a compelling speaker or an interesting narrator. However, he has an incredible eye for finding beauty in such a mundane object as ice. Some of the ice breaking apart is monumental. This is a film that would benefit from a large theater screen. Some of the ice and water is a brilliant shade of blue I did not even know existed. I yawned through the Al Gorish talk but marveled at the imagery presented.

Balog pads the film with issues of his sore knee and clips of his hot wife but Chasing Ice only succeeds when the ice is the focus and mother nature the star attraction.