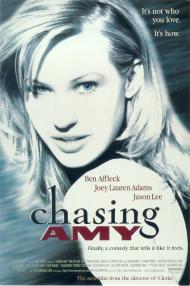 Holden draws a comic book that Banky is the inker, not the tracer.  That must be clear.  At a comic book convention, Holden meets the beautiful Alyssa, played by the incredibly adorable Joey Lauren Adams.   It is love at first sight for him, but then he discovers she is a lesbian.  However, the heart wants what the heart wants.  He confesses his feelings and she responds.

Banky does not see a future in Holden pursuing Alyssa.  Is this because he knows a man dating a lesbian does not have good odds, or is he jealous that his best friend, that he has known since school, lives and works with, is in love with someone?

The plot sounds a bit heavy and in a couple of scenes it is.  However, Kevin Smith can write dialog and Chasing Amy features some hilarious stuff.  At the convention, a black comic artist is railing against Star Wars for being racist, "...and Jedi's the most insulting installment! Because Vader's beautiful black visage is sullied when he pulls off his mask to reveal a feeble, crusty, old white man! They tryin' to tell us that deep inside we all wants to be white!"

After Holden and Alyssa have sex for the first time she waxes on poetically about how she can be attracted to him.  She says such lines as, "I'm not with you because of what family, society, life tried to instill in me from day one. The way the world is, how seldom it is that you meet that one person who just *gets* you - it's so rare..."  After her speech, Holden asks, "Well, can I at least tell people all you needed was some serious deep dicking?"

Banky tells Holden that his relationship with Alyssa, "...is all gonna end badly."  For an example, he draws Holden a picture of a hundred dollar bill and four characters around it, "Over here, we have a male-affectionate, easy to get along with, non-political agenda lesbian. Down here, we have a man-hating, angry as fuck, agenda of rage, bitter dyke. Over here, we got Santa Claus, and up here the Easter Bunny. Which one is going to get to the hundred dollar bill first?"  Holden guesses, "The man-hating dyke."  To which Banky yells, "Because the other three are figments of your fucking imagination!"

One piece of conversation had me laughing out of sheer recognition.   Jay says to Holden, "Come on, man. I know people who know people."  Holden states, "You sound like Barbra Streisand."  Jay, looking at Silent Bob sitting next to him says, "That's because I got this tubby bitch playing her "Greatest Hits" tape in my ear all the time. You gotta see him, man, when she starts singing that uh... "You Don't Bring Me Flowers", this faggot starts crying like a little girl with a scraped knee and shit. Big fucking softie."  Although I would not call Patrick a "faggot," the scene hit very close to home.

Chasing Amy explores the issue of how love and sex affects the other.  Holden and Alyssa love each other and have sex, even though she also likes sex with women.  Holden and Banky love each other but do not have sex.  The scene near the end with the proposed menage a trois, does not ring true.    It is too easy of an out to suggest that Banky is merely deep in the closet.  Nothing up to this scene ever suggests that to be the case.  Chasing Amy makes the point that the difference with love between two platonic people and the love between two sexually intimate people can be paper thin.