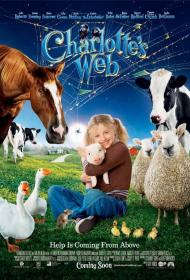 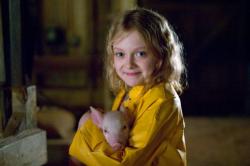 E. B. White's story of a spider who saves a pig, with words in her web, taps into the core of humanity. It is a discussion on friendship and a lesson about the cycle of life up to, and most importantly, death. It does it all with an honest and open approach.

As the movie opens a litter of pigs are born and the runt is to be killed off as he will not survive being to small to fight for a nipple to suckle on. Farm girl Fern adopts the pig, names it Wilbur, and ends up raising it on her uncle's farm. The Uncle takes the pig on with the full knowledge that it will grow and make a fine Christmas ham.

On the farm, Wilbur befriends a spider, Charlotte, who promises to save him from the dreaded smokehouse. She writes words in her web above Wilbur's pen, such as "Some pig" and "terrific". This causes a stir in the farming community and Wilbur becomes locally famous.

The barn is filled with animals voiced by famous celebrities. My youngest son thought the horse, Redford, was the funniest. I liked the sheep, led by Cleese, who always follow what everyone else does. The crows, who are scared of the scarecrow, are also good for a few laughs.

The story is even deeper in that it shows death, not as a scary thing, but as a normal event in everyone's and everything's life. So many children's movies, of late, act scared to discuss the fact that animals are eaten and death eventually comes to all. Such films as Barnyard and Home on the Range, that take place on farms, skirt the whole animals as food issue completely. Charlotte's Web approaches the subject with honest respect for it's core audience of children who fully understand that a Chicken Mcnugget does in fact come from a chicken.

Charlotte's Web is a classic story of birth, growing up, growing old and death. This movie does the story justice.