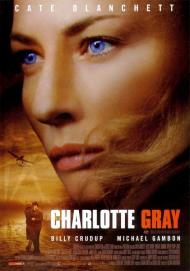 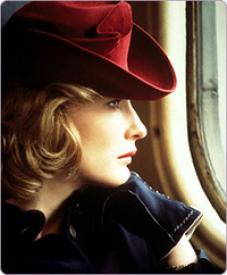 Charlotte Gray was released at the end of 2001. Cate Blanchett gives a great performance as an average woman caught up in the spy and saboteur world of World War II. The film however, got lost in theaters in the United States as another film she starred in was released the same week, The Lord of the Rings: The Fellowship of the Ring.

Charlotte is a Scottish girl living in England who happens to have spent time in France before the war and speaks fluent French. She is soon recruited for service to Queen and country. She meets and quickly beds an Royal Air Force pilot, Peter, who is fond of philosophical lines like, "Bravery, it's - accident." After Peter is shot down over France and reported alive in a safe house, Charlotte volunteers for courier duty between the British government and the French resistance. Secretly she hopes to go to France and find Peter.

After parachuting into France, Charlotte is met by Julien, played by Crudup who seems to be channeling a young Horst Buchholz. Charlotte soon learns that her job is very dangerous and that no one is to be trusted. She helps blow up some train tracks and hide out some Jewish children. She also falls for Julien as she inquires about Peter.

The movie has a great setup for action/suspense and romance. However, Armstrong never milks the movie for all it is worth. She is directing one of the most capable actresses of the decade and she misses all kinds of opportunities to take advantage of it. When Charlotte drops into a French field it simply shows her on the ground looking up. This is her first parachute drop, we should have seen her scared to death on the way down. It would have helped us to relate to her conviction. When she races to save the Jewish boys I should have felt something. As it is, it is merely a sad scene. Armstrong should have allowed Blanchett some more face time for us to see her grief and absorb the moment for what is happening.

Charlotte joins up, falls in love, parachutes in France, fights with the resistance, falls in love again, and eventually must make some tough decisions. The plot is very intriguing. Blanchett and Crudup work great together. The scenery and setting is spectacular. If only Armstrong could have allowed her characters the time to become as real as the town and surrounding countryside. Why did Charlotte join up? Why is she in love with Peter or Julien? Why is Julien and his father not close? Why did Peter wait so long to contact her? The biggest question is why did she choose the man she does? I really did not car either way, but I would have liked a reason.

The theme of the movie is a bit lost. It is about knowing who we really are. The movie opens and closes with Charlotte introducing herself. It is a moderately important scene when Julien first tells Charlotte his real name. Early in the movie Peter tells Charlotte, "War makes us into people we didn't know we were." Everyone in the movie has a secret, but it is hardly surprising considering this movie is about underground people and spies.

Charlotte Gray is a good movie that could have been great.