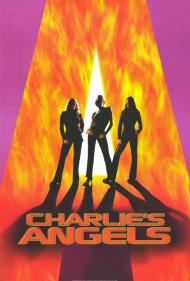 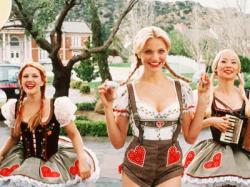 Charlie's Angels, the TV series worked for so long because it was a fantasy of three beautiful woman as low maintenance action heroines. They always appeared tough, intelligent and gorgeous. My personal favorite was Jaclyn Smith. She was always very lady like and classy.

The movie version is the same in that it is the tale of three hot private detectives. However the 'angels' here seem to have about as much class as a small town stripper. The only exception being Lucy Liu, who plays the smart one. Cameron Diaz is the dizzy one, and Drew Barrymore is the tough one. All three are sexy and eager to reveal skin. Hair flip scenes and cleavage are plentiful. The action is taken from The Matrix and the dialogue is loaded with sexual innuendoes.

The plot however is as amateur as it could be. A kidnapping and some espionage. It starts right in with some campy action where it seems these girls are pretty much super-heroes. They are able to do martial arts better than Bruce Lee. Then things have a moment of change when an actual threat occurs and the film almost takes a turn for the dramatic better. But it is short lived and soon the movie is back to campyville. The movie flows quickly but it ends up pretty much where it started. These girls can pretty much do anything and there is no suspense to think of.

Bill Murray, as Bosley. has little to do here and adds nothing to the movie. Sam Rockwell, who was so good in Galaxy Quest adds nothing as well. The editing sucks. One minute Bosley is running around the bad guys hideout then suddenly he's crashing through the bushes in a jeep.

This movie is so overindulgent in that its like gorging yourself on a bucket of Halloween candy. You start out thinking how good its going to be then by the end your so sick you wish you'd just had a granola bar. 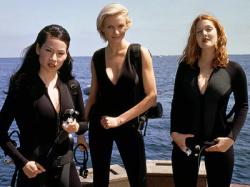 I agree somewhat with Eric's review. This movie offers little in the way of suspense. After the first few explosions and fight scenes, where the Angels emerge without a scratch or a hair out of place, you realize that nothing bad is ever going to happen to them and all tension is lost.

I think this movie's real problem is that it can't decide what it wants to be. Is it a spoof of the original? Is it an action movie? Is it a comedy? Is it campy or is it trying to take itself seriously? Any one of those choices would have worked, but instead it tries to do all at once and fails completely.

The movie does have a few things going for it. The stars are all easy on the eyes and as Eric mentioned, cleavage is bountiful. They are also all likable characters and you do want to root for them, but since their eventual triumph is assured, there really doesn't seem much point. There are also a few, and I do mean few, funny moments, but not enough to sustain the length of the film.

I blame the director for most of this movies faults. McG, as he wants to be called, is a music video director and it shows in this movie because that's all the weight this movie carries, that of a music video. 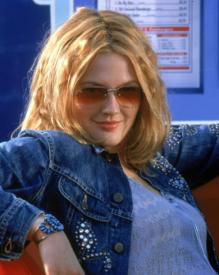 The fact that this absolutely insipid movie was a huge hit at the box office adds clout to the argument that our civilization is crumbling. To be completely honest I didn't make it through more than about the first fifteen minutes of this celluloid trash. But to get my in-depth opinion simply read my brothers reviews and omit every positive comment.