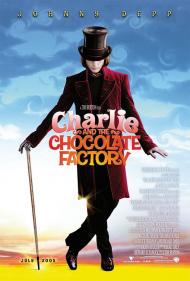 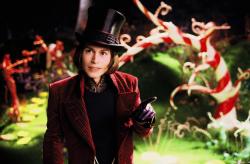 Johnny Depp as Willy Wonka in Charlie and the Chocolate Factory.

As a huge fan of the original Willy Wonka it was with some trepidation that I went to see the new remake starring Johnny Depp. My first thought afterwards was that the two movies should exchange titles. The first one was about Charlie Bucket. It was his story that the movie focused on. In the new one, which is titled Charlie and the Chocolate Factory, it is the candy maker Willy Wonka whose cathartic journey is at the real center of the story.

As everyone knows by now Tim Burton is great at visuals and Johnny Depp is a great movie star and talented thespian. Accordingly this version has great eye candy (but the pacing seemed a bit sluggish) and Depp is a more obviously funny Wonka than Gene Wilder. Depp speaking in a contrived high-pitched voice rolls his eyes and hams it up like Carol Burnett spoofing Norma Desmond.

In interviews both Depp and Burton have said that they envisioned a darker version of Willy Wonka. Boy are they wrong. Gene Wilder's Wonka exuded much more of a sense of danger. He also conveyed pathos better than Depp does. In my opinion his performance remains definitive.

Another thing missing is the sense of mystery. In the original movie the golden ticket holders knew only that they would receive a lifetime supply of chocolate. In this version they are told ahead of time that one of them will be awarded a special prize.

In the original Charlie and Grandpa Joe steal Fizzy Lifting drinks and at first it appears that they, like all the other children, have failed. In this new version Charlie is a wise little saint who teaches the emotionally damaged Willy Wonka about family.

The Oompa Loompa's look like a bunch of clones and the songs they sing are hideous.

Fair or not when a beloved classic gets remade it is inevitably going to be compared to the original. In that regard Charlie and the Chocolate Factory is no Willy Wonka. 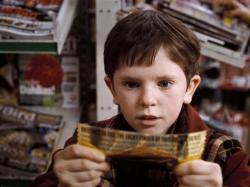 Freddie Highmore in Charlie and the Chocolate Factory.

And thank god it's not! While I agree that Wilder's rendition of Wonka remains a classic, he is really the only memorable part of the original. This updated telling of the story is superior in every other way. As for Depp, I won't say that he eclipses Wilder as Wonka, but he has the benefit of being in a better film.

Patrick seems obsessed with comparing this movie with the original. Personally, I was so caught up in the humor, which borders on the Pythonesque, to ever stop to worry about how the movies compared. Depp's performance is wonderfully wild and eccentric. To me he sounded more like Karen from Will and Grace than a Carol Burnett character. (Note to Patrick, it's time to move into the 21st century. Even your comparisons are 30 years old.)

I've never been a big fan of Burton. He always seems too willing to sacrifice substance for the sake of style. Beetlejuice and Big Fish are the only films of his that I've really enjoyed, until now. His style is still rampant in this movie, but it also features a brilliantly funny script and Depp, who manages to out weird anything Burton can throw up on the screen.

The one thing I do agree with Patrick about is the Oompa Loompa's songs. They don't fit and they do slow the movie down. They're not funny and with some of them it's difficult to even tell what they're singing.

While there will undoubtedly be many fans of the original, like my brother Patrick, who won't be able to enjoy this version, what they and he will fail to notice is that this movie is an instant classic and will undoubtedly become as beloved by future generations as the old version has been. It's got loads of humor to spare, a classic performance by its lead actor, and the wildly imaginative visual style you'd expect from a Burton film. What's not to love? 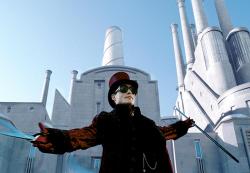 Johnny Depp in Charlie and the Chocolate Factory.

The songs for one. I could hardly make out any of the lyrics. The point of the Oompa Loompa songs are to act as moral commentary when each child learns an overdue lesson. Without being able to discern what they are singing in the songs renders them completely moot.

Scott called Patrick obsessed because he compares this to the Gene Wilder version. The 1971 film is a classic that children today still watch and love. It is expected to think of one when watching the other. My sons love the first version and left the theater making all kinds of comparisons between the two. "Who is the weirder Willy Wonka?" My eleven year old asked. I pointed out that Depp's Wonka is more weird because Wilder's Wonka was just pretending. Depp's Wonka definitely has issues.

Johnny Depp has always bored me as an actor. Then he started doing comedies and I discovered that he can actually be very entertaining. With Captain Jack Sparrow and now Willy Wonka, Depp has proven to be a master comic actor. The more outlandish his characters the better he is.

Refreshing, and worth noting, is that this version has both of Charlie's parents. Unlike the original, this version celebrates the traditional nuclear family. That is so amazingly rare in family films.