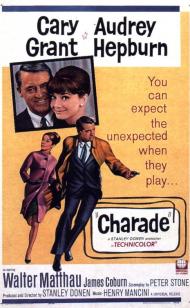 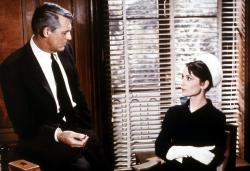 Can you name a more sophisticated Hollywood pairing than Cary Grant and Audrey Hepburn? Both always appeared on screen fashionably neat and charming beyond reproach with voices of such distinct refinement. I am not sure what these two were like in real life, but their onscreen personas blend perfectly.

Hepburn plays a clueless woman whose husband was recently killed. With the help of a mysterious stranger, Grant, she tries to solve the murder. But whom can she really trust, and who is just playing charades?

Charade was one of Cary Grant's last films (he would only make two more), however, his charm seemed to grow with age. In one scene Audrey Hepburn asks him; "Do you know what's wrong with you?" "No, what?" Grants replies. "Nothing!" Hepburn smiles. His limitless charm is the best thing about this movie. Even when being rude he sounds polite. "Why do you think Tex did it?" He asks Hepburn at one point. "Because I really suspect Gideon and it's always the person you don't suspect." She answers. "Do women find it feminine to be so illogical, or can't they help it?" Grant remarks. It's a sexist statement but it doesn't sound insulting when he says it.

But, Grant is more than just a charmer. He also plays the action hero; fighting George Kennedy on a rooftop, racing through Paris, and shooting it out at the film's end. He also demonstrates his great comedic skills. My favorite scene is when he showers with his clothes on trying to avoid Hepburn's sexual advances.

Hepburn does not fair as well. She basically plays an airhead. She confesses to being in love with Grant after only knowing him a short time. Then she discovers that he lied to her on a huge scale, but within moments she is back to loving him again. When she first meets Grant she says, "I already know an awful lot of people and until one of them dies I couldn't possibly meet anyone else." To which Grant replies, "Well, if anyone goes on the critical list, let me know." Her husband was murdered and she is caught in the middle of something sinister yet she never acts anxious or worried. She just smiles at Grant a lot and goes wide-eyed whenever something surprising happens. Charade is not her best work.

This movie almost succeeds. You never know what the next scene or phone call might reveal. You are never sure whom to trust. However, it can't decide if it wants to be a thriller or a romantic comedy. Too often the level of excitement is thrown off by a romantic interlude. Too often we simply see Grant and Hepburn dining or strolling as lovers and not people whose lives are being threatened. The pace and tone are completely awkward.

The saving grace of this film is the pairing of two enormous movie stars. Even when the plot becomes convoluted you still have them spouting some good dialogue, "So you think I'm the murderer? What do I have to do to convince you that I'm not, be the next victim?" Grant asks Hepburn. To which she replies, "Well that would be a start." 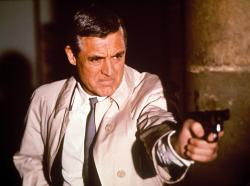 I agree with Eric that the tone and pacing of Charade is a bit uneven. It is like a Hitchcock thriller but also spoofs the genre at the same time. Still, for me, it works. The comedy, action and romance are all mixed up, but in a good way, like a perfect cocktail.

The pairing of Grant and Hepburn is indeed inspired even if he does come off much better than she does (again agreeing with Eric). My favorite moment of his is on the boat at night when he tells her about his career as a thief and that not many people are fortunate enough to do what they really love for a living. It may be the character's words but it is easy enough to apply them to Cary Grant himself.

Eric mentioned that Grant would make only two movies after this one. What he didn't mention is the fact that this is the last real screen appearance of the Cary Grant as romantic leading man persona. In Father Goose (1964) he does have a romantic relationship with Leslie Caron but he plays a scruffy looking old beach bum. And in his last movie Walk, Don't Run (1966) he is once again the dapper Cary but this time he plays the matchmaking uncle to a younger couple. This fact alone makes Charade memorable.

One reason the relationship between Grant and Hepburn works so well - apart from the fact that they look so good together - is that the age difference between them is never downplayed. They mention it throughout the film and in fact Grant insisted that she pursue him in the movie so that he wouldn't come across as a dirty old man.

The supporting cast is filled with recognizable faces and they all do a good job of holding their own against the two luminous stars. James Coburn as Tex is my favorite.

It's interesting that this movie came out the year after the first James Bond movie Doctor No. Cary Grant would have made the perfect Bond. In fact his character makes a few jokes after moments of action much like 007. Clearly this movie was influenced by Bond. 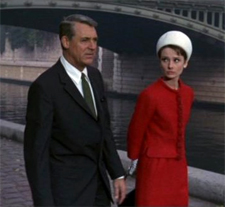 Grant and Hepburn have great comic timing together.

I agree Patrick, this movie does bear some resemblance to a Bond movie. Even the opening credits are similar to the opening credits of Dr. No, which isn't that surprising I guess, since they were designed by Maurice Binder, who also designed the credits for 14 of the Bond films. Cary Grant was also one of Bond author Ian Fleming's first choices to play 007 and he could have made a good one, but only if the movies had been made 10 years earlier, because clearly Grant is too old for the part here (although younger than Roger Moore would be by the time he left the part).

Much more than a Bond movie though, this is much more reminiscent of a Hitchcock movie, as you also mentioned Patrick. In fact, it's been called, "the best Hitchcock movie that Hitchcock never made." Although it does contain more humor and light-hearted moments than your average Hitchcock film. Plus, if this were a Hitchcock film, surely Audrey Hepburn's part would have been played by a blonde.

I think what we all agree on is that Grant is terrific here. To me he's the greatest classic movie star. He had charm, looks, comic timing and the ability to perform believable action. Plus he was just so fucking suave. Not every sex symbol from Hollywood's yesteryear holds up today. You watch them and you think, "Really? Rudolph Valentino was a sex symbol?" (For example). Grant though, if he was put in a time machine, could and would be a star today. He might be older in this part, but his charm hasn't aged at all and he still manages the action scenes with great aplomb. And luckily the script acknowledges his age, which really helps the story and their relationship.

I do think that you guys are too harsh on Hepburn. Yeah, her character is kind of flighty, but I like her. Does every character in every movie have to be a brainbox? I found her to be charming. I love the scene where the two of them are walking along the river where Grant buys her the ice cream and she spills it on him. Their conversation is great. She keeps changing the subject unexpectedly and throwing him off his stride. The dialogue here, and in the rest of the movie is very well done.

Certainly the humor and the romance are the best part. There are only a couple of action scenes and they're okay, but the real joy is definitely from watching Hepburn and Grant together. Apparently Grant felt the same way. He was quoted as saying that "All I want for Christmas is to make another movie with Audrey Hepburn." It's too bad they never would appear together again.