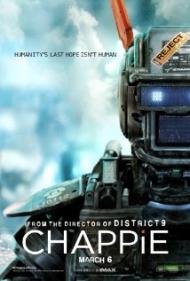 Dev Patel and Chappie in Chappie.

Chappie is writer/director Neil Blomkamp's third feature film. I thoroughly enjoyed his first movie, 2009's District 9, and I absolutely detested his second movie, 2013's Elysium. Chappie falls halfway between those two as I can't muster anything stronger than ambivalence towards it. It has an intriguing concept, and Chappie himself is pretty cool, but the script doesn't live up to its promise. It is content to become a run-of-the-mill robot action flick. It purports to examine the question of just what a consciousness is but it never delves very deeply. I don't want to spoil the ending but if you think about it much it's really quite ridiculous.

I wish the movie had focused more on the relationship between Chappie and the Dev Patel character. It would have been interesting to see Chappie learning how to be “human” while going through everyday experiences. Instead the plot has him fall immediately into the hands of some so-dumb-they're-almost-comical villains. They're cheap thugs who live in some abandoned factory building. Chappie bonds with them, even calling them mommy and daddy. They're vile people but the script romanticizes them.

Hugh Jackman and Sigourney Weaver are the real villains. She's the capitalist bitch that runs the defense company in Johannesburg that makes robot cops. Jackman (sporting a most unflattering hair cut), is a zealot who has created his own massive police robot that he's anxious to put into use. He also represents religion as the script has him refer to Chappie several times as being a “Godless” creature without a soul. But this turns out to be just another concept the movie brings up but doesn't know what to do with. An action scene squashes any further exploration of the topic.

Chappie is a lovable chap. He's an innocent being eager to learn and explore. He's childlike, very trusting and gullible. Sharlto Copley provides Chappie's speaking voice and he does a great job. Chappie sometimes refers to himself in the third person such as, “No. I can't shoot people. Chappie no crimes!” Like Yoda or Jar Jar Binks Chappie is fun to imitate. You may find yourself talking like him as you leave the theater.

An opportunity was missed here. Chappie could have been so much better. Neil Blomkamp is a great director with a signature style, and he comes up with fascinating ideas, but he should leave the actual screenwriting to someone else.

Patrick's right. The central idea of a robot with consciousness and what it means to be alive versus merely functioning, is one that is rife with possibilities, only Blomkamp explores almost none of them. This would have been okay if he was looking to create a blockbuster, but he seems to be trying to create a thought provoking story and failing.

Clearly Blomkamp has a very humanistic view of the universe. As Patrick noted, Jackman as the villain is shown to be a religious zealot while Chappie is able to reduce consciousness to a binary level and store it on a thumb drive. These contrasting viewpoints never lead to anything interesting however, as Jackman is such a cartoon villain.

Sigourney Weaver plays as paper thin a character as Jackman. She's supposed to be a successful business woman, but yet when her chief engineer brings her the idea of creating artificial life, she dismisses it out of hand without bothering to explore the idea. Obviously her financial success was a fluke.

It's not only the villains who are under developed. We learn next to nothing about Deon (Patel). Despite his prominence in the previews, his part is relatively small. The cheap thugs Patrick mentioned get more screen time than he does and they're such vile people that spending time with them isn't very pleasant.

As the title suggests, Chappie is the real star. He's as loveable as Patrick said and the technology that brings him to life is superb. It's just too bad the storyline doesn't do enough with him. 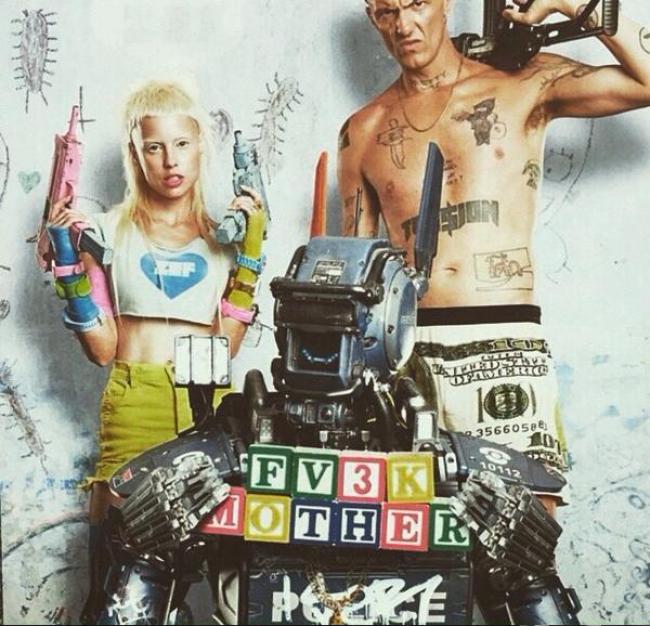 I got something different from Chappie than my brothers. Patrick wished the movie had focused more on the relationship between Chappie and Deon, while Scott noted that we learned next to nothing about Deon. Patel’s character has one role in this film as a God figure or at least a representation of good. He proudly tells Chappie, “I am you’re creator.” He wants Chappie to be artistic, peaceful and be used for positive things.

My brothers thought the idea of a robot with a consciousness and what it means to be alive versus merely functioning is where the story was going. That was not at all what this movie was about to me. Chappie is an allegory to a criminal society and all of the horrible people who have children and raise them to follow in their low life style. Patel shows up every now and then like a nagging conscience reminding Chappie that, “I am your maker.” And that he was not intended to be the way he is turning out.

Chappie doesn't so much learn how to be “human” but grow up. All of his actions resemble that of a child. He becomes nervous when left with some teen thugs. One adult notes, “Hell of a first day of school.” Just like a child away from his parents for the first time, Chappie is unsure of himself and he gets picked on. Blomkamp is making a social statement. He shows us how Chappie’s mommy and daddy turn him into a criminal. Daddy tells him what is cool and teaches him to be aggressive and to shoot a gun. Like any child, Chappie wants his parents' love and will do what they ask, trusting in their decisions. You could easily have made this film with a naive 13 year old boy in the role of Chappie.

Jackman does not represent religion so much as he represents Satan or evil. Like Lucifer he is first on God’s side but he soon shows his true colors and works against him. The use of his metallic monstrosities is like Satan leading his fallen angels to take over heaven.

The central idea of a robot with consciousness and what it means to be alive versus merely functioning, is one that is rife with possibilities, but I believe it was not Blomkamp’s intention. Chappie being alive is not the point but how he is influenced and betrayed by the people he trusts the most, his parents. Chappie is like a child, a blank slate ready to be written on. In the hands of decent parents he would have become a productive member of society while in the hands of these idiots he became a criminal. Note that even though his parents are as stupid and despicable as they come, Chappie still protects and loves them as any child who knows nothing else would. Chappie shows how humans can perpetuate and encourage violence.

With Chappie, Blomkamp has created a beautiful parable that reflects what it means to be good and evil and how parents influence the development of either in their children.