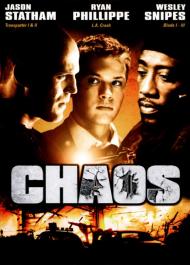 Chaos is a combination of two other Jason Statham movies; War and The Bank Job. I cannot tell you exactly why, because that will give too much away. The best news is that even though it only had a very limited release, it is better than both films.

Statham plays a cop recently fired after a hostage situation went bad. He gets called back into service when a bank robber, who is holding forty hostages, asks for him by name. Phillippe plays a new cop assigned to partner with Statham as well as keep an eye on him. Like any good mystery, the movie keeps changing directions as the cops keep learning more about what is actually going on. I have to admit I did not have it all pieced together until the last 20-30 minutes.

Statham has quickly become the best action movie star of the United Kingdom. He is not actually a great actor, but he plays his standard tough guy with experienced charm. Phillipe is young enough looking to still play the rookie/newbie roles even though he is only 2 years younger than Statham. They make a good team. Statham’s grizzled masculinity meshes well with Phillippe’s boy band looks. Although I doubt a sequel is anywhere in the making, I would certainly be up to seeing it.

Giglio wrote and directed this film. The entire movie takes place in one day. The pace good not be any better. I have two really minor complaints. The scenes where Phillippe is supposed to be riding a motorcycle look quite amateurish. We see a shot of the motorcycle with supposedly Phillippe riding it. Then we get a close up of him with only the sky in the background. Early in the movie Statham’s cop gets reprimanded for how he handled the first hostage situation. Some one says to him, “It’s not the wild wild west anymore.” Didn’t that saying go out of fashion 50 years ago, considering there has not been a wild west in 100 years? The best line in the movie is, “You picked the wrong day not to use the ATM.” My personal favorite is when a news reporter asks Statham for a few words and he says, “Blow me.”