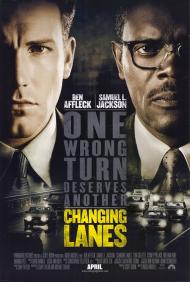 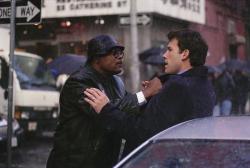 Ben Affleck and Samuel L. Jackson face off in this story of what happens to two men caught in a minor fender bender on the FDR. Affleck is Gavin Banek a young lawyer on his way to court with a file which contains the power of attorney signed by the deceased chairman of a multimillion dollar charity. His job depends on these papers being delivered to the judge. Jackson is Doyle Gipson, a recovering alcoholic on his way to a custody hearing. He has just been approved for a loan to buy a house in Queens and he hopes to convince the judge and his ex-wife to give him another chance at being father to his two young boys. The accident causes Doyle to be late and he loses the hearing. However he has the red file that Gavin mistakenly dropped in the road during their exchange. The rest of the movie shows to what extreme these two are willing to go to in order to resolve their problems.

I found this movie to be morally complex. It touches upon human greed as well as what it means to be a black man in a white man's world. Samuel L Jackson's rage and helplessness is a powerful thing to witness. Still Ben Affleck is the emotional center of the story. He is faced with realizing just how far he is willing to go to maintain the lifestyle to which he has grown accustomed. His boss and father-in-law, played by Sydney Pollack, confuses the issue by telling him that even the supposedly benevolent head of the charity was really corrupt. This is after Gavin has discovered that the firm has stolen three million dollars of the charities money. At this point in the movie Ben Affleck does a brilliant job of conveying Gavin's confusion at what constitutes a 'good' life.

Unfortunately the ending is far too pat and cloyingly sweet. Don't get me wrong there are some movies that should have happy endings. But the mood and tone of Changing Lanes up until the last twenty minutes is very dark and cynical. This makes the abrupt change in Gavin's morality seem like a gimmicky plot device.

Still this is, for the most part, a well written and acted piece of celluloid that at least raises a few questions about the human situation; albeit with a cop-out ending. 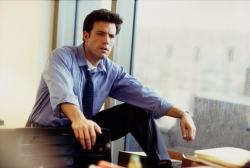 This is not a complex moral movie. This is a very heavy handed, in your face moral movie. This movie says that no one is perfect, and that if we would just be a little nicer to each other the world would be a better place. I have read children's books with more complicated moral issues.

Everyone in this movie has problems and flaws. No one is a victim and no one is a hero. This movie is not at all about "....what it means to be a black man in a white man's world," as Patrick wrote. Samuel L. Jackson's character has problems in this movie, but race is never the cause or effect of any of them. He was a drunk, which caused marriage problems. He chose how he responded to Affleck. Being black has nothing to do with any of that.

This could have been a great character study of how people make bad choices when under pressure. Instead, it goes over the top by having Affleck destroy Jackson's credit and by having Jackson loosen the nuts on Affleck's car and nearly killing him. A toned down movie would have made them all a little more human and a little more likable.

As it is, there is not one likable character to root for. Affleck's greedy lawyer is wealthy and happily married to a woman who does not care about his ethics, be they good or bad. Jackson's character is in a hole of depression. One he dug himself by being a drunk. Together these two unhappy men take out their frustrations on each other. 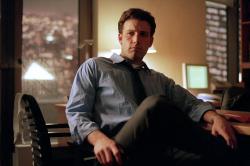 Hollywood rarely puts out movies with meaning and when they do those movies are usually so heavy-handed that all entertainment value is lost. Just look at all those movie from the 2000s where Hollywood tried to comment on the Iraq war for examples of what I mean. Changing Lanes is a movie with a meaning that does at least try to entertain, even if it never does quite get the balance right between human drama and some silly over-the-top nonsense. It also suffers from lapses of logic.

I know that they're trying to tell a story in less than 2 hours, but both men go from normal, if troubled, human beings to psychopaths far too quickly.

Affleck's Gavin decides to try and extort the file back from Jackson's Doyle without even trying to call him first? I know that Doyle was angry when Gavin first asked for it back, but to go nuclear without at least trying one last time to negotiate with him, seems very extreme. The ease at which the hacker he hires is able to destroy Doyle's credit and make him bankrupt is of course a joke and simply demonstrates how to Hollywood technology is akin to magic. And the fact that Gavin then calls Doyle and confesses to destroying his credit and threatens to do more is perhaps the dumbest plot point of all. Why doesn't Doyle simply call the police and play them the voicemail message? Surely a high-powered attorney would know better than to leave that kind incriminating evidence. Of course, a smart, high-powered attorney would never have lost such an important file to begin with.

Like Eric, I'm a little baffled by Patrick's statement that the story shows "what it means to be a black man in a white man's world." Doyle assaults the two men from the bar because he considers them racist, but that's the only scene that really deals with the issue of race. It never comes up between Doyle and Gavin.

Despite all the plot holes and contrived details, there are some good things about this movie.

The performances are pretty good. Given the great cast, perhaps that's not so surprising. Apart from the actress playing Doyle's wife, every other major role is played by a recognizable name actor. They all do a solid job and help to cover some of the movie's more glaring problems.

I also rather enjoyed the message of the film. Eric often complains about liberal Hollywood, but the message here is a conservative one. These men learn to stop thinking of themselves as victims of fate and to take personal responsibility for their problems and the direction of their lives. Instead of remaining passengers, they take the wheel and change lanes.