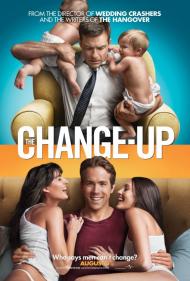 Jason Bateman and Ryan Reynolds in The Change-Up.

The body swap is a pretty creaky plot device. If you're going to drag it out of mothballs, you better have a new spin to put on it. The gimmick here that is supposed to make it fresh is that it's rated-R. At least that's what I've heard several of the cast members say in interviews. It's not enough though to really make it very original, it just allows it to be a bit more shocking, which it uses as a prop to support the jokes.

Bateman plays Dave, a successful attorney and family man who is about to be made partner at his firm. Mitch, played by Reynolds, is an old friend of Dave who works at being an "actor" but seems to spend most of his time fucking around and not doing much of anything that might contain a whiff of responsibility about it. After one drunken night together they end up pissing in a fountain together while simultaneously wishing that they had each other's lives. Sure enough, the very next morning, Mitch wakes up in in Dave's bed, next to Dave's wife, inside Dave's body, while Dave wakes up in Mitch's bachelor pad, inside Mitch's body. To be fair, some hilarity is to be found as a result - mainly due to the chemistry between Bateman and Reynolds - but not as much as I was hoping for.

Too many jokes rely on shock value to make you laugh. You know what you're getting right from the opening scene where Dave gets pooped on by one his babies and the poop goes straight into his mouth. Later, Dave, inside Mitch's body, gets a late night booty call, but when the woman drops her overcoat to reveal she's almost naked underneath, you see that she's 9 months pregnant and to top it off you can see the baby move inside her stomach.

Although it's silly to expect any kind of realism from this movie, would Dave really send Mitch into his office to work on the most important deal of his career? Wouldn't it have been much safer for him to fake an illness? I mean, when Mitch does go in, he behaves so out of character that I'd think that his bosses would seriously want to have him examined by a doctor.

Apparently there is not only a shortage of story ideas in Hollywood, but also a shortage of actors to chose from as they keep reusing the same ones this year. This marks Bateman's third movie of 2011, following Paul and Horrible Bosses. Reynolds has already appeared in Green Lantern. And Olivia Wilde just appeared in last week's Cowboys and Aliens. This is the hardest working cast in Hollywood right now.

During a recent interview, Olivia Wilde mentioned how her brief nipple slip in this movie was created by CGI. She wore pasties during filming, but they added nipples in post-production. Leslie Mann and Mircea Monroe also show their breasts, but, although I don't have any proof, they too look faked. This is a worrying trend. I mean, if you can't trust that you've just seen some actresses' tits, what can you trust in this world? It also makes me wonder why they didn't CGI some penises onto Bateman and Reynolds for the peeing scene since the two of them do the least convincing urination seen on film.

The movie tries to throw some life lessons into the mix as both Dave and Mitch learn some things about themselves. Dave's wife tells him things about their marriage while she thinks he's Mitch and Mitch's Dad tell's Mitch things while he thinks he's Dave. It kind of works, but is also at odds with the gross out humor. It's difficult to be heart warming and push the envelope of good taste.

In baseball, a change-up is an off-speed pitch that is meant to fool the batter into thinking it's a fastball. It's a subtle pitch, which is the exact opposite of this movie. It's easy to see where it's going and how it will end. For the most part, it's a fairly entertaining ride, but not a perfect one. I didn't hate The Change-Up, but I sure didn't love it either. 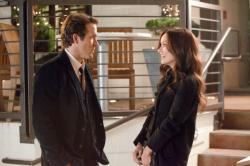 This film is unique in that it is two men of the same age switching bodies.  Most of the genre are that of an older person and a younger person switching.  This was the case with Freaky Friday and 17 Again, which Leslie Mann also played the wife of a man who switches bodies with another person.  Although they are actually seven years apart, and look it, Reynolds and Bateman are playing guys who went to school and grew up together.

I am not sure how they filmed this movie, but each actor does a good job of acting like the other.  Bateman carries himself in the manner of Reynolds slacker character, while Reynolds shows restraint in playing the conservative Dave.  I wonder if they each acted out the scenes first only to have the other actor then film it, mimicking the other.  I am not sure, but they did a decent job of it.

Scott and I recently had a conversation where I expressed a lack of time to myself while Scott stated he had all kinds of free time.   This made us a bit like Dave and Mitch.  In that sense, the movie is relatable.  I felt Daves stress and understood his pressure created by work and family obligations.  I used to dream of travel and adventure, now I just dream of having time to do what I want.

What father cannot relate to Dave saying, "Having children, is, it's like living with little mini drug addicts. You know, they're laughing one minute, and then they're crying the next, and then they're trying to kill themselves in your bathroom for no good reason. They're very mean and selfish and they burn through your money and they break shit."

The Change Up is definitely an adult film and the best comedy since Horrible Bosses.  Jason Bateman is on quite a roll.

Ryan Reynolds and Jason Bateman in The Change-Up.

The Change-Up features a talented, likable cast in a completely unoriginal story. You pretty much know everything that’s going to happen long before it actually does. The set-up, the initial disbelief and confusion, followed by the magical adjustment period where the characters are enjoying themselves in their new bodies, and finally the predictable happy ending all play out as you would expect.

Thankfully the cast is able to breathe a bit of freshness into this very stale setup. I agree with Eric that the two male leads do a good job of emulating the other actor/character’s mannerisms. They make the movie funnier than it has any right to be.

Scott questioned the believability of Dave sending Mitch to his job during a very important deal and he has a good point. I spent the movie wondering just how Mitch paid his rent on his bachelor pad since he appears to “work” so rarely. And the subplot involving his strained relationship with his father goes nowhere while wasting the talents of Alan Arkin.

Here comes a rant: I am not a fan of the gross-out sight gags which pervade modern cinema. And whereas they used to dwell only in raunchy frat-boy style comedies they have now invaded romantic comedies and even animated children’s movies. These filmmakers treat today’s audiences like junkies. The only way to keep getting laughs in this manner is to keep upping the dose. Thus it isn’t enough that we see Dave get shit all over his face, no that isn’t funny enough, now he has to take a mouthful of his babies’ poo. If I want to watch actors eat shit I can rent one of The Human Centipede movies for god’s sake. I blame the internet for desensitizing us to visual grossness but seriously can we call a moratorium on all defecating, urinating and projectile vomiting into peoples faces already? It is just plain lazy writing and as long as audiences pay to see this crap (pun intended) it will continue to splatter (again pun intended) across movie screens.

Sure there are some laughs to be had in The Change-Up but trust me when I say you’ve seen it all before.