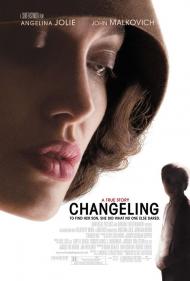 Jolie will probably get nominated for an Oscar for this part, but I can not generate any enthusiasm for her winning.

Where is the pleasure in a movie like this? It's long, it's depressing and we're expected to pay for the experience of seeing it? I'm not saying every movie should be sheer escapism, but when I watch a movie I don't want to feel depressed by the end of it. I was even deprived of the pleasure of staring at Angelina Jolie for 2 hours and 20 minutes since she seems to have starved herself into the look of someone who just left a concentration camp.

The movie tells the "true" story of the disappearance of 9 year-old Walter Collins. His mother, Christine (Jolie) reports him missing to the police, who a few months later are happy to announce that they've found him. The only problem is that they've found the wrong boy. When Christine protests they tell her that she's crazy, despite the fact that this new Walter is 4 inches shorter than he was when he left and is now circumcised when he wasn't before. After she takes her complaints to the press, the police have her put away in a mental institution. It's only after a serial killer is discovered to have been killing young boys, including, it seems, Walter, that Christine is released and she sues the police.

Apart from seeing the authentic seeming recreation of 1920s Los Angeles, I can't say that I enjoyed anything about this movie. Jolie's performance is good, but I found the voice she used to be irritating. It's very quiet and she always seems to be struggling to get a breath like she has asthma or something. She doesn't exert herself until a scene near the end of the movie and that scene seems out of place and very Hollywood, although it's more like what we've come to expect from Angelina Jolie.

Like so many movies that come out during award season this one runs too fucking long. This movie is depressing to start with and runs on and on for at least 45 minutes too long. Even though the last half of the movie is the least depressing as Christine is vindicated, by the time we reached that portion of the film I just wanted it to be over with.

Jolie will probably get nominated for an Oscar for this part, but I can't generate any enthusiasm for her winning. Sure, she does a good job, but the last thing I want is for anyone to be encouraged into making other movies like this one. If it wasn't for Eastwood's much better Gran Torino, I'd suspect the old guy was losing it, but maybe it's just a case of him making too many movies too often. They can't all be winners. 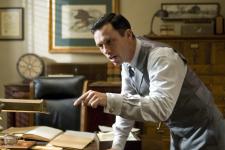 Although he is not the kidnapper, Captain Jones is the real antagonist in the story.

The Changeling is definite proof that reality is stranger than fiction. In an interview given years after the events of this movie, the man who claimed, as a child, to be the missing Collins boy, said that he did it because he felt sorry for Christine after hearing about her. That is not the strange part. It is quite natural for children to do what they think will please an adult. The strange part is that the LAPD actually thought to question a woman’s judgement in identifying her own child.

With that in mind, the movie is told from the wrong perspective. Sure Jolie is the bigger star and she is working on an Oscar nomination, but her story is not what interested me. She reacts as any mother would. The more interesting story would have been that of Captain Jones played very well by Burn Notice star, Jeffrey Donovan. The movie claims that he is so eager to make the LAPD look good that he forces this child onto Christine as a PR stunt. Although the movie mentions that the LAPD needed some good press, it did not explain why he did such an outlandish thing.

As Scott wrote, the length is a bit tedious. The movie starts as a missing child story and then becomes a story of women being mistreated by the political/medical system. Throw in the politics of the police and you have a movie with too many plots moving slowly in the same predictable direction.

Jolie does a fine job and I liked the scene where she exerts herself. It probably never actually took place in real life, but Christine had to have that scene. After downplaying the entire film, she needed a moment where she gets to let go. Donovan has a dangerous look in his eyes. I wish he had a scene where he got to let go. It always appears as if he is about to do something that will surprise you. However, just like the rest of the movie, he never does.