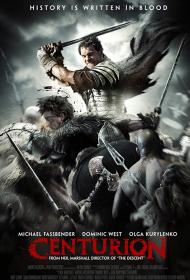 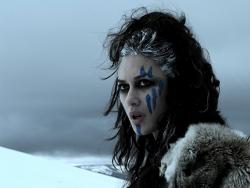 Sometime around AD 117, the 9th Legion of Rome disappeared from written records.  One theory as to their fate is that they were massacred in the north of Britain, although there's other evidence that places them in southern Europe after that date.  However, this movie sticks with the British theory and briefly tells of the massacre, but is mainly concerned with following a small group of Roman survivors as they try to retreat to safety following the lost battle.

When the Roman Governor of Britain wants to score some points with the Emperor before returning to Rome, he sends the 9th Legion, led by General Virilus (West) into Scotland to destroy the Picts who have been harassing the Roman garrisons.  Accompanying the Legion is a Pict guide, the mute Etain (Olga Kurylenko of Quantum of Solace and Hitman).  Instead of helping them though, Etain leads the Legion into an ambush where the General is taken prisoner and the rest of the Legion is completely destroyed apart from a handful of men.  The survivors group together and decide to attempt a rescue of the general and then flee to the Roman lines, with the only thing standing between them and safety being the entire Pict army.

Essentially, once the preliminaries are out of the way, the movie is one big chase.  The Roman survivors, led by Quintus (Fassbender), run for their lives with Etain in hot pursuit.  None of the Romans are given much personality, nor are they portrayed as sympathetic.  We aren't really given any urgent reason to hope that they survive.  Mel Gibson's Apocolypto was also a chase movie, but you were rooting for the character in that movie because he was racing to save his family.  Here, the Romans, who are the invaders, are merely racing to save their own lives.

Etain, who is played as the relentless huntress, is actually the most sympathetic character in the movie.  As a girl her family was attacked by Romans, her mother was raped and killed in front of her, she was then raped and finally the Romans cut out her tongue.  Is it any wonder she wants to hunt down and kill the people who invaded her country?  I would have rather seen a movie from her point of view.

Filmed almost entirely on location in the English countryside and the highlands of Scotland, there is plenty of scenery to look at.  The Romans run over mountains, through woods, jump off cliffs and float down rivers; all of which is filmed beautifully and makes Scotland look like a nice vacation destination.

The movie was written and directed by Neil Marshall, who did such a good job with the low budget horror flick, The Descent.  This effort isn't nearly equal to that one.  There aren't any moments here where you're on the edge of your seat or screaming for the heroes to escape.

The real fate of the 9th Legion may never be known, but I'm sure whatever happened to them was more interesting than this movie. 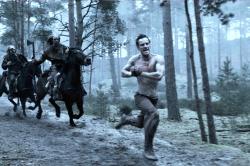 Quintus Dias getting some cardio work in before hitting the gym.

The one unique aspect of Centurion worth noting is the point of view of the story.  As Scott pointed out, Etain is in fact in the role of the hero, trying to rid her country of an invading force.  However, the movie is about Quintus Dias.  We follow him as he fights for his life.  Although he is a member of the invading army, I found myself rooting for him, and not the relentless Etain.

Etain has every right to act as she does, yet she comes across as evil.  She has no lines, as the Romans cut out her tongue.  Dias narrates, and describes his fears and insecurities.  "In the chaos of battle, when the ground beneath your feet is a slurry of blood, puke, piss and the entrails of friends and enemies alike, it's easy to turn to the gods for salvation. But it's soldiers who do the fighting, and soldiers who do the dieing, and the gods, never get their feet wet."

Etain wears scary makeup like an American Indian on the war path.  He looks like he stepped out of a cologne advertisement.  The script has her acting as the killer, and he acting as the protector.   He tries to rescue fellow Romans or care for their wounds.

Had the movie shown him as against the war, and standing up to his superiors, it would have worked better towards making him the good guy.  But he takes no such stand.   In spite of that, I still found myself hoping he gets away from Etain.

The biggest plot joke though, is when he comes across the hot-as-hell blonde lass living in the picturesque country side by the stream.   If this film is not going to take itself seriously, how can the audience? 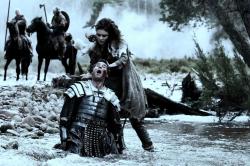 Olga Kurylenko as Etain showing why you don't want to mess with her in Centurion.

Centurion works purely as an action/adventure movie with nice scenery. It is fast paced and full of gory battles. It is far more entertaining than this year’s horrible The Eagle.

Olga Kurlyenko (who resembles a young Catherine Zeta-Jones) makes a great warrior with uncanny skills as a tracker. She is not someone you ever want to cross. By her side she has an equally vicious blonde female warrior.

There is also the beautiful (and mysteriously well-groomed) witch living by the stream that Quintus Dias and his few surviving fellow soldiers meet while running for their lives. With so many strong women is this movie making a statement about feminism?

There are several well-staged battle scenes with rivers of blood splashed across the screen. But, as my brothers wrote, there is virtually no character development. The General is one of the most interesting of the group but he unfortunately gets killed fairly early on. He has one good scene where a courier with a message for him from the Roman Governor of Britain mistakes the General for one of his foot soldiers.

SPOILER ALERT: While the real fate of the 9th Legion will never be known this movie can’t resist a happy ending. It kills off everyone except Quintus Dias. He gets to live happily ever after with his lovely British witch.