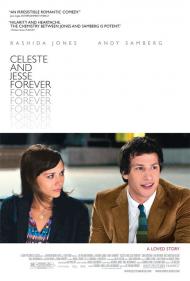 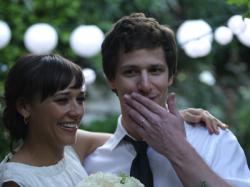 As has been said so many times on the pages of this site, the most important aspect of any romantic comedy is that the audience needs to want to see the two leads get together by the time the credits roll. And even though this movie is billing itself as a sort of anti-romantic comedy, in that the two leads start the movie married and end it divorced, the audience still needs to wish that they were together for it to have an emotional impact. Sadly however, that kind of longing is never generated.

The film stars Rashida Jones and Saturday Night Live's Andy Samberg as the title characters, both of whom are straight out of Judd Apatow's Male and Female Stereotypes 101. She's the career driven, serious minded woman, while he's the boy in a man's body. Why they got together is never really explained and they share little chemistry together apart from both inexplicably finding the idea of jacking off tiny inanimate objects to be hilarious (which it isn't, despite being forced to watch them do it twice).

Instead of the movie being about their developing love story, the focus is on the two of them learning to live without the other, or at least that's what it's supposed to be about, but we're only really shown Celeste learning that lesson. Samberg as Jesse, starts the movie as an equal player, but shortly into it is shunted aside so that the focus can be on Jones, who co-wrote the script.

Another important aspect of a romantic comedy, or any genre, is that the lead character should be likable. Yes, of course there are exceptions, but most of the time this holds true. And yes, part of the idea here is that Celeste learns to be more empathetic as the story progresses, but she still comes across as an arrogant snob, who is convinced that she's smarter and has better taste than everyone else, despite no strong evidence to support these theories. Jesse's not much better. He's a slacker who plays around at being an artist, smokes pot and sleeps around.

There are a few funny moments scattered throughout the movie, although there are nearly as many unfunny ones, including every scene with Elijah Wood who plays the obligatory gay friend of Celeste's. Jones is an attractive, capable actress and comedienne. This part could boost her stardom, even if she would be better served acting in movies that she didn't write. As for Samberg, he's merely okay as the male lead. It's certainly a good thing that he's funny and people seem to find him charming, because he's not going to make it on his looks. His Jesse is definitely punching above his weight with Celeste and the several other women in the film who seem to find him attractive.

Like its main characters, this movie is not as smart or funny as it thinks it is. Forget forever, I'll be amazed if I remember them or it at all.

The ironically titled Celeste and Jesse Forever paints a truthful portrait of the break-up of a marriage. High school sweethearts rarely stay together for life. Personalities aren't fully formed at that age and it is quite common for people to develop very different interests as they mature. The script accurately, and wittily, depicts this process. The movie begins with an opening photo montage telling Celeste's and Jesse's story, how they were high school sweethearts who married young. When the movie proper begins they have separated but are having a difficult time letting go. Jesse is clearly still in love with his wife but while she has grown up and taken on adult responsibilities, he has remained immature.

The set-up of the married couple having a spat goes back to the screwball comedies of the 1930s, only in those films the couple always reunited by the end. Celeste and Jesse Forever goes the Annie Hall route instead. (I don't consider this a spoiler since it was promoted as a romantic comedy about a couple who get divorced.) I'm also not suggesting this is as good a movie, because it isn't anywhere near being in the same league with that Woody Allen classic.

Even as she complained about his behavior, Celeste was enabling Jesse, allowing him to remain immature and financially dependent on her. Only by breaking away from Celeste was Jesse able to grow up and assume his manly responsibilities. I enjoyed this aspect of the story and found both Rashida Jones and Andy Samberg to be quite believable as high school sweethearts who've grown apart but are having trouble calling it quits. Jones (Quincy's daughter) is beautiful, can act, and has excellent comic timing. Samberg is funny too and although he's not exactly handsome, he is cute and exudes an odd sort of charisma.

Celeste and Jesse Forever's attempts at subverting the romantic comedy genre are only partly successful however. Where it fails is in the characters themselves, all of whom are walking, talking stereotypes. Scott pointed this out and I couldn't agree more. She's the same old career woman with the wise gay bestie we've seen a hundred times before, and he's the equally familiar pot smoking -but talented- slacker whose sidekick is the wisecracking white-guy-who-thinks-he's-black. In the end, despite its realistic portrayal of how relationships sometimes fail, Celeste and Jesse Forever is marred by its cookie cutter characters.