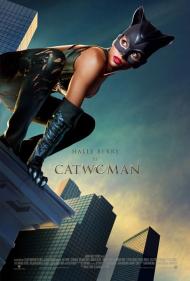 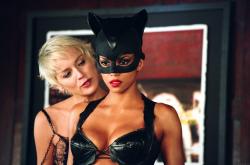 Why is it Spider-man gets to save New York from being blown up and Superman stops Luther from sinking California into the ocean, but Catwoman's big dilemma is preventing a deadly cosmetic from making it to market? And just when did she become a hero anyway? Although, to be honest, these questions are the least of this movie's worries. A more pertinent one might be, who approved this script in the first place?

In this latest reinvention of the Catwoman story, Halle Berry stars as Patience Phillips, a mousey little graphic designer at a large cosmetics company. While making a late night delivery of some artwork, she accidentally overhears some information about an anti-aging cream that her company will soon be releasing. It seems that not only is the cream addictive, but if you ever do stop using it, you'll die. Is that a message to plastic surgery obsessed Hollywood?

Patience is killed for her discovery, in a too long and tensionless chase scene since her death is already given away at the beginning of the film. She is brought back to life by a group of cats, led by Midnight who possesses a connection to the Egyptian goddess Bast. With her memory foggy about the night before, Patience – now Catwoman – must retrace her steps and try to figure out who had her killed and why.

While Halle does a decent – not great -- job in the lead role, the material she's given to work with is limiting. The love story between Patience and Police Detective Tom Lone (Benjamin Bratt) never gets off the ground, which isn't surprising considering what a weak character his is. Her scenes as Catwoman are the most entertaining, although she doesn't put on the suit until nearly a third of the way into the movie, and a majority of those involve CGI, with – unfortunately -- the transition from actor to cartoon being painfully obvious. She does get to strut her stuff in a tight and shredded leather outfit, flicking her whip, and talking catty, but she looks more like a porn star than a superhero.

The supporting cast members are all completely forgettable, from Patience's annoying work friend to Bratt's dull cop. Sharon Stone as Laurel, the aging model, and Patience's boss, manages to present the only character with any depth, at least at the beginning before she turns into just another cartoon character.

This is big-budget cheesiness built around the idea of getting Halle Berry into a sexy outfit, and while it accomplishes that, it fails on every other level. In the hierarchy of catwomen, Michelle Pfeiffer has nothing to worry about, and for that matter, neither does Eartha Kitt or Lee Meriwether. 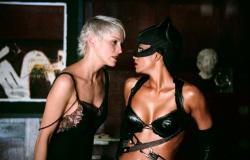 Scott you forgot Julie Newmar! She was the sexiest Catwoman from the television show. Halle looks damn good working that leather outfit. The bent over poses and that sexy walk make her one of the hottest Catwomen ever.

This movie is not as bad as I thought it would be. Sure it's cheesy, but most superhero movies are. The biggest mistake this movie makes is in using the name Catwoman. Superhero fans know the origin and story. If the makers of Catwoman are going to change the character they might as well change the characters name all together. It is a given strike one against any superhero movie that does not follow some established characterizations.

The biggest problem with Catwoman is that it is completely formulaic. It steals from Burton's Catwoman storyline. She seeks revenge on the people she used to work for that also killed her. It also reminds me of Daredevil. Both have overweight pals who give worthless advice and are apparently around as comic relief. The love stories are also quite similar and generate even less heat. In Daredevil they play fight on a playground surrounded by kids. In Catwoman they play basketball surrounded by kids.

Sharon Stone makes a great villain. She does "bitch" better than anyone! Kudos for her for playing a has been. With this movie, she solidifies that in real life. 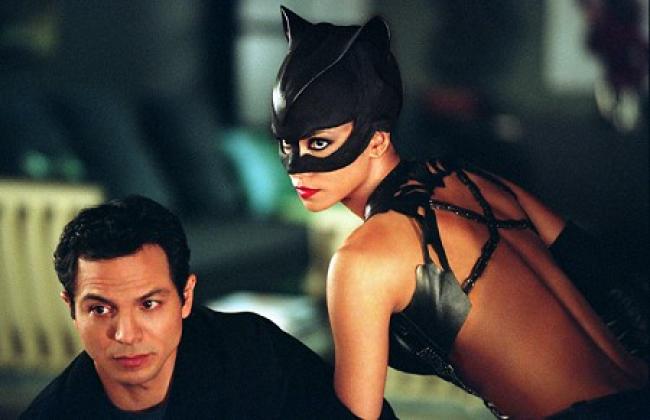 Not as bad as you thought Eric? That's funny because I think Catwoman is one of the worst big budget superhero movies ever made. I do agree with you that by completely changing the central character and her back-story the movie already had a strike against it, but that's certainly not the only problem here.

The acting is laughable. Halle Berry looks ridiculous moving about like a cat. She "won" a Golden Razzie for her performance as Catwoman, two years after her groundbreaking Oscar win. Frankly I don't think her career ever recovered. Benjamin Bratt seems stiff and unsure of himself, and there is no chemistry between him and Berry. Sharon Stone hams it up. Her climactic fight with the titular feline is the best action sequence in the movie. Stone probably loved filming the scene in that room where the walls are covered with blown-up glamor shots of her. What an ego boost.

The CGI that Scott already found to be pretty bad in 2004 has only gotten worse with time. It now looks as cheesy and fake as those old stop-motion special effects from the 1950s. Every time Catwoman climbs a wall or jumps in slow motion the switch from live-action to animation is painfully obvious.

And let's not forget the inane script. An ancient Egyptian goddess in the form of a cat brings Patience Phillips' dead body back to life?! And not only does she now have cat powers, she also has newly acquired cat tastes. She hates the rain and can't get enough fish or cream. Scott mentioned the fact that Catwoman has traditionally been on the wrong side of the law, usually as Batman's nemesis. Here she straddles the fence between heroine and law breaker. The audience is intended to root for her, but I just found her annoying.

Catwoman is as bad as its reputation.