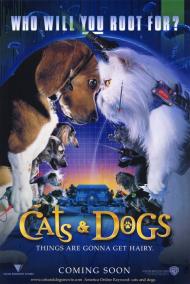 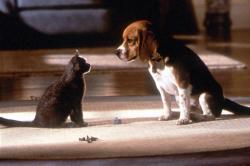 A cat and a dog in Cats and Dogs.

Cats And Dogs is a fun hour and a half for anyone who hasn't hit puberty. Its fast paced and dumbed down to appeal to children. The critters are all cute and full advantage is taken of the tired old 'boy and his dog theme.'

The movie takes the old rivalry of cats versus dogs to the nth degree. Here we have ninja cats and computer friendly dogs. Lou, a Beagle puppy, is mistaken for a secret dog agent and assigned to protect a family from the evil Mr. Tinkles, a furry white cat.

Jeff Goldblum and Elizabeth Perkins are the 2 B actors playing supporting roles to cats and dogs. They play the parents of a boy who at first doesn't want Lou around. They have little acting to do and genuinely add nothing to the movie. The animals are the stars here and depending on whether your an animal lover or not plays heavily on whether or not you will like this movie. I am not an animal lover and thus didn't care how this movie turned out.

However, this is a kids movie and it caters to them. For children this is a 3 star movie. For adults this is a 2 star film. 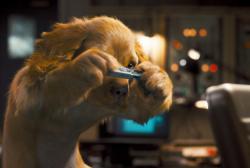 A dog takes a picture with his camera in Cats and Dogs.

As Eric said Cats & Dogs is strictly for the kiddies. Twenty-five years ago I would have loved this movie. The concept is fun and the animals are incredibly cute even though the plot is completely predictable and extremely far fetched. Good dogs protect humans from evil cats. You see these animals lead double lives. The one with us as dumb critters and another in an incredibly high tech underground world.

What makes the movie enjoyable is the all-star cast providing the voices for the furry pets. Among them are Susan Sarandon, Alec Baldwin, Tobey Maguire, Jon Lovitz, Michael Clark Duncan and Charlton Heston. Sean Hayes of Will & Grace fame steals the movie as the voice of the evil cat leader Mr. Tinkles. My favorite line is when he promises the mouse army that after the world is conquered their reward will be 16 pounds of Monterey Jack and the continent of Australia.

Great children's movies also entertain adults. This one doesn't. If you need to keep a roomful of children reasonably quiet this movie should do the trick. I can't think of any other reason to watch unless you happen to be a huge Jeff Goldblum fan.

You guys say that this movie is aimed at kids and that might be true, but it would have to be pretty damn young kids, because this is one of the stupidest, lamest movies it has ever been my misfortune to sit through. Seriously, they should show this movie in prisons as punishment or use the threat of it to get information from prisoners, although that would probably violate all human rights laws.

Sure, Lou is a cute puppy, but as soon as they super-impose the CGI on his face he just becomes creepy. Some of the other dogs, like Peek the shaved poodle, and all of the cats except for the Russian Blue, are all ugly as hell even before they add the CGI.

As for the celebrity voices, they could have had the voice of God doing one of the dogs and it still wouldn't have made this movie enjoyable to me. Animal slapstick antics just aren't my cup of tea. And how do the dogs build all of their gadgets without opposable thumbs? Or clean up things like after the fight with the Russian Blue.

Okay, stretching myself to find anything to enjoy, I'd have to agree with you Patrick that of all the voice actors, Sean Hayes is the best. He seems to be the only one hamming it up enough and playing it over-the-top. Everybody else is so damn serious and sincere in their parts.

The makers of this movie might have been aiming it for kids, but personally I'd consider it child abuse to subject children to watching it.