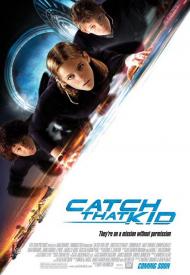 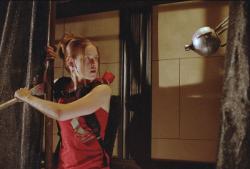 Catch that Kid is a fun little movie that unfortunately relies too much on slapstick humor. Although luckily it's fast paced enough that even when the humor is groan inducing and some of the action doesn't make much sense, it keeps ticking along at a good speed. Where Spy Kids took the spy genre to adolescent levels, Catch that Kid does the same for the heist movie.

Kristen Stewart, who you might remember as Jodi Foster's daughter in Panic Room, plays Maddy, a young girl who enjoys mountain climbing. When her family is unable to come up with $250,000 to pay for an operation for Maddy's father, Maddy decides to steal the money from the bank where her Mother (Jennifer Beals) is working as a security consultant. She enlists two friends, Austin the computer geek and Gus the go-cart mechanic to help her in her cause.

Like all heist movies, a good portion of the movie is centered on the planning of the robbery. Since they are just kids, they take a somewhat novel approach to their planning. Gus tells a sob story to a secretary about needing the blueprints of the bank for a school assignment, sweet-talking his way into getting them. Austin talks one of the managers of the bank into appearing in his student film so that he can get his voice on tape saying, "Turn off the alarms."

The final third of the movie is the heist itself and also like most heist movies, this is the best part. Even though never once did I think the kids would get hurt or land in jail or indeed, have anything bad happen to them. The movie is filmed well enough, that even in spite of this, some actual tension builds during the robbery as they must overcome guard dogs, a couple of very inept security guards who are the dumbest and weakest part of the movie, and of course, hi-tech gadgetry, some of which makes no sense whatsoever. (Just how do you use the top most safety deposit boxes anyway?) The movie even ends with a car chase, only in this case, the robbers use go-carts, in a scene which, when you compare it to a movie like Torque, seems quite realistic. At least this car chase isn't done with CGI.

Sure, this movie is silly, and at times overly so, but for a lightweight children's adventure story, it's entertaining enough. I'm quite sure that if I had seen this when I was nine-years old, I would have loved it. And even though I'm a long way past nine, I still found things to enjoy, even if they won't stay with me for very long. 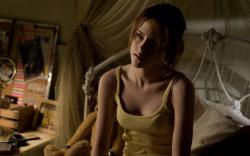 Catch That Kid is the most morally reprehensible piece of crap kids movie I have ever seen!

These kids justify robbery because they needed the money? How many real life criminals, currently in prison, would say that they did it because they needed it? At the end of the movie, there is no repercussion for the crimes that they committed. So the moral, boys and girls, is that it is okay to steal, drive recklessly, evade police and commit several other crimes if you can at least justify it to yourself.

Even worse than the robbery, is the emotional manipulation Maddy uses to get her two "boy" friends to help her. She goes to each of them separately and tells them that she likes them as a boyfriend. She then kisses them each to seal the deal. It gets even worse when later in mid robbery, one of the boys questions something Maddy is doing. Maddy barks at him; "I love you. Now do what I say!" So the second moral lesson here boys and girls is that it is okay for you to emotionally blackmail people to get what you want.

Of course, at the end of the movie, all three are still friends and none of the kids get in any trouble what so ever for the numerous laws they broke. This is a kid's movie! It does not have to teach a moral lesson, but to encourage a lack of morals is just plain disgusting! 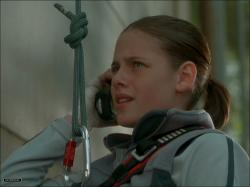 Eric has a minor point but is clearly overreacting to this silly children's movie. This could be a Frank Capra movie except for the fact that one scene is missing. The scene where the children are punished and are faced with admitting their mistakes and learning that what they did was wrong no matter what the reason. There is no such scene in Catch that Kid.

Besides that this movie is pretty bland and unmemorable, if not completely horrible. It's been less than an hour since I saw it and already it is quickly fading from my memory. The three main children are all fairly forgettable. Their one common trait seems to be that at an age when most of us are pretty awkward and goofy, they are all completely adorable. None of them is any great shakes as an actor however.

It's nice to see Jennifer Beals still working nearly a quarter of a century after her Flashdance fame.

I agree with Scott that as a kid I would have really enjoyed this movie. I predict that in 15 or 20 years this will be a nostalgic favorite for children of today.