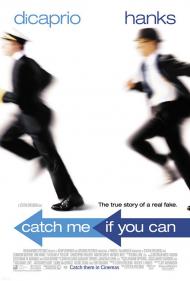 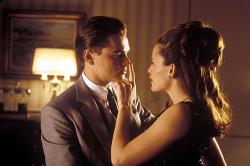 Leonardo DiCaprio and Jennifer Garner in Catch Me if You Can.

The old saying that "truth is stranger than fiction." couldn't possibly be better demonstrated than by the story of Frank Abagnale. He cashed over $4 million worth of fake checks. He successfully posed as a doctor, an airplane pilot and a lawyer. He did all of this before he turned 20.

Catch Me If You Can is based on this interesting life. Leonardo DiCaprio stars as the imposter. Tom Hanks plays an amalgam of FBI agents who pursued and eventually caught the counterfeiter.

With a bit of dramatic license taken , this movie tells the story of Frank Abagnale. His parents had financial problems and they moved to a cheaper residence. They soon get divorced and Frank runs away. To support himself he writes bad checks. This leads to forging checks. One day he sees some pilots in a hotel lobby, and he dreams of becoming one. He buys a suit and before you know it he is being treated like one by everyone who sees him in uniform. After the FBI get hot on his trail he switches to pretending to be a doctor. With a fake degree he gets a job being in charge of interns and nurses on the overnight shift of an emergency room.

Of course all of these situations lead to comedic opportunities. One of my favorite scenes is when he first gets to his new school and he pretends to be the French teacher. His mom is from France so it is a pretty easy masquerade. He got away with it for a week before anyone caught on. Another good sequence is where he reads in the paper that they compare him to James Bond. He immediately goes out and gets a suit made like one Sean Connery wears in Goldfinger.

Tom Hanks is an FBI nerd. He wears the prerequisite nerd glasses and has a odd accent. He has 2 partners who he doesn't relate very well to. Note his one bad, yet funny, joke. The agent and the forger play a game of cat and mouse. They occasionally cross paths as one nearly catches the other at different times in the movie.

The film covers only a few years of Frank Bangle's life, but this kid did so much in such little amount of time that it is plenty. The pace is good. The jokes are wonderful and the performances are outstanding. I am not a big DiCaprio fan. I never thought he was that good in Titanic. Here he is perfectly cast as the confident, flirty fake. Hank's is good as ever. His character starts as nothing really. But then layers get casually peeled away and his character develops.

At one moment a comedy and the next a drama. Spielberg balances the emotion very well. My heart went out to Frank's father in one scene, and in the next I was laughing as Frank found himself in another odd situation. The father is played brilliantly by Christopher Walken. His character is easily the most sympathetic. He could have easily come off as a loser, but Walken holds this characters head up high. Even when he loses it all Walken doesn't let this character fall apart.

If the film fails in any place it is that it isn't funny enough and it isn't dramatic enough. It is always a difficult balance and Spielberg has it evenly dished out. However, that also never allows any one mood to actually overcome the audience. So just when you find yourself in one emotion, the movie shifts you to another. Its a smooth transition but its never allows for a steady stream of feelings. 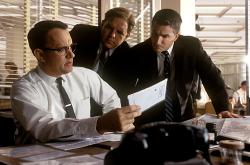 Tom Hanks in Catch Me if You Can.

For once I find myself in almost total agreement with one of Eric's reviews.  Except of course that I seemed to have enjoyed this movie more than he did and I didn't mind the shifts from dramatic to comedic.  In fact, I quite enjoyed the shifts and thought they worked very well.  The drama never becoming too melo-dramatic and the comedy never becoming slapstick.  I feel that the movie walked the knife's edge perfectly.

I too am no DiCaprio fan, but he is, as Eric said, perfect in this role.  He's one of those actors who will be stuck playing young adult roles long into middle-age.  Kind of a modern day Mickey Rooney with sex appeal.

Like many movies based on the idea of one person outwitting the establishment, surviving on their wits, and living the good life as a result, I was rooting for the criminal all along.  Like a white collar Bonnie & Clyde, Frank Abagnale ends up the sympathetic character, even though technically he's the 'bad guy' here.

There are a lot of nice moments in this movie.  Some of them Eric mentioned, the substitute teacher and the Bond moment, for instance.  But there are smaller touches that help make this movie stand out.  Frank's habit of peeling off labels from every bottle he comes across is both a nice character trait and a bit of interesting symbolism.

90% of all Spielberg movies are strictly about entertainment.  The other 10%, when Spielberg tries to make movies with meaning, he usually ends up, to my mind, being too heavy-handed and, to be honest, boring.  Fortunately Catch Me if You Can falls nicely into the 90% camp and is the most entertaining of his movies in a very long time. 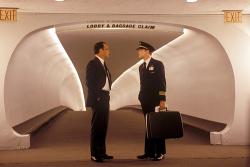 Tom Hanks and Leonardo DiCaprio in Catch Me if You Can.

I loved this movie! It gets my vote as the most thoroughly entertaining movie I've seen thus far in this millennium and my third favorite Spielberg movie ever, after Jaws and E.T.. Leonardo DiCaprio has given his definitive screen performance and in the process created a classic movie character. Frank Abagnale jr. combines the suave confidence of Rhett Butler with the cocky independence of Cool Hand Luke and, for the record, Leo should have been Oscar nominated. Spielberg, for his part, has given us a beautifully packaged reminder of what a great director is capable of. This movie is smart, gorgeous and nostalgic and told with real panache.

The relationships between all of the characters are well rounded and poignant. Like my brothers have already said Christopher Walken is awesome as Frank's dad and Tom Hanks makes his FBI agent Carl Hanratty, likable with his bumbling behavior and nerdy personality. The cat and mouse game between the two main characters eventually becomes a close bond as they are both lonely people in need of a friend.

The songs in the movie really add to the sense of time. Any movie that includes tunes by Frank Sinatra, Judy Garland and Nat King Cole gets a thumbs up in my book. And the many Christmas meetings between Frank and Carl makes this a great Holiday movie. In fact I plan on buying a copy to watch every year.

On a minor note, it was a pleasant surprise seeing Kitty Carlisle Hart in a cameo during the opening scene that takes place on the 'To Tell The Truth' television show. It seems impossible to believe that she is in her nineties.

Ultimately, although Spielberg has crafted a beautiful movie, it is the genius of DiCaprio that elevates it to classic status. The impossible schemes that he pulls off are only believable because of the absolute belief in himself that Frank Abagnale jr. has. My favorite scene is when Carl first confronts him in the hotel room and he is able, through pure bullshit and self-confidence, to get away. Don't let this wonderful movie slip through your fingers.