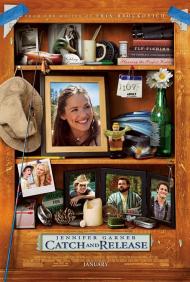 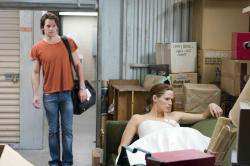 Timothy Olyphant and Jennifer Garner in Catch and Release.

The movie opens at a funeral. Gray is a beautiful young woman getting consoled by friends. To get away from it all, she goes up to the bathroom and sits in the tub. One of her dead fiance's friends, Fritz, comes in and porks a caterer, not knowing that Gray is behind the shower curtain listening to them. He later apologies for ruining the funeral. "Yeah, if it hadn't been for you, that would've been one great day." She sarcasticaly responds.

Over the course of the next few days Gray starts to learn things about her fiancé that she did not see coming. She also learns stuff about herself in the process. She falls in love with Fritz and discovers that her dead fiance's business partner has been secretly in love with her for a long time. Gray is very self involved.

The cast tries hard but it has so little to do. Garner is as sweet as they come but it takes Gray far too long to discover that the world does not revolve around her. Olyphant was great in Live Free and Die Hard, playing the bad guy, but here he seems less the romantic lead and more the type of guy a girl would date and then regret getting with after he left her pregnant and heart broken. Smith is constantly quoting someone for laughs, but none of the quotes are at all funny. Only Lewis's slightly dippy hippy generates any laughs.

At one point in the movie, all of the major characters are sitting around a table when Gray says, "I think catch and release fisherman are heartless weenies. I think putting a fish through agony for nothing more than your own entertainment is just plain cruel. I think if you're going to torture a living thing if, you're going to make it look into the eyes of its maker, face its own puny little place in the universe, then, for God's sake, have the decency to eat it!" However, by the end of the film Gray learns that just because you catch something does not mean you necessarily have to, or get to, keep it. This movie has some nice ideas but its chick flick pacing never lets it take off to any entertaining heights.