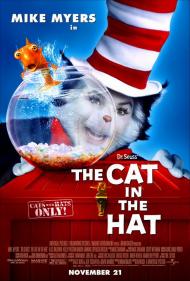 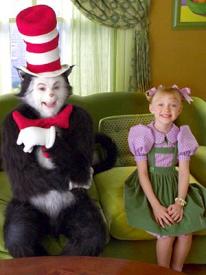 Mike Myers and Dakota Fanning in The Cat in the Hat.

As much as I regret saying it, being the huge Mike Myers fan that I am, The Cat in the Hat is just plain awful. Granted I'm not this movie's target audience, but even taking that into account, can't soften my opinion of this messy film adaptation of the classic children's book.

Like How the Grinch Stole Christmas, this Dr. Seuss adapted movie attempts to recreate the visual style of the book. The surreal look here tends more on the creepy side than the cute though, with its image of block upon block of duplicate houses, cars, and people. The end result is something like the Stepford wives on acid. An image that is further enhanced with the psychedelic visuals that come later.

The plot of the movie is as simple as that of the book. An odd cat, that teaches them how to have fun, visits two children left alone in their house on a rainy day. The additions to the plot, which still only manage to stretch the story to a thankfully short 70 minutes, include Alec Baldwin as the repulsive neighbor who wants to marry the children's mother and ship the son off to military school, and a very unfunny Sean Hayes of Will and Grace fame, as the mother's sanitary obsessed boss. The extra plot gives motivation to some of the madness but fails to make the movie more enjoyable, especially when I agreed with Baldwin's character that the son needs more discipline.

What bright moments there are to this movie come only due to Myers' performance as the Cat. Using a voice that is a cross between his Saturday Night Live character Linda Richmond and Bert Lahr's Cowardly Lion, Myers fires off so many jokes that inevitably, if too far between, some of them manage to evoke a laugh. His impromptu infomercial, when he gets to trot out his British accent, being one of them.

Wild visuals are constantly hurled on the screen in an attempt to assault the senses, but with little success. Without substance to back up all the special effects, its like eating cotton candy, sticky sweet and absent anything solid to enjoy.

At its heart, the movie seems to have good intentions, with its message of having responsible and balanced fun, but I always feel that talking about a movie's intentions is like telling someone that their blind date has a great personality. It's the last refuge from admitting that the date or, in this case, movie, is a real dog.

I always rely upon my brother Eric and his two sons to provide a child's eye-view of movies such as this, but in the case of The Cat in the Hat, I don't think I need to wait. Whether child or adult, this is a movie that fails in nearly every respect. 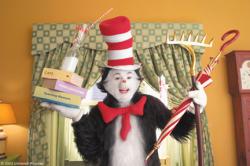 Mike Myers in The Cat in the Hat.

Scott wrote, "It's like eating cotton candy, sticky sweet and absent of anything solid to enjoy." Sometimes that is all you need to put a smile on your face. My sons liked this movie, especially my 7 year old. He received a Cat in the Hat toy shortly after watching this movie and was thrilled. You can always tell how well kids like a movie by how much they desire the tie in merchandise.

My favorite scene is when Thing One and Thing Two impersonate policemen and end up choking on the mother's license. The infomercial scene, that Scott liked, went over my kid's head. Children do not watch them, so they have no point of reference in getting the joke.

Scott also wrote, "...the movie seems to have good intentions, with its message of having responsible and balanced fun,..." That is the entire single message of the book. This movie seems to muck it up in a very early scene. Conrad dons a homemade outfit including a loaf of bread down the front of his pants for protection. He then slides down the stairs. Conrad obviously has an imagination and already knows how to have fun. What exactly is the Cat teaching him?

This is a entertaining enough movie that moves along at the pace of a 7 year old's birthday party. That is to say, it is sometimes frantic and sometimes all over the place. Still it entertained and put smiles on our faces.