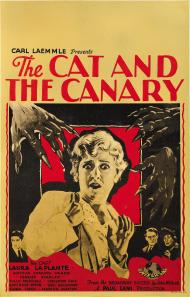 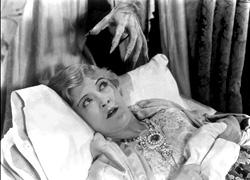 Laura La Plante and a scary hand in The Cat and the Canary.

The Cat and the Canary is an early example of a horror/comedy. Released in 1927 by Universal, the studio that would become famous for their horror classics, it demonstrates the heights of sophistication that silent movies had achieved by the time the sound era arrived. Stylishly shot with interesting and quirky camera work, creative title cards that are meant to visually express not just what, but how things are being said, and fast-paced editing, all added to a popular stage play, combine to create a truly memorable silent picture.

The plot has been done a million times since and was already a time worn cliché on the stage by the 1920s. An eccentric old man, living in a gothic hilltop mansion, dies. The instructions in his will stipulate that it must not be read for 20 years. By the time the 2 decades have passed his mansion is thought haunted by all the locals. The only resident is the man’s creepy old housekeeper.

On the 20th anniversary of his death his relatives gather for the reading of the will. There is an added stipulation that the named heir must pass a sanity test and if they fail it there is a second envelope containing the name of the next in line to the fortune. The heir is named to be a young woman cousin. The other relatives all decide to stick around to see if the girl passes the sanity test. They must spend the night in the scary old mansion and what’s more they learn that an escaped lunatic is on the prowl somewhere on the grounds.

The scares and humor are well balanced.

The hero is a nervous bookworm type that jumps at his own shadow but ends up the hero. Bob Hope would remake this movie playing this character in a 1939 talking version. Flora Finch steals the movie as old Aunt Susan. In one scene she tells her niece, “It’s not time to be catty, we don’t know who gets the money yet.” Later on she has had enough and runs screaming from the mansion in the movies’ funniest scene. Flora Finch had been making movies since 1908 and was one of the first funny female movie stars. Her final screen appearance was an uncredited cameo in 1939’s The Women.

The scares include a hairy, clawed hand that reaches out from several secret passages and the climactic villain wears a truly frightening mask. The use of shadows and light is technically brilliant. I would bet that Orson Welles saw this movie as a child because its influence on the camera work in Citizen Kane is obvious. The shot of the mansion at night looks very much like a similar shot at the beginning of Kane.

The title of the movie comes from the fact that before the old man died his relatives were driving him crazy like “cats around a canary”. There is a shot at the beginning with the old man surrounded by huge superimposed black cats. It is also revealed that the escaped lunatic thinks he’s a cat and rends his victims flesh with his teeth like they are canaries.

The Cat and the Canary is a seminal horror/comedy that, in one way or another, has influenced nearly every “Haunted Old Mansion Movie” (not to mention every Scooby Doo cartoon) made since 1927. 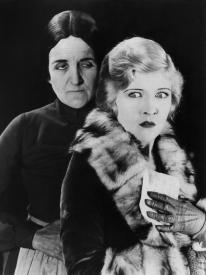 Patrick pointed out that the title of the movie refers to the old man’s relatives driving him crazy like, “cats around a canary”. This analogy is used several times early on. This did not make for a great start as I literally yelled at the screen, “We get it already!” Hell, we understand the reference when we see the title.

Luckily, the film gets better as it goes on, or should I say, “Races on.” The pace builds and builds. It starts with the moderate introduction of characters and the situation they are in. Soon, there is an escaped lunatic, a creepy doctor, some fights, over acting and lots of (silent film) screaming.

The Cat and the Canary often seems more like a 1930s screwball comedy than a silent slapstick. As Patrick mentioned, it demonstrates how sophisticated silent movies had become by 1927. It does not contain any larger than life stunts so common in silent comedies; although Creighton Hale spends most of the movie wearing Harold Lloyd type glasses.

As the movie picked up and people started coming and going at an increased pace, I was reminded of those early 1930s Marx Brothers films. Can you not picture them saying such lines as, “Why, Paul, I haven't seen you since nurse dropped you on your head.” And, “Don't interrupt me... I think I'm thinking!” It is not surprising that a talking version was made a decade later. 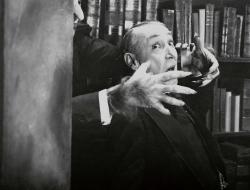 Tully Marshall in The Cat and the Canary.

Patrick mentioned Scooby Doo and that was one of the first things I thought of as the plot unfolded. It not only has the haunted house setting, but the character of Paul is as cowardly as Scooby or Shaggy. It's also about as scary as an episode of Scooby Doo, with one of the "scariest" moments coming when a hairy hand reaches sloooooowly through a hole in a wall to grab a necklace. This isn't so much a horror movie as it is an intentional parody of one. It also goes to show how old and tired horror movie cliches are when a film in 1927 was already making fun of them.

The camera work is rather sophisticated for the times. The camera moves in several shots, particularly in the POV ones, in a way that wasn't possible just a few years earlier and wouldn't be possible again for a few years after with the advent of the larger, unwieldy sound cameras. Likewise, as Patrick mentioned, the title cards are also integrated into the plot to convey mood and inflection as well as simple dialogue and information.

Unfortunately, the acting isn't as sophisticated as the technical aspects and is the film's only weak link. Some of it, particularly at the beginning, is the worst sort of silent film hamminess, something that by 1927 is rather inexcusable when a more natural style of acting had been demonstrated by other actors in other films. It gets away with it mainly because it's a comedy. Although it's the comedy that keeps the story so light that we aren't given enough character development and everything remains extremely slight and silly.

Patrick mentioned the 1939 remake, which starred Bob Hope and Paulette Goddard, but there have been 4 other remakes as well, with one as recent as 1979. It's easy to see why it's been done so many times. The plot is simple and there's plenty of room for laughs. This first version is lightly entertaining while being interesting to look at, but you can really see at this point that Hollywood was ready for movies with dialogue. The humor, which as Eric said, is more screwball than slapstick, would have been enhanced by spoken jokes.