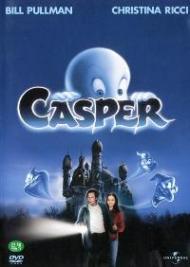 A friendly ghost and Christina Ricci in Casper.

This quick paced family film puts a fun spin on the old comic book about Casper The Friendly Ghost. With lots of star power and decent special effects, it nearly creates a classic. However, a questionable plot twist takes the movie into an area it should have steered clear of.

A para-normalist widower (Bill Pullman) moves into a haunted mansion with his daughter (Christina Ricci). He was hired by a gold digger who wants him to exterminate the ghosts living there so she may ransack the place of its supposed hidden treasure. The father and daughter meet the ghost of a dead little boy, Casper, and three mean spirited, yet humorous, ghosts that claim to be Casper's uncles.

The film is good Halloween fun with some cute lines. The Doctor and his daughter, Kat, learn to capture the ghosts by using vacuum cleaners. Upon getting vacuumed up one ghost announces, 'This sucks!' The most famous line in this movie is where Casper gets a brief moment as a real live boy and slow dances with Kat. He whispers in her ear 'Can I keep you?' It is a line he used earlier when in ghost form and it is how Kat comes to realize that the boy she is dancing with is actually a familiar ghost.

Near the end of the movie Kat's father dies. However, he sticks around as a ghost. By using a machine that Casper's father had invented they bring the Doctor back to life. In another scene Kat's mother appears as an angel dressed all in red? All of this takes this movie to a very gray area. If there are angels, then there is God. If there is God then resurrection is something that only God can do. In the Bible it was proof of Jesus' divinity. This is a children's movie. It should have just stayed with the ghosts as a mystical theme without the awkward introduction of these religious connotations.

One of the best ideas in this movie is all of the cameo appearances from unaccredited stars. Dan Aykroyd appears in GhostBuster garb. Mel Gibson and Clint Eastwood each flash their mugs.

This is a nice family Halloween movie. Just don't look to closely at it. Stay with the surface humor and hope your kids don't ask to many questions. 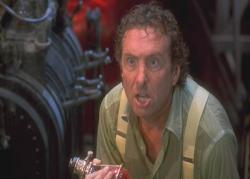 I think Eric's the one asking too many questions by trying to analyze this movie's religious implications, but since he did I have to say that nowhere in the movie does Kat's mom actually admit to being an angel. Casper asks if she is, but she doesn't say yes. Also, just because there's a heaven or angels doesn't automatically mean that there is a Judeo-Christian god and therefore who's to say that being resurrected is proof of divinity at all?

Having got that out of the way, I have to say that surprisingly I too found this movie to be an enjoyable Halloween romp of a kid's movie. While it's definitely aimed at the younger set, the humor works in a lighthearted enough way for people of all ages. And it definitely helps that the movie boasts such a fine cast, with, as a longtime Monty Python fan, Eric Idle being my favorite.

The other thing this movie has is heart. Too often when a children's movie tries to tug at the heart strings it just ends up being sappy and cringe inducing, but here it's mixed with enough humor and handled carefully enough that it really works. I'm not saying that it's Terms of Endearment, but it does manage some real emotional resonance during the scene when Kat dances with Casper.

A pleasant and humorous diversion, I'm just wondering why they never made a sequel to this one. 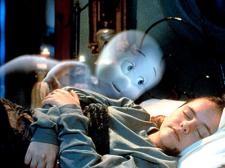 I remember thinking, when this movie came out, what a terrifically bad idea it seemed. Now, fifteen years later, I’m man enough to admit I was wrong. Surprisingly, Casper is both clever and charming. It is also funny, especially the three uncle ghosts. “He looks like Oprah on hiatus.” And any movie that can successfully work an Apocalypse Now and a Wizard of Oz impression into the same scene is OK in my book.

Eric, I agree about the pacing. The story really chugs along. The resurrection angle didn’t bother me though. This is just a harmless children’s movie designed for entertainment. Which is what I would say to any child who happened to be confused by it.

The cast is good. I really liked Ricci. From start to finish the relationship between Kat and Casper is genuine. The cameos by famous stars were good. Rodney Dangerfield: “I had a face lift and there was another one just like it underneath.”

I did think, apart from Kat and Casper’s dance, that the last 40 minutes or so was not as good as the beginning. Still I enjoyed Casper much more than I ever expected to.